Despite its super accommodative monetary policy, Japan will probably join the group of economies that shrank in the first quarter of the year when Q1 GDP growth figures come out on Wednesday at 00:50 GMT. A slowdown in April’s exports on Thursday (00:50 GMT) and a huge inflation spike on Friday (00:30 GMT) may point to a discouraging start to the second quarter as well, further downgrading the outlook for the economy. That said, the bruised Japanese yen managed to gain some ground on the back of its safe haven status, and the recovery may have just started.

Japan to enter contraction in Q1

The Japanese yen claimed its first weekly gain after two months of continuous harsh selling that squeezed it to a two-decade low against the US dollar. The recovery took place after the US economy unexpectedly announced a contraction in the first quarter, raising concerns that an aggressive policy tightening by the Fed could further damage the economy more than it may balance inflation. As a result, investors sought safety in traditional bond markets, pressing the US Treasury yields lower; the widening spread between the rising US yields and the muted Japanese equivalents have been weighing heavily on the yen and the latest pause has finally breathed some life back into the yen.

The question that arises now is whether the yen will sustain its weekly advantage as a barrage of data releases are expected to paint a picture of a sluggish economy that cannot efficiently benefit from persisting negative interest rates and the massive bond buying delivered by the Bank of Japan (BoJ). Analysts estimate an annualized contraction of 1.8% and a quarterly decline of 0.4% in the three months to March from an expansion of 4.6% and 1.1% previously. Recall that household spending diminished 2.3% in real terms in March from the previous year, while consumer confidence faced another deterioration in April. Hence, an economic downturn is now looking increasingly likely. 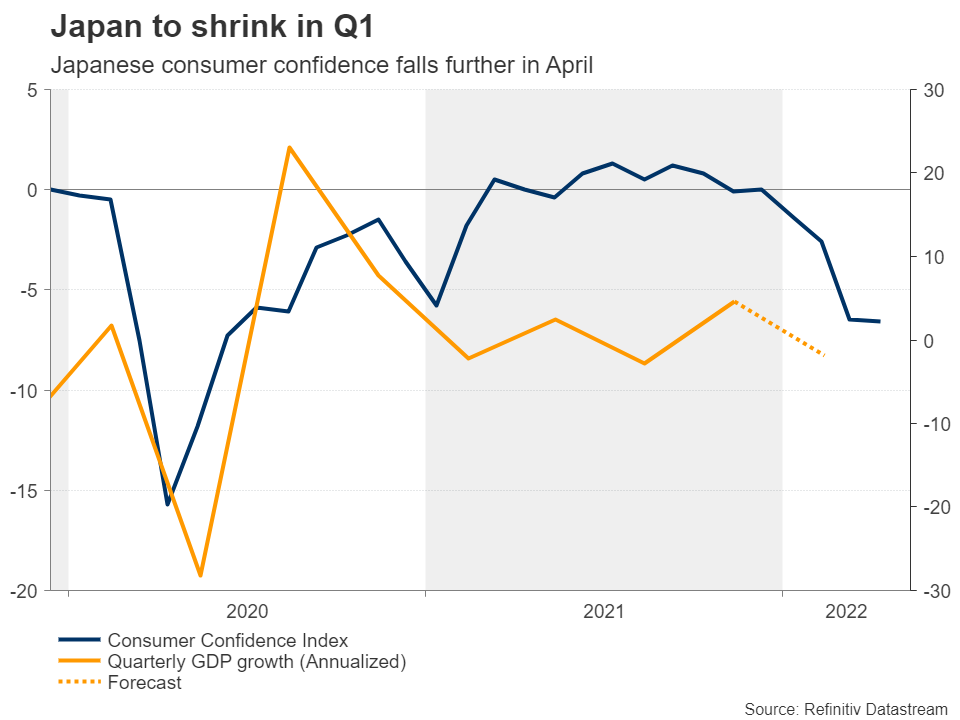 Other data will indicate that April has not been kind to the economy either. Exports are said to have risen at a softer pace of 13.8% y/y compared to 14.7% previously, whilst imports are forecast to surge from 31.2% y/y to 35%.

Although Japan is famous for its deflationary mindset, rising input prices from energy to corn and transportation costs have probably forced businesses to pass on costs to consumers in April, especially as a considerable depreciation in the Japanese yen, which is the longest in 50 years against the greenback, has exacerbated the impact from surging raw material prices. The producer price index jumped by 10% y/y in the same month, data showed on Monday, while Friday’s national core CPI figure is expected to stage a huge bounce up to 2.1% y/y from 0.8% previously for the first time in seven years. 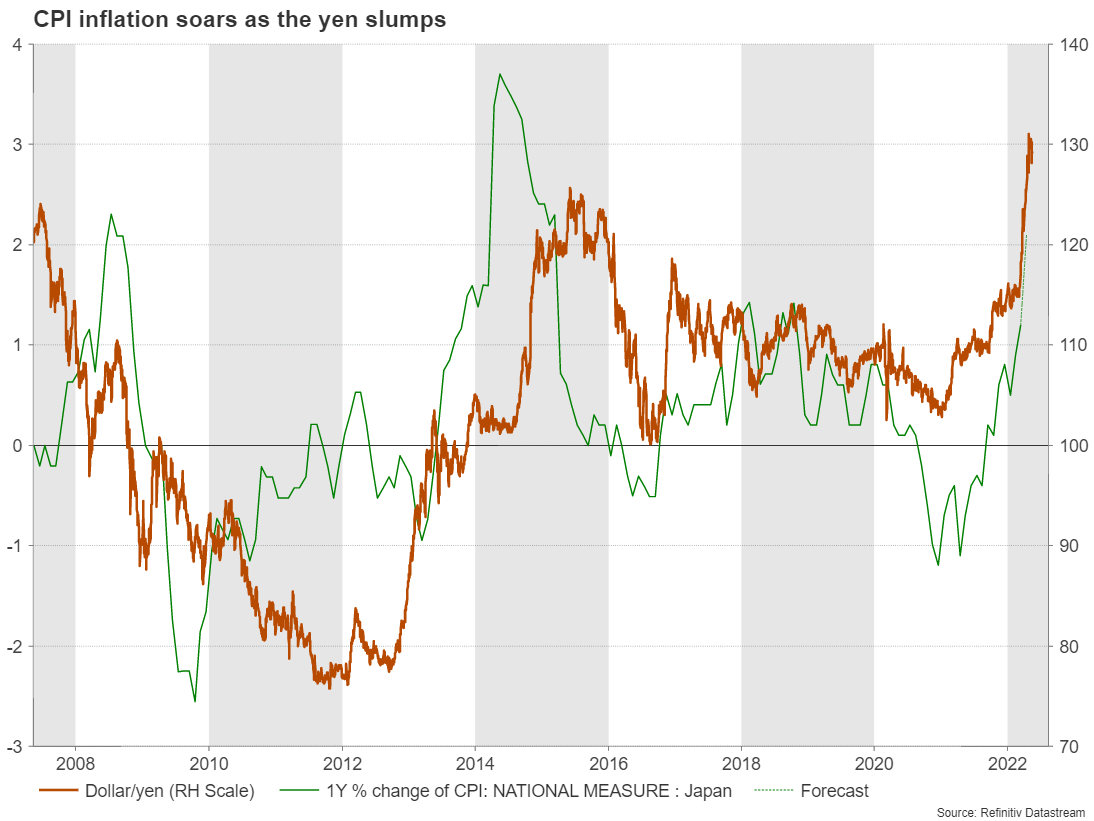 Demand for safe havens could help the yen

However, it’s worthy to note that the FX depreciation effect varies by company. Businesses who depend on imports and serve mostly local markets such as Sony face bigger currency headwinds than companies in the car and software industry whose production lines are overseas and are less affected by FX volatility.

Nevertheless, the BoJ governor clearly said on Monday that the central bank is not targeting FX markets even though recent moves in the currency were undesirable, and it will patiently continue monetary easing. Should bond yields keep losing steam this week, a worse-than-expected GDP report could strengthen the yen’s safe-haven status, pressing dollar/yen back to the 127.50 – 126.93 support region. A steeper inflation upturn could bolster the bullish action later in the week, with investors likely looking next at the 125.00 level and the 50-day simple moving average.

Alternatively, if easy monetary settings deter a contraction or allow a milder economic decline, with inflation arriving weaker-than-expected too, the pair may push above the key 129.20 resistance with scope to test the broken supportive trendline around 130.80 and the previous top of 131.24. Higher, the spotlight will turn to the 132.30 – 133.40 zone taken from early 2002.