The Swiss National Bank is expected to step up its fight against inflation when it sets its benchmark interest rate on Thursday at 07:30 GMT. The consensus points to a full percentage point increase and policymakers may have a good reason to listen to investors and boost the already strong swissie.Currency advantage

Excluding the US dollar, the Swiss franc has been outperforming other major currencies since the start of the year, beating the euro and the pound by 6% and 10% respectively. Given that the eurozone market accounts for 55% of Swiss exports, a strengthening currency would normally motivate some negative verbal intervention from SNB policymakers to balance the unwanted appreciation in FX markets and keep products competitive abroad.

Circumstances, however, are different now. Inflation keeps trending at multi-decade highs around the globe in the face of post-pandemic supply constraints and the war in Ukraine, and a dynamic currency is something every nation would desperately like to own as a sort of defence mechanism to high imported prices. Another explanation for the relatively milder inflation is the different technologies used in Switzerland to generate electricity. Only 1.0% of the Swiss electricity relies on oil and natural gas, while almost 60% depends on hydroelectric and 35% on nuclear power.

Nevertheless, with the headline CPI further distancing above the central bank’s 2.0% target, unlocking a three-decade high of 3.5% in August, the SNB will probably fasten its tightening plans after delivering a surprising 50 bps rate hike in June ahead of the European Central Bank.

Commenting at Jackson Hole, the SNB chief admitted that inflation has become a broad-based phenomenon and increases in consumer prices are now more easily acceptable. What was even more striking, is that he unexpectedly opened the case for a full percentage point rate increase at a time when the Fed chair was downplaying a similar action in the US, with futures markets currently providing a probability of almost 70% for such a scenario. 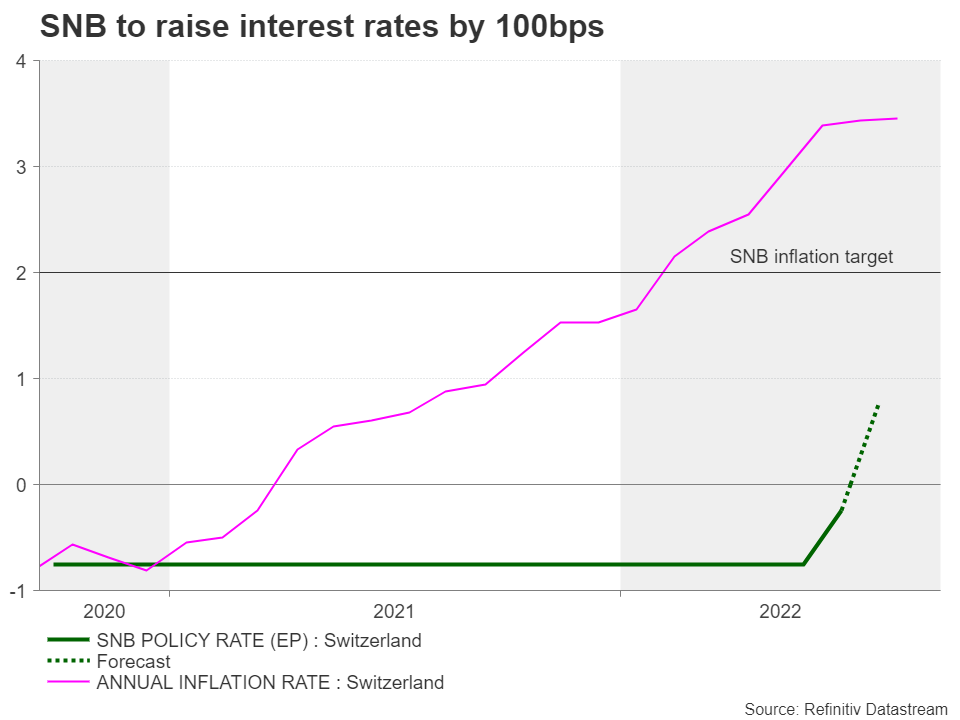 Well, although this type of aggressive action has been rare so far among major central banks, with the Bank of Canada and Riksbank being the only to move forward with a quadruple-sized rate hike, one might wonder why such a scenario would not materialize in Switzerland as well.

Monetary divergence has been a major booster for currencies this year, and the SNB is still lagging behind the ECB and other major peers, as global inflation is not expected to ease anytime soon. Hence, a bold increase in borrowing costs could narrow the gap between the Swiss and Eurozone 10-year bond yields, helping the Swiss franc to secure some footing against the euro.

Of course, the central bank could intervene in FX markets to protect the swissie. The strong correlation between the falling SNB sight deposits and the steep downfall in euro/swissie, if not accidental, suggests that the central bank has already proceeded with intervention. In any case, that could be more evidence that an overvalued swissie is not causing headaches for the SNB anymore. 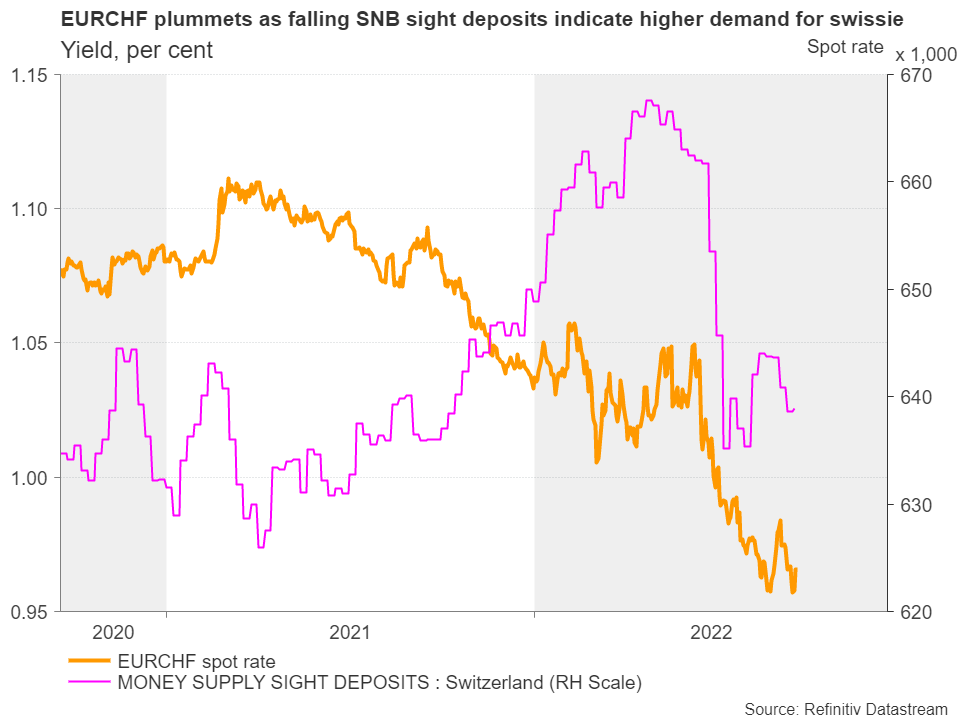 As regards the outlook for the economy, the latest release from the State Secretariat for Economic Affairs (SEKO) revised its GDP projections to the downside. The expert group is now seeing a 2.0% expansion for 2022 and 1.1% for 2023 from 2.6% and 1.9% respectively, citing the tense energy situation in the eurozone, which could consequently result in production stoppages and weigh on the Swiss export business.

That said, growth is not a priority in the central bank world and the latest data releases are far from concerning at the moment, showing a strong trade surplus, a tight labor market, and a persisting recovery in retail sales following the plunge in April. Hence, a hawkish policy announcement cannot be ruled out.

Turning to FX markets, the Swiss franc could advance in the wake of an extraordinary 100bps rate hike and signals of additional bigger moves, especially against the battered yen, which is suffering from the BoJ’s stubborn dovish stance. Euro/swissie could be interesting to watch too, as the pair is trying to return above the 2015 trough of 0.9649. A hawkish rate decision could leave the pair below the 20-day simple moving average (SMA) at 0.9683, bringing the double bottom pattern around 0.9580 under examination. Breaking lower, the focus would turn to the 0.9500 psychological mark.

Alternatively, a more conservative 75 bps rate increase could disappoint investors, helping the pair to crawl up to the 50-day SMA at 0.9725, unless the central bank uses a strong verbal intervention to cancel any selling pressures in the currency. If not, the recovery could get congested higher near the 0.9828 barrier. If not, the bulls would head for the 0.9950 - 1.000 resistance region.

It's also worthy to mention that the SNB meets only four times per year. Therefore, if it wants to catch up with other key central banks, it will need to go big this month ahead of its December gathering. Otherwise, it could hold emergency meetings in the event of sudden negative economic incidences, but that usually creates more panic among investors.