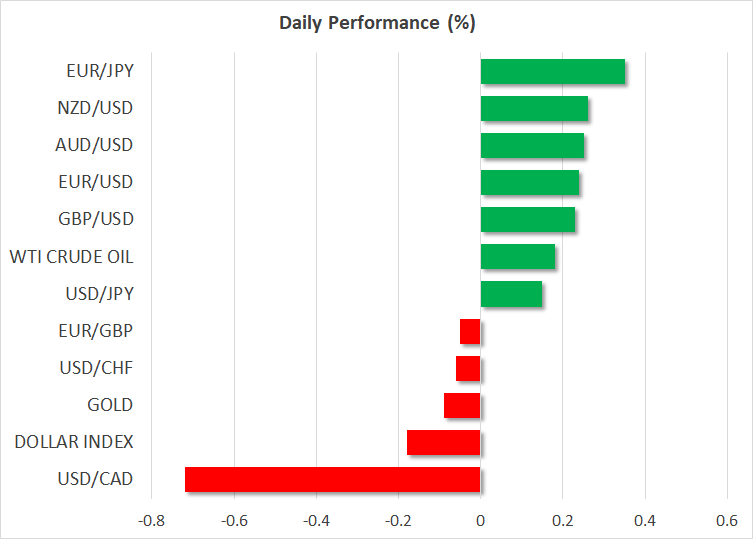 The Federal Reserve took its biggest step yet towards scaling back its pandemic stimulus on Wednesday following the conclusion of its two-day policy meeting. As expected, the Fed kept its policy unchanged but signalled that “a moderation in the pace of asset purchases may soon be warranted”.  Chair Jerome Powell indicated that the Fed has already met its inflation goal for tapering, while all it would take to satisfy its employment test is another “reasonably good” jobs report.

His remarks make a November taper announcement almost certain, marking the end of an era of unprecedented stimulus for the US economy. But markets took the hawkish signals in their stride, with shares on Wall Street holding onto their session gains after the announcement. Powell’s suggestion that tapering could end in the middle of next year likely reassured investors as this was a longer timeline than the end of Q1 2022 that some FOMC members had hinted at.

However, what was more striking is that markets barely reacted to the updated dot plot chart. Policymakers are now pencilling in three rate hikes in 2023, which is slightly more hawkish than expected, but were split about the timing for the first rate hike, with half the committee expecting liftoff in 2022 and the other half in 2023.

The notably hawkish tilt boosted the greenback, pushing the dollar index to one-month highs, as the short end of the US yield curve steepened following the meeting.

However, the dollar is paring those gains today as long-term yields failed to catch up. The yield on 10-year Treasury notes slid on Wednesday and is up only modestly today. The lack of any hint of a taper tantrum in Treasuries is one explanation for why the FOMC outcome was greeted positively by stock markets. If the bond market is signalling that interest rates won’t rise much in the long run and the Fed’s early action will likely be enough to keep a lid on inflation, then that’s good news for equities.

The S&P 500 closed up almost 1% yesterday, ending a four-day losing streak. The Dow Jones and Nasdaq Composite were up by a similar amount and US futures were pointing to solid gains for today as well.

Some angst about US debt ceiling and Evergrande

A bigger worry, though, for US Treasuries in the near term is Congress stalling on raising the debt ceiling on federal government borrowing. The House has already approved a bill for averting a possible government shutdown at the end of the month and suspending the ceiling so as to avoid a default. But the Senate has not even yet set a date for when it will debate the bill.

For now, there’s no sign of much panic but anxiety could increase in the coming days.

In broader equity markets, the mood was mostly upbeat, as fears about a global fallout from Evergrande’s debt crisis eased further on Thursday. The Hang Seng index rebounded by 1.2% as Evergrande shares surged after the company said it reached a settlement with a major domestic bondholder on the interest payment that’s due today.

However, investors remain nervous about Evergrande’s cash flow problems as it’s still unclear whether it will be able to meet the payments for its dollar-denominated bonds.

In the FX sphere, the Canadian dollar was a surprise winner from the Fed meeting, jumping more than 1% over the last 24 hours. Despite the FOMC’s predictions of three rate increases in both 2023 and 2024, markets might be thinking the Bank of Canada will likely outpace the Fed over the coming years when it comes to policy tightening.

The Australian and New Zealand dollars also advanced firmly today, and the euro and pound weren’t far behind. The euro climbed back above the $1.17 handle as the US dollar was unable to hold onto yesterday’s gains. Traders ignored weaker-than-expected flash PMI numbers for September out of the Eurozone today.

Sterling was also on a steadier footing ahead of the Bank of England policy decision at 11:00 GMT. There’s a risk the BoE will cut the target of its asset purchases from the current £895 billion and pave the way for a rate hike in the first half of 2022. But investors aren’t as optimistic about the outlook given that the UK is facing a much more severe energy and supply shortages crisis than other countries.

There was little reaction in the Swiss franc after the SNB’s dovish hold at its meeting today. 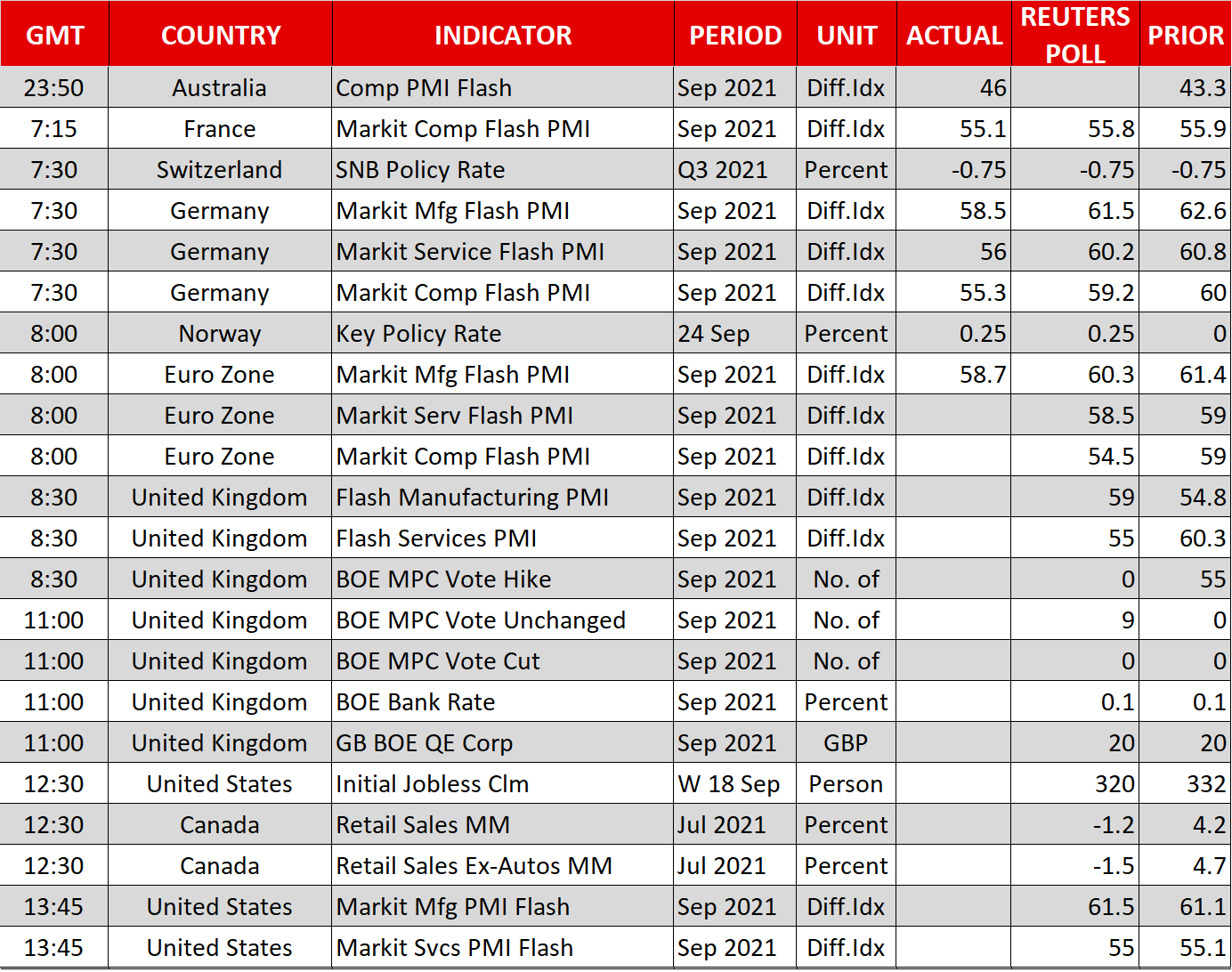 US Open Note – Inflation risks and the rate conundrum, dollar hangs in there