Gold has managed to stage a stellar recovery recently, gaining more than 10% since November 3, when it hit support at $1,615 for the third time in less than two months. Hoping that the Fed may need to proceed much less aggressively with interest rate hikes hereafter, traders may be scratching their heads as to whether this can translate into more gains for the precious metal.Gold no longer a safe haven

In the past, gold was considered a safe-haven asset, attracting flows during periods of market turbulence and anxiety. It was also viewed as an investment that could counter the impacts of rising inflation. Nevertheless, both narratives don’t seem sound any longer as the metal lost more than 20% in an environment of sky-high inflation and rising risks of a global recession.

Yes, gold hit a record high in August 2020 as investors sought shelter in the metal due to the outbreak of the coronavirus pandemic and came just shy of retesting that record in early March due to Russia’s invasion of Ukraine. It was all downhill thenceforth even with concerns around the global economy not taking the back seat. On the contrary, market participants became more nervous that the world could slip into recession as inflation spiraled out of control due to the supply shortages caused by the pandemic and the war.

Why did the narrative change?

Usually, gold wears its safe-haven suit and acts as an inflation hedge during periods when central banks are cutting interest rates in order to boost economic growth and revive inflation. In recent years, central banks accompanied their easing policies with massive bond purchases, which assisted in dragging yields down. Therefore, in a zero-yielding environment, the precious metal may have been the asset of choice within many portfolios.

Now the picture is not aligned with that normality. Yes, the global economy is on the verge of recession, but with inflation getting out of hand, central banks around the globe have been setting the fight against inflation as a priority rather than the restoration of economic activity. Thus, as interest rates around the globe rose at a fast pace this year, the non-yielding gold lost its allure. The title of the ultimate safe haven was passed to the US dollar as with the Fed raising rates more aggressively than other major central banks, it became the only safe-haven currency that also offers high yields. Gold has therefore developed a positive relationship with equities and a negative one with the dollar. 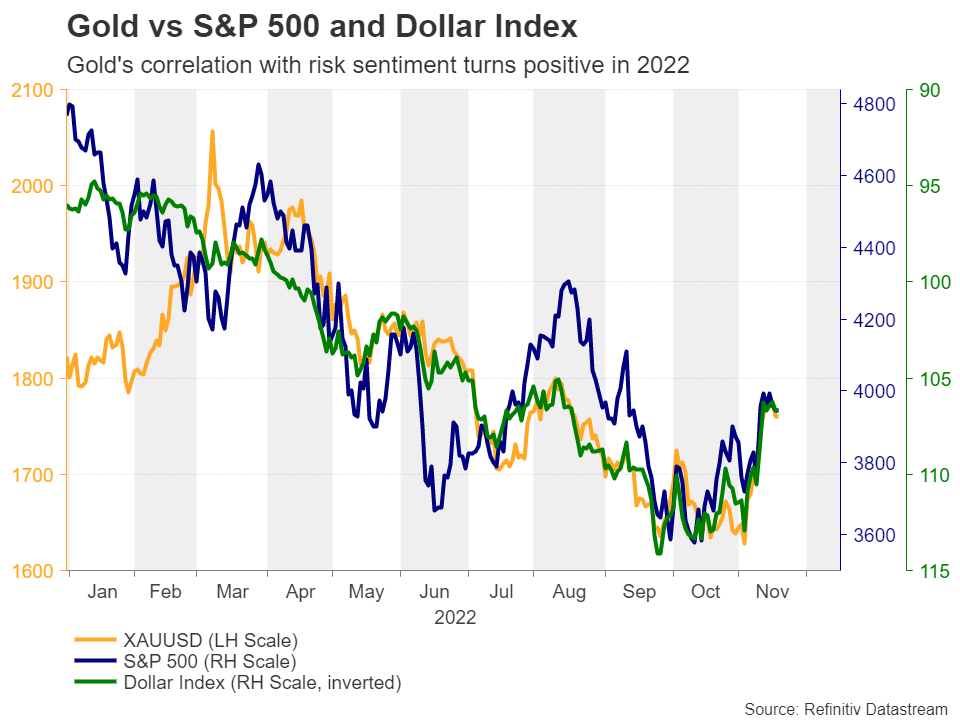 However, its safe-haven appeal may have not been fully lost. Although positive, its correlation coefficient with the S&P 500 – calculated since the beginning of the year - is less than 0.2, which means that the dollar may have stolen more of the metal’s shine rather than the broader decrease in risk appetite. Indeed, gold’s inverse correlation with the dollar is much stronger, with a coefficient of -0.45, while for euro and pound traders the metal did not lose that much of its value.  It is worth noting, that following this month’s recovery, gold/pound is back close to its record high. 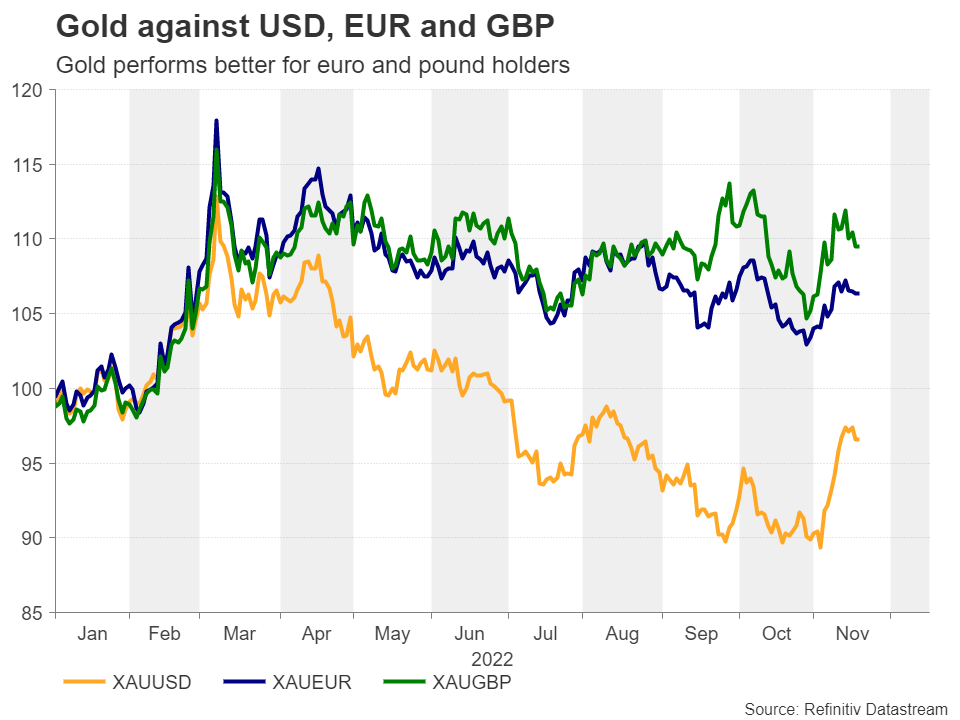 All this makes it easier to understand why gold has staged such a comeback this month. Expectations with regards to aggressive tightening by the Fed have notably eased recently, especially after data showed that US inflation slowed by more than expected in October. Market participants are now nearly fully convinced that the Committee will proceed with a smaller 50bps hike in December, after delivering four consecutive 75bps increments, while they are pricing in almost two quarter-point rate cuts by the end of 2023. This shift in market expectations has weighed on Treasury yields and the greenback, thereby helping gold to rise by more than 10%. 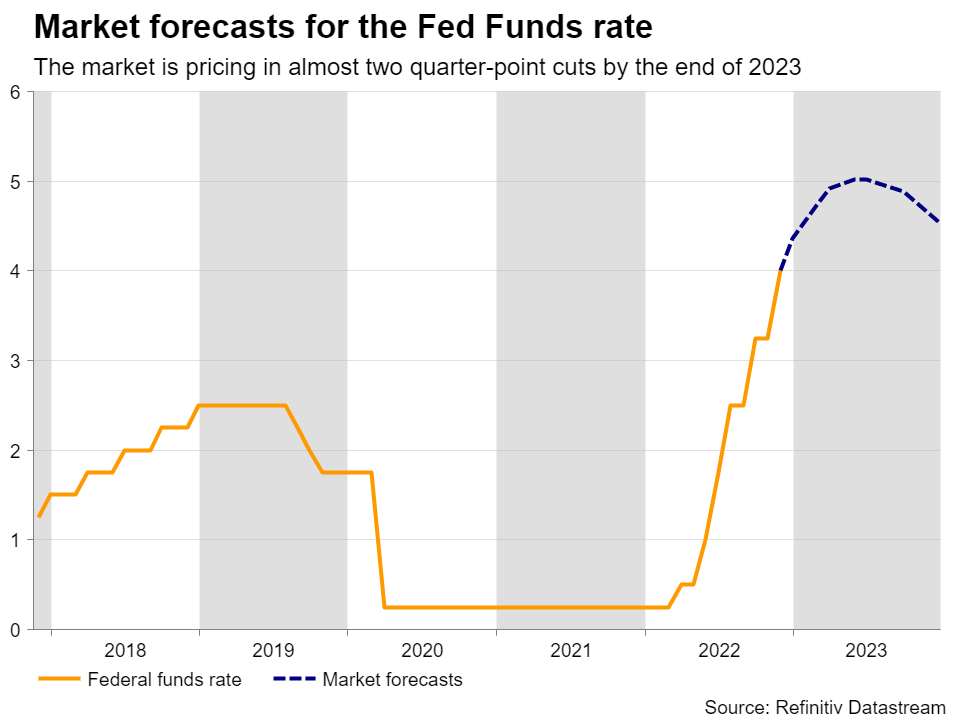 Now the big question is whether the recovery could continue for longer. Further data and remarks supporting the case of a less aggressive Fed may indeed help the precious metal to sparkle more. However, the market’s pricing of two quarter-point rate cuts by the end of 2023 seems more dovish than recent Fed communication. Although most officials agree that slower rate increases may be appropriate hereafter, some of them have been holding the view that when interest rates hit their terminal level, they are likely to stay there for a while.

Therefore, any developments pointing to even a slightly more hawkish rate path compared to the one anticipated by the market could well revive bond yields and the dollar, and thereby bring gold under renewed selling interest. So, the current rebound may only be a large upside correction, which could very well get extended, rather than a full-scale bullish reversal.

From a technical standpoint, the latest rally took gold above the downtrend line taken from the high of March 8, but most importantly above the inside swing high of October 4 at $1,730, thereby completing a complex double bottom formation. With the price also above all three of the plotted moving averages, this likely means that some further advances may be on the cards. Nevertheless, there is still a long way to go before the bulls hit new record highs, and the risk for the recovery to be halted soon remains decent.

On the downside, a break below the temporary floor of $1,615 may be needed for the prior downtrend to come back to life. Such a break could verify the metal’s return below the downtrend line taken from the high of March 4, and also confirm a lower low.  The bears could initially target the low of April 1, 2020, at $1,565, the break of which could carry larger bearish implications and perhaps pave the way towards the $1,455 area which was attracting buyers between October 1, 2019, and March 20, 2020.