Alibaba is set to announce its fourth-quarter financial results on Tuesday before Wall Street’s opening bell. The company’s shares have been plunging in the past year as the online retail behemoth was caught in the middle of a major regulatory crackdown on multiple sectors of the Chinese economy. The firm is anticipated to experience a deceleration in sales growth, despite likely posting its highest revenue figure in the last two years. The consensus recommendation from Refinitiv analysts is ‘buy’, indicating strong growth prospects for the firm.

Alibaba shares underperformed in 2021 amid lingering macro and regulatory risks

China is experiencing several macroeconomic risks, including the Evergrande debt crisis, slowing economic growth, and consumers turning more cautious lately. Although all the aforementioned factors pose a threat to the firm’s general performance, the recent 2.2 percentage points deceleration in December’s retail sales figure may have directly impacted Alibaba’s Q4 financial results, considering that e-commerce is the main driving force behind the firm’s revenue.

To make matters worse, major Chinese tech stocks took a hard hit after the Chinese government decided to strengthen regulatory oversight. The crackdown started with financial service providers but quickly spread to e-commerce companies and tech firms, such as Alibaba. In this uncertain environment, Alibaba's stock started to give up ground, as investors have been considering the wide range of surfacing risks. 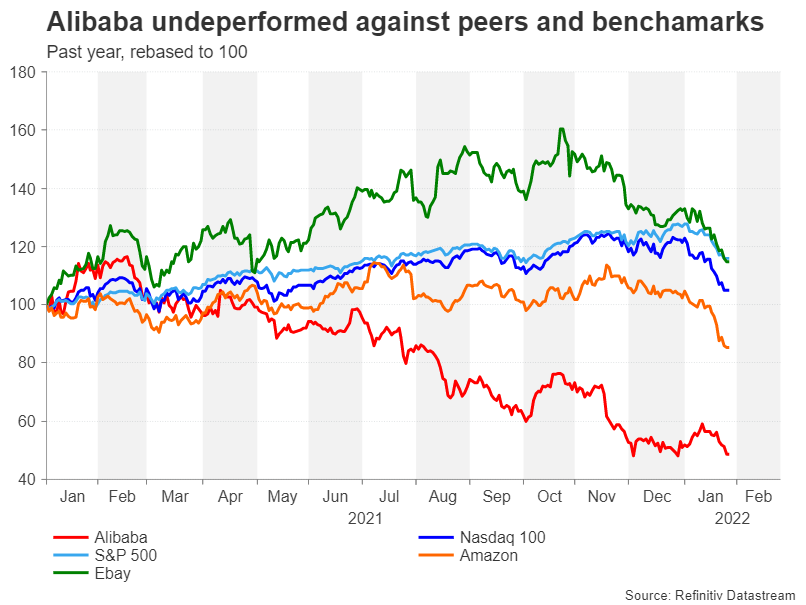 The PBOC recently committed to ease monetary policy, significantly diverging from the Fed’s upcoming tightening. The acceleration of the rate hike timeline by the Fed significantly weighed on the valuation of high-growth firms, triggering investors’ rotation from growth to value shares. Therefore, with its US competitors getting hammered by the prospect of tighter Fed policy, Alibaba may find an extremely favorable environment to expand and grow in 2022, attracting investors’ buying interest. However, it should be acknowledged that the Chinese government continues to openly object against the consolidation of power and wealth within the fast-growing tech sector, which serves as a reminder that regulatory crackdowns still pose a major headwind for the firm.

Mixed financial figures are expected for Alibaba. Revenue is anticipated to rise at its highest figure in the last two years, but growth is projected to massively decelerate. Additionally, earnings are expected to take a substantial hit as the company started to rely more on lower-margin retail businesses, while it also kept reinvesting a substantial part of its earnings for the research and development of new products. For instance, Alibaba has announced that it will develop an advanced server chip that offers extremely high speed and has the potential to significantly improve the firm’s cloud services.

The retail giant is expected to post revenue of $246 billion for the fourth quarter, according to consensus estimates by Refinitiv IBES, which would represent year-on-year growth of 11.26%. Additionally, earnings per share (EPS) are estimated to increase from $11.20 in the previous quarter to $16.13, though this would still represent a decrease of 26.8% on an annual basis.

Although Alibaba experienced a blockbuster performance during the Covid-19 era, currently the company is facing tough challenges due to the uncertain outlook of the Chinese economy. The firm is currently undervalued with a trailing 12-month price to earnings (P/E) ratio of 13.4 (as of January 27, 2022), which is lower than its sector’s median of 17.66. Moreover, its forward 12-month P/E ratio is currently at 12.7, with most of its major competitors reporting a higher figure. Therefore, these indications might suggest that markets are pricing in low growth prospects for the firm, or that the company is sacrificing its short-term performance by spending a significant amount of its earnings to achieve high growth and expand in multiple sub-sectors in the future. 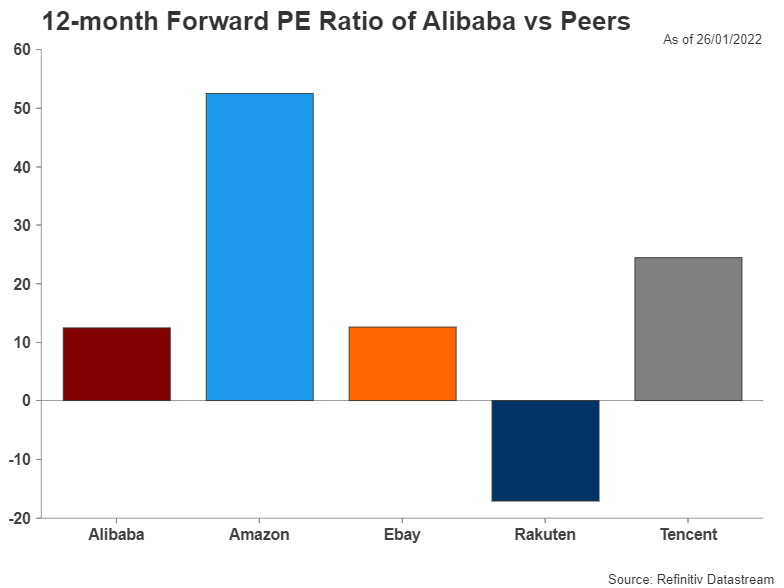 Taking a technical look at Alibaba, a negative long-term outlook can be observed as the share price has been losing ground since the last quarter of 2020 and is currently trading in levels last seen in 2017.

If the company manages to play an impressive earnings card on Tuesday, the price might ascend towards the $138 region before the spotlight turns to the $170 hurdle.

On the flipside, should the earnings disappoint, the price may test the recent low of $108, a violation of which would send the price to test the $87 obstacle.