With the new UK Prime Minister not expected to be announced until next week, Brexit news could remain scarce for now, shifting the focus back to data. Inflation figures for June are due on Wednesday, before retail sales numbers on Thursday, both at 08:30 GMT. The pound remains at very low levels as fears of a no-deal Brexit have returned, and while the worst may not be over in this sense, there is a saving grace: further weakness in the US dollar that offsets losses in sterling.

The British currency is back under the microscope, as the person that will likely become Prime Minister next week – Boris Johnson – continues to promise that the UK will leave the EU on October 31 “come what may”, hinting at a no-deal Brexit if an agreement isn’t reached. Admittedly, some of that may be political theatre aimed at generating negotiating leverage, echoing Theresa May’s famous catchphrase: “no-deal is better than a bad deal”.

What makes Johnson’s threat more credible though, and therefore terrifying for the pound, is that the Tories have lost so much ground in opinion polls lately that their next leader could truly consider leaving without a deal, for fear of losing more support as a party if Brexit is delayed again. Most of their voters have defected to the Brexit party, which means they are losing ‘hardcore Brexiteers’, and thus amplifies this argument. In a nutshell, the risk of a no-deal is as prominent as ever. 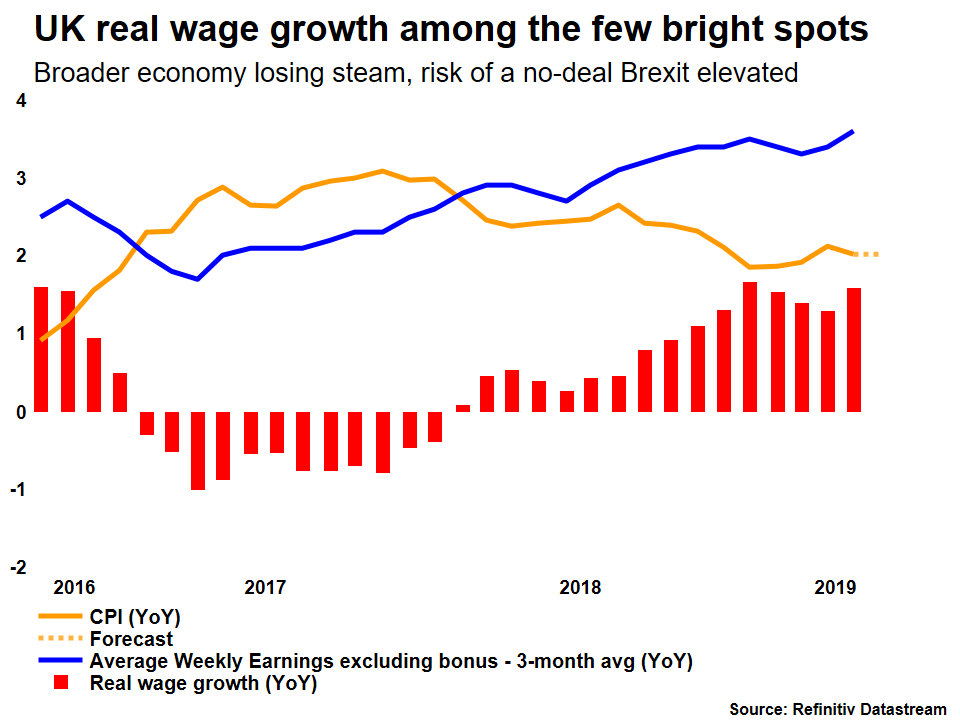 Taking a step back from politics, the upcoming data may also attract some attention. Inflation figures for June are forecast to show little movement, with the headline CPI rate expected to have held steady at 2.0% in yearly terms, and the core rate to tick up to 1.8% from 1.7% previously.

Meanwhile, retail sales are projected to have declined somewhat on a monthly basis, though such prints would still lift the yearly rate, as the plunge back in June 2018 – the month that will drop out of the yearly calculation now – was more severe.

Mark Carney, the Bank of England (BoE) chief, changed his tone recently by indicating that trade tensions combined with a slowing global economy have amplified downside risks for the British economy. This may be an early hint the Bank will abandon its rate hike plans soon, though admittedly, that will hardly be a surprise for markets – which currently price in roughly even odds for a rate cut before year end.

Overall, the outlook for the pound remains bleak, as the growing threat of a no-deal Brexit accompanied by a dovish BoE imply more pain. That said, the potential saving grace for the British currency may be further weakness in the US dollar, as the Fed can cut rates much more than any other major central bank, pushing the greenback lower over time. Since the FX market is a zero-sum game, in that weakness in one currency must translate to strength in another, this could limit any severe losses in the pound.

Taking a technical look at sterling/dollar, further declines may stall around 1.2440, the July 9 lows, with a bearish break opening the door for a test of 1.2360 – the April 2017 trough.

On the upside, a clear break above 1.2580 could see the bulls challenge the 1.2660 zone initially, which capped multiple declines in late June.