Monthly GDP growth readings for the month of August will come out of the UK on Thursday at 08:30 GMT and forecasts argue for a pullback in expansion as recent data out of the services sector have already warned. While the Brexit turmoil is holding the central bank’s hands tied, policymakers may not wait for long to join the dovish camp.

Where are we on Brexit?

The UK Prime Minister Boris Johnson has submitted a new Brexit proposal to the European Commission last week, offering a new solution to the sticking issue of the Irish border. Johnson’s idea wants Northern Ireland to leave the EU’s customs union with the rest of the UK after the transition period but remain in the EU’s single market and continue to follow the bloc’s regulations on agricultural, food safety and industrial goods. In addition to this, the Irish government would be allowed to debate its trade arrangements with the EU every four years. This also follows May’s three-time rejected plan which aimed to create a common rulebook between the sides for industrial goods and agricultural products, end free movement but avoid a hard border between Northern Ireland and the EU’s Ireland and Northern Ireland and Britain.

While Johnson’s plan was not as harshly criticized as May’s one, the EU said it is not in favor of it either, increasing the odds for another delay or a disorderly Brexit on October 31.Based on the law signed by the British parliament in September, the UK Prime Minister is obliged to ask a three-month extension to Article 50  if no compromise is reached between the sides until the two-day EU summit in Brussels on October 17-18. Johnson, however, has clearly threatened he will drive the country out of the Union with or without a deal, something that could trigger a no-confidence vote against him and likely early elections.

Given Conservative’s lack of majority in the Parliament, the UK PM would likely avoid the latter and send the requested letter instead, extending the Brexit deadline to the end of January 2020. But reports on Wednesday stated that several ministers from the Cabinet are poised to resign in protest of Johnson’s uncompromising negotiating strategy, keeping the case for a hard Brexit open.

Is the UK strong enough to fight more Brexit uncertainty?

Given the situation, the UK economy must prove that it has the fundamentals to survive the mounting Brexit uncertainty that has already brought some businesses to their knees. Although July’s unexpected uptick in monthly GDP growth readings dampened fears of a recession, the August figure could revive those concerns if the number softens from 1.0% to 0.9% on a yearly basis and plunges to 0.0% from 0.3% in monthly terms. The three-month average GDP growth is projected to extend the rebound from -0.2% in June to 0.1%. 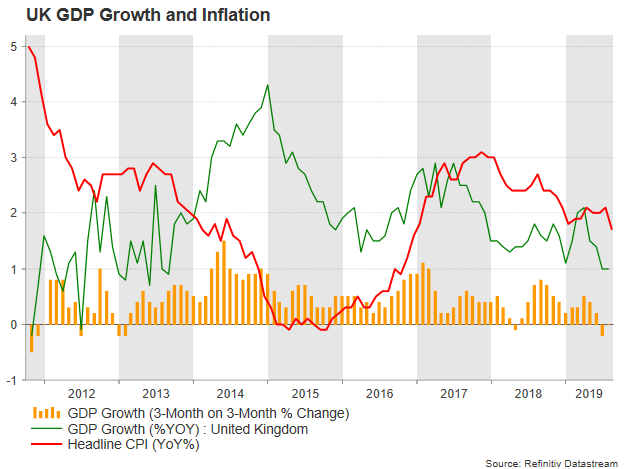 Disappointingly, the UK services PMI index by the IHS Markit survey, dropped under the 50 threshold in September and for the second month in a row, signaling that the growth-leading services sector entered contraction along with the manufacturing industry; a sign that a steeper slowdown or negative GDP growth may be inevitable in the third quarter. The strong pullback in the headline CPI in August that drove the index down by 0.4 percentage points to 1.7% is another worrying signal as consumers seem unwilling to spend, despite the latest growth increase in average hourly earnings. 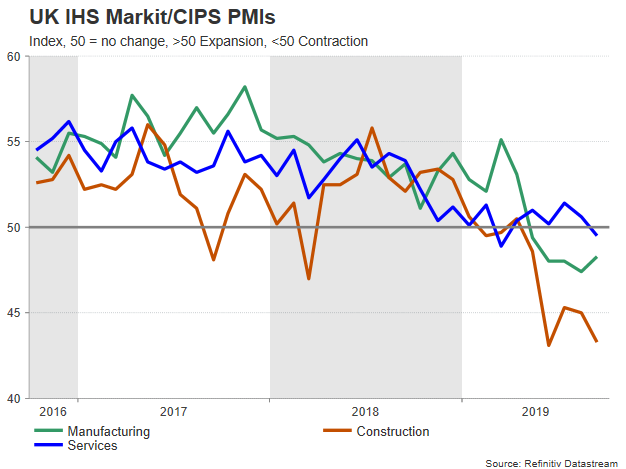 Could Bank of England join the dovish camp?

The Bank of England, which is the only major central bank that has yet to lower interest rates, could intervene to help the economy by cutting its own borrowing costs. The question though is when. Currently, markets are pricing in a small probability of 24% for a rate cut at the next policy meeting on November 9 as confusion of whether Boris will follow the law and delay Brexit or keep his promise and exit the bloc with or without an agreement, makes a wait-and-see approach a better choice.

Nevertheless, patience may hit its limits and policymakers could soon vote for stimulus if the Brexit saga combined with the US-China trade war brings more serious damage to the economy. Therefore, rate expectations could be sensitive to upcoming data including Thursday’s GDP growth figures, shaking the pound too. Particularly if a set of discouraging data is also followed by a harsh exit from the EU.

Hence, policymakers may probably have a clearer picture on the economy and Brexit developments in December than in November, while in January the BoE governor Mark Carney will have his last policy meeting before he leaves the office and a rate cut would not be an appropriate goodbye.

The fundamental and technical frameworks are currently suggesting that downside corrections in the pound are more likely that upside ones, keeping the spotlight on the 1,2200-support level for GBPUSD. A significant miss in GDP growth readings would darken the outlook for the UK economy and undermine its strength to mitigate a potential deterioration in Brexit developments, pushing the pair below that barrier and towards the 1.2160-1.2100 area.

Otherwise, a better-than-expected outcome could see a retest of the 1.2270 handle, while the area around 1.2320 will also be in focus in case of a steeper rally.