UK economic output likely plummeted in November – figures out on Friday are expected to reveal (07:00 GMT) – after the country was plunged in a second lockdown. But things have only gotten worse since then as England has been forced into its third lockdown. However, the grim data will probably be seen as too out-of-date to have a material impact on the pound as traders look beyond the winter shutdowns and towards mass inoculations. With the UK leading the global vaccination effort, the pound is holding firm near its post-Brexit deal highs, while the Bank of England’s hesitance for negative rates is also shoring up the currency.

The second virus wave has hit Europe hard and the region’s major economies are now facing the prospect of a double-dip recession. For the United Kingdom, which had seen its GDP shrink by a fifth from the first lockdown, the new nationwide restrictions can only mean another big dip in output. Britain’s economy is forecast to have contracted by 5.7% month-on-month in November, which would mark the first monthly decline since April. The fall is expected to have been led by a 6.7% m/m drop in services output. However, manufacturing and broader industrial output are forecast to have continued growing over the month, easing some of the blow on the economy. 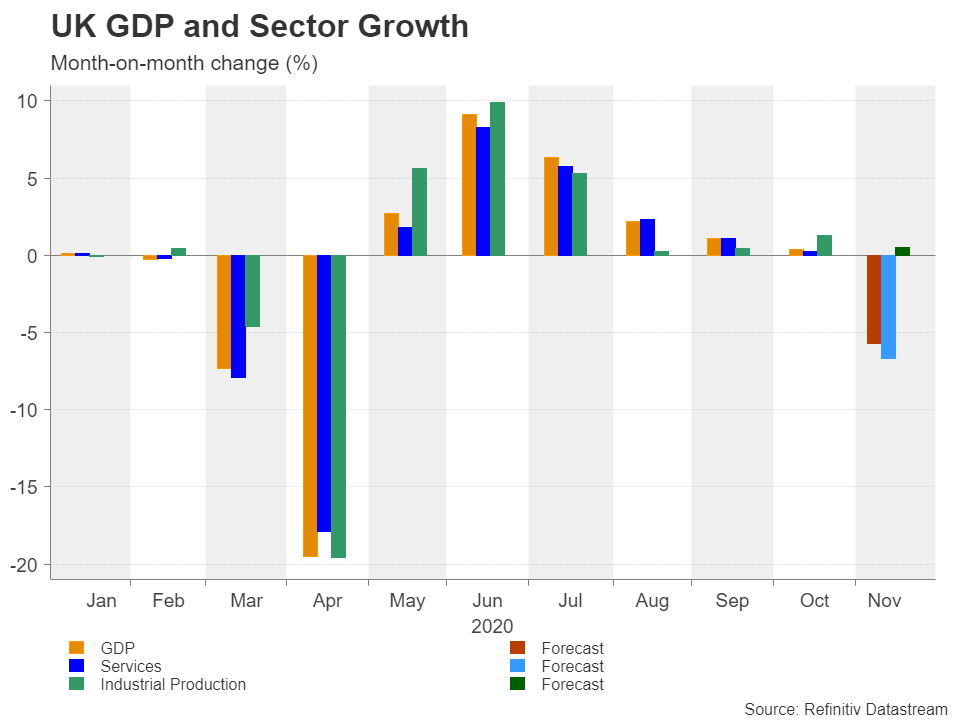 Early indications suggest the latest lockdowns in the UK and Europe are not having as much of a devastating effect on GDP as the first shutdowns in March 2020, so a positive surprise is possible. However, if GDP were to fall by more than expected, it’s unlikely to alter views at the Bank of England as policymakers will want to get a fuller picture of the impact the latest virus measures are having on the economy, and more importantly, whether it will be possible to start easing the restrictions by spring.

UK at the forefront of the race to vaccinate

That of course, will depend on how quickly vaccines are rolled out across the country. Although the UK is currently second only to Israel in terms of the percent of population that have received their first dose of Covid-19 vaccine, the government is taking a gamble by delaying the second dose so as to allow more people to get the first jab. However, this scientifically unproven policy runs the risk of leaving people that have only received their first dose vulnerable to catching the virus. The other danger for the UK is that the new Covid variant discovered there is so rampant, tight restrictions might need to stay in place until hospitalizations have come down very substantially. 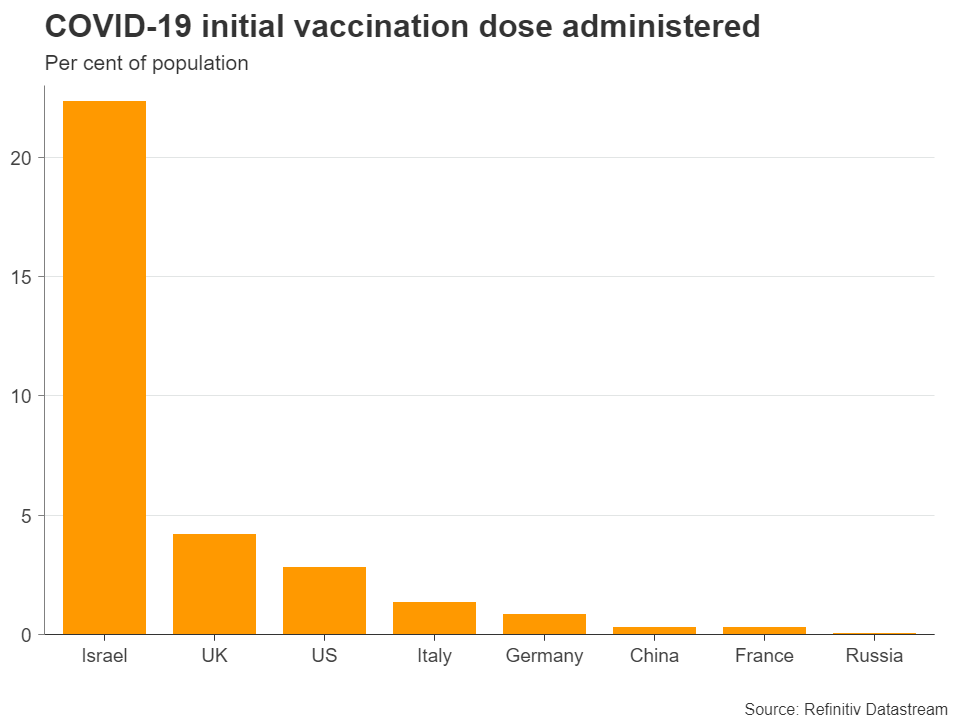 These are all things that the Bank of England will probably be keeping an eye on, though its next meeting on February 4 may be too soon to come to any decision about further stimulus. But one thing is certain – the Bank is still nowhere near to coming to any conclusions about implementing negative interest rates. If anything, expectations for negative rates are receding after Governor Andrew Bailey expressed his concerns this week about the possible side effects on the banking system, saying there were “a lot of issues” with pushing rates below zero.

The uncertainty surrounding negative rates is the biggest variable for the pound now that Brexit is ‘done’ and vaccinations are underway. While it’s more than likely the Bank will ramp up its asset purchases further in the coming months to help the economy recover, both from the pandemic and the teething issues with the new trading arrangements with the EU, it is the question mark about how low interest rates can go that is most keeping pound traders up at night.

Bailey’s renewed scepticism about the benefits of negative rates is bolstering the pound and coupled with the government’s drive to speed up vaccinations, the British currency has an edge over its rivals at the moment even though in the immediate term, the UK economy is in dire straits.

The pound is currently testing resistance at the 123.6% Fibonacci extension of the September 2020 downleg at $1.3673. Clearing this hurdle would pave the way for the 138.2% Fibonacci of $1.3791. However, failure to break this tough resistance could force cable to retreat towards the $1.35 area. But the more critical support to watch is the 50-day moving average just above the $1.34 level, which if breached, would diminish the positive momentum.