Sterling drifted lower after two out of nine MPC members voted for an immediate rate cut on Thursday at the Bank of England’s policy meeting, increasing speculation that the British central bank could finally join the dovish camp. Following Monday’s disappointing GDP report, inflation, employment and retail sales data are expected to shed more light about whether a looser monetary policy is indeed needed. Yet, according to data forecasts, such a scenario may not take shape, at least not in the near term, relaxing downside pressures on the British currency.

Jonathan Haskell and Michael Saunders called for a 25bps rate cut last Thursday at the BoE policy meeting amid fears the job market could soon go downhill as the number of vacancies have been cooling noticeably in recent months driven by the risk-sensitive part-time employment, while citing the overall GDP growth weakness as well, which unexpectedly inched down to 0.9% y/y instead of ticking down to 1.0% as analysts forecast.

On Tuesday at 08:30 GMT, the September jobs report is expected to show a sharper downfall of 90k in employment growth versus the 56k reduction in the previous month, marking the steepest decline in eight years. The unemployment rate, however, is forecast to stay the same at the 44-year low of 3.9%, with average hourly earnings also stabilizing at a decade high of 3.8% y/y. 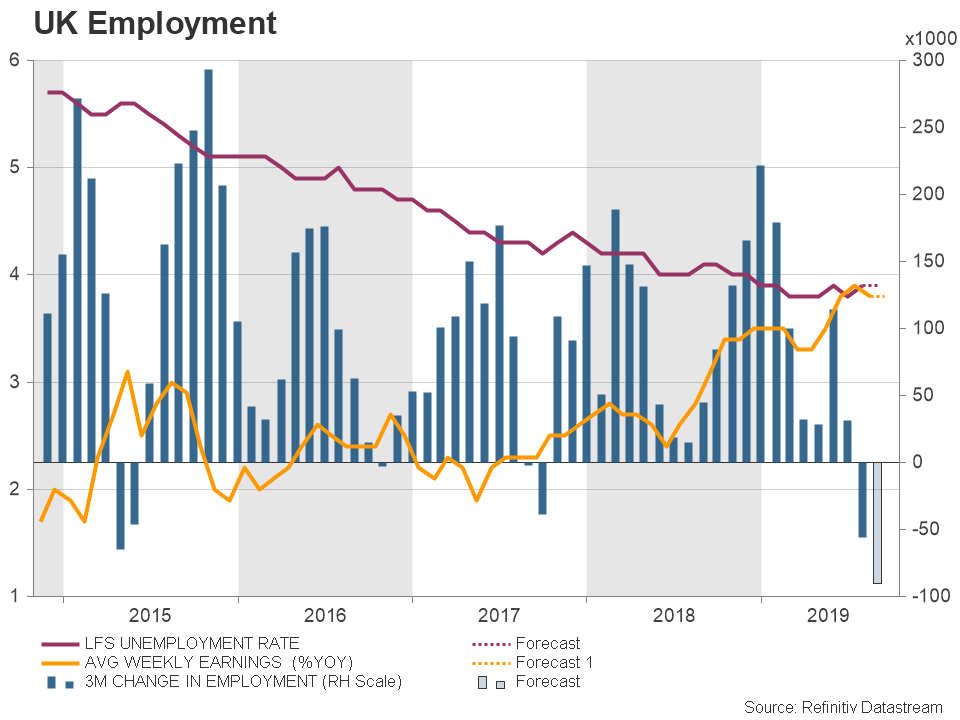 The above suggest that despite manufacturing and construction activities have been narrowing in the face of the Brexit deadlock, the labor market remained relatively resilient, providing some buffer to household spending. October’s retail sales on Wednesday could add more evidence if the figure arrives stronger at 0.2% on a monthly basis after stagnating in the preceding month, raising the annual growth from 3.1% to 3.7%.

In terms of monetary policy now, the data would solely signal that consumers can keep saving the economy from a sharper deterioration, and therefore a rate cut may not be necessary in the near term until further notice. The Consumer Price Index (CPI), which the central bank closely monitors to study inflation, has been below the 2.0% target since July and is expected to ease by 0.1 percentage points to 1.6% y/y in October on Wednesday. 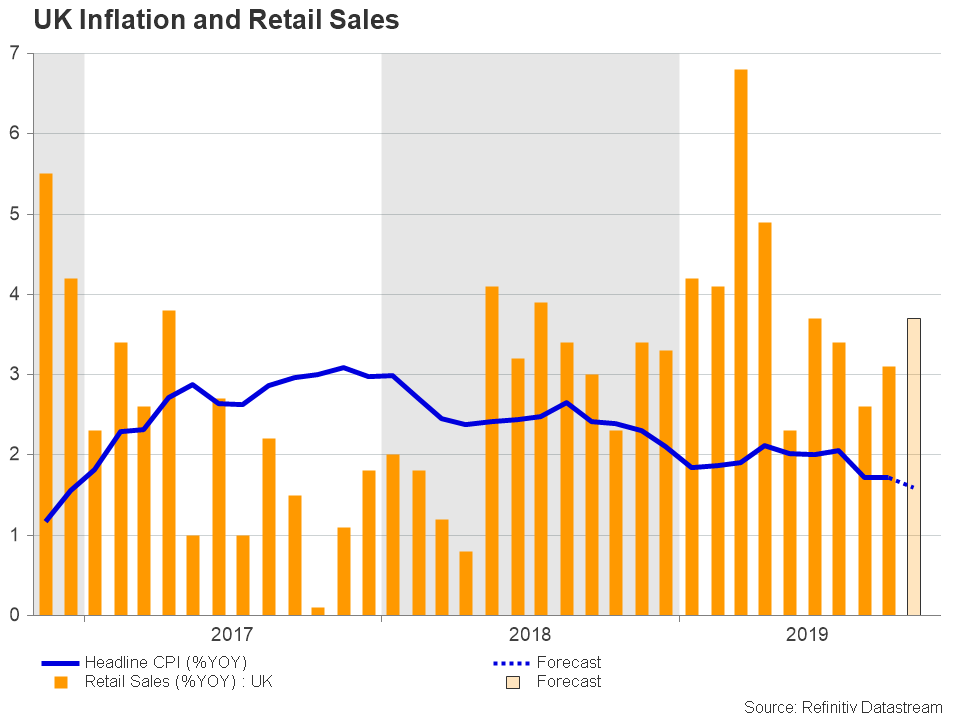 No hurry to change interest rates

Nevertheless, policymakers have already downgraded their 2019 inflation forecasts to 1.4% y/y from 1.6% in August and slashed 2020 estimates from 2.1% y/y to 1.5% under new assumptions that a materialization of President’s Johnson Brexit plan would leave the country worse off in a three-year period than previous projections based on a 15-year timeframe supported. That signals no hurry by policymakers to reduce interest rates in the near-term even though they see more inflationary slowdown ahead. Given the unexpected surprises in the 2015 and 2017 elections, the BoE is anticipated to wisely wait for the December 12 elections to determine whether Boris Johnson will get his Brexit plan done by the January 31 deadline – in case he wins a majority currently around 38% – or whether the country will head to a second referendum under a Labour coalition, or in the worst case we end up with a hung parliament and more Brexit extensions that would definitely be devastating for the British pound.

Pound could be indifferent

As for now the focus will be more on the election polls and less on the data and hence the British pound is anticipated to show a temporary and a less volatile reaction to economic reports this week as investors have priced out the case for a no-deal Brexit too. Nevertheless, a miss in the stats this week could bring some downside pressure to sterling and it would be interesting to see whether EURGBP could break above the 0.8680 strong resistance and enter the 0.8750-0.8800 region, or slip under the 0.8560 support to challenge the 0.8500 level in the event of a positive surprise.