Labour market data will be watched out of the United Kingdom on Tuesday just as Parliament is suspended again only a week after returning from the summer recess. The employment report, due at 08:30 GMT, comes after today’s data pointed to a small bounce in UK growth in July. But while any upbeat data is supportive of the pound, traders will be looking for progress on the political and Brexit front before adjusting their long-term outlook for the currency.

While the protracted Brexit uncertainty has started to leave traces of damage on the British economy, the labour market has remained robust with few signs that the pace of hiring by employers is slowing. That picture likely held true in the three months to July as the unemployment rate is expected to have stayed at a near 44-year low of 3.9%. Employment is forecast to have increased by 43k during the three-month period, easing from 115k in the prior three months. Perhaps more crucially for the economy where consumption accounts for about two-thirds of GDP, wages are expected to have advanced by 3.7% year-on-year, unchanged from the April-June period when it hit an 11-year high. Excluding bonuses, the figure is anticipated slightly higher at 3.8% y/y. 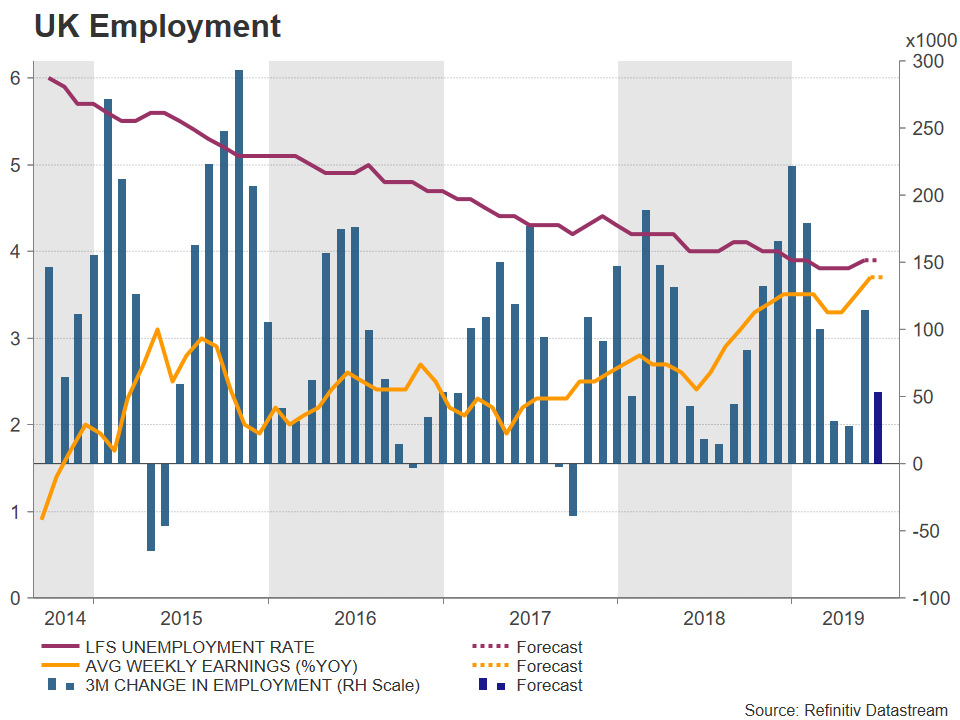 If wages continue to grow at a healthy level, UK shoppers will probably keep on supporting the economy as business investment dries up amidst the darkening cloud of Brexit. However, there are doubts as to how long the broader services sector will remain resilient to the unfolding Brexit crisis. Growth in services has been anaemic so far this year and only picked up markedly in July, suggesting domestic consumption alone may not be enough to keep retailers and other service-sector businesses from shelving their investment plans.

July rebound may be temporary as Brexit turmoil rages on

Data out today showed GDP growth picking up to 0.3% on a monthly basis in July, easing the chances of the economy slipping into a technical recession in the third quarter. However, with the political turmoil in Westminster not looking to be abating anytime soon, the British economy may not be out of the woods just yet.

Prime Minister Boris Johnson is expected to have a second go later today at triggering a general election, but opposition parties are intent on denying Johnson his bid for a snap vote until an extension to the Brexit deadline has been formally requested from the European Union. Labour and other pro-EU parties are distrustful of the government and fear that going to the polls before the application for the extension has been submitted would keep the risk of a no-deal Brexit dangerously high.

Will the government try and sabotage Brexit extension?

The legislation that forces the government to ask for another delay will have completed its passage through Parliament today, leaving Johnson with little option but to abide by the law despite his threats of refusing to do so. The most likely outcome, which is reportedly being considered by ministers, is that the government will make a formal request to postpone Brexit on behalf of Parliament but will also send a second letter outlining the government’s own position, which is that it does not support another extension.

Such a manoeuvre could potentially sabotage efforts to obtain an extension as EU member states may not see the point of having yet another delay if there is no consensus in Britain on a way forward. France has already expressed misgivings about granting another extension, indicating that it is not guaranteed even if a request is made.

However, a meeting between Johnson and his Irish counterpart on Monday raised hopes that a solution to the backstop issue – the main sticking point of Theresa May’s Withdrawal agreement – is still within reach. Johnson is under pressure from all sides to prove that he is committed to seeking alternative arrangements for the Irish border after being strongly criticised by a resigning minister for spending most of the government’s time in preparing for a disorderly Brexit than in engaging with negotiations with the EU.

But the positive joint press conference between the UK and Irish premiers was enough to convince many traders that a no-deal is off the table, at least on October 31. The pound soared after Johnson told reporters that a no-deal Brexit would be “a failure of statecraft”, having earlier rebounded from an opening dip with the help of strong GDP numbers after a difficult few days for the British prime minister.

Should the employment figures also beat expectations and signs of progress emerge in the discussions for the backstop, sterling could stretch its gains to the $1.25 handle – the 38.2% Fibonacci retracement of the March-September downleg. However, should the political temperature at Westminster start to reach fever point again, the pound is likely to reverse back towards its three-year low of $1.1957 plumbed earlier in September.

But after a turbulent week, things will probably quieten down a bit in the next few weeks as Parliament is expected to be prorogued tonight before being reopened on October 14. With Labour trailing behind the Conservatives in the polls and therefore unwilling to take the risk of holding a general election before the October 31 deadline, it will be up to Johnson to try and negotiate a better deal at the October 17-18 EU summit.

Of course, it’s always possible Labour could take a gamble and call a vote of no-confidence with the aim of forming a caretaker government, or the EU might decline the UK’s request for an extension, forcing a chaotic exit. Whatever awaits in October, the pound is in for a rough ride.