The preliminary PMI report for March is due to be released in the United Kingdom on Tuesday at 09:30 GMT and February numbers for inflation and retail sales will follow on Wednesday and Thursday, respectively, at the same time. With data for February now considered inconsequential given the unfolding situation with the coronavirus crisis, all the attention will be on the March business surveys as they will be the first indicators to shed some light on the extent of the hit to the economy from the outbreak.

UK growth failed to rebound substantially at the start of the year, despite hopes of a ‘Boris bounce’. This means that going into the crisis, the British economy was not on a strong footing to begin with and therefore business and consumer confidence were likely less immune to external shocks. However, although economic activity has undoubtedly been badly affected by the global pandemic, the UK government did not adopt tough measures to combat the spread of the virus until recently, and even now, the restrictions in place are not as extreme as those followed by many other European countries, such as France and Italy.

Hence, the March PMIs by IHS Markit are expected to paint the UK in a relatively more upbeat light. The manufacturing PMI is anticipated to decline from 51.7 to 45.0 in the flash reading, while the services PMI is also forecast to drop to 45.0, from 53.2 previously. In contrast, the Eurozone PMIs are projected to tumble below 40.0. 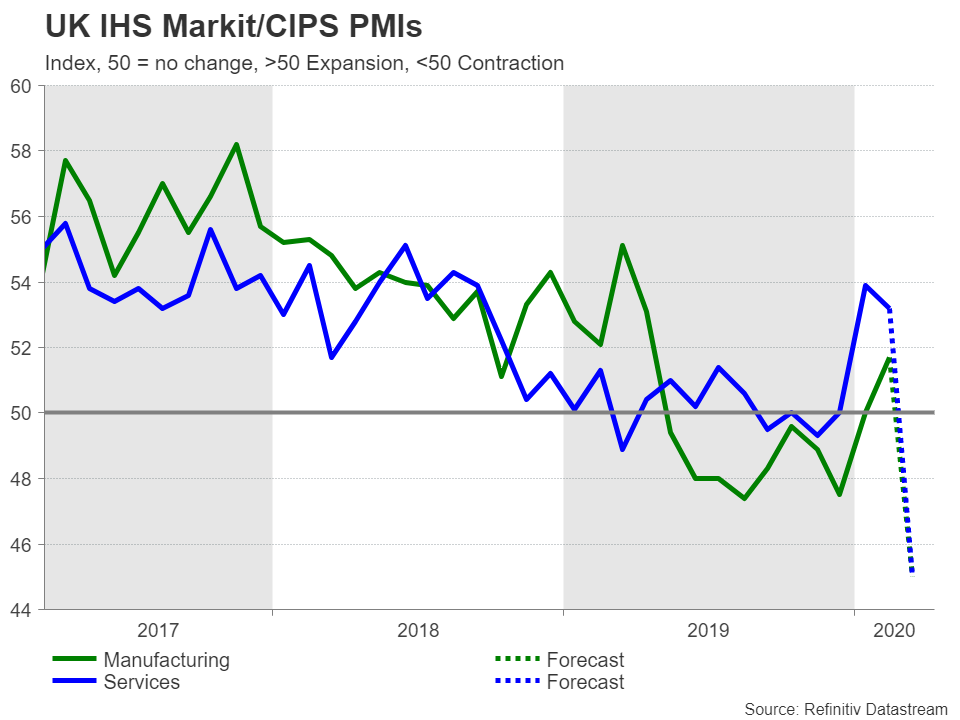 Nevertheless, the pound is unlikely to get much of a lift, if any, from the data if they fall more or less in line with expectations. Apart from the fact that the virus turmoil appears to be getting worse by the day and it’s too soon to predict an end to the crisis, investors are worried about the Johnson government’s response to halting the spread of the disease and fear the number of infections in the UK may peak much later than the rest of Europe.

Those fears appear to be weighing on the pound, which has plunged against both the US dollar and the euro over the past couple of weeks. If the flash PMIs disappoint, sterling’s descent could accelerate, risking the breach of major supports at the 138.2% and 161.8% Fibonacci extensions of the September-December 2019 uptrend, at $1.1362 and $1.0995, respectively.

But there may be some love for the pound later in the week if Thursday’s retail sales figures provide rare good news. UK retail sales are forecast to have increased by 0.2% month-on-month in February. A beat in the data won’t make any difference to the economic outlook but may assist an upside correction in the pound, which is due, according to technical indicators.

A rebound could see cable recovering towards important resistance in the $1.1710 region.

Bank of England to hold third meeting this month

Another key event on Thursday is the Bank of England policy meeting. The BoE has already had two emergency meetings in March, cutting rates twice and restarting its quantitative easing program to help calm markets. Further measures cannot not be ruled out at this week’s regular meeting, especially if the market panic does not subside, though any additional action probably won’t be on the same scale as those already announced.