Having only just come out of lockdown number two, much of the United Kingdom finds itself shut down again as the recently discovered new variant of Covid-19 is spreading even faster than previously known strains. This new highly contagious version of the virus left the government no choice but to impose the toughest measures since the first lockdown at the beginning of January. Hence, it will come as no surprise that the flash PMIs for the month – due on Friday (0930 GMT) – are expected to be pretty dire. Yet, the prospect that the latest shutdowns could stretch into March has barely left a dent in the pound as investors are impressed by Britain’s efforts to turbocharge the vaccination process.

Heading for a double dip?

Better-than-expected GDP numbers for November last week raised hopes that the UK economy avoided contraction in the fourth quarter and maybe even eked out slight growth. However, following the harsher lockdown of January, the risk of a double-dip recession has not totally dissipated and Friday’s PMI data will likely reinforce that threat.

The services PMI is forecast to have fallen to 45.0 in January’s preliminary reading, staying below the 50 level that separates contraction from expansion for the third straight month. The manufacturing PMI is also forecast to have declined, but only to 54.0, which is still a strong figure, as the sector has largely remained open during the latest round of restrictions in the UK and globally.

However, the greater importance of the services sector is expected to have dragged the composite PMI back below 50, to 45.5, after recovering to 50.4 in December. Retail sales data for December that are due prior to the PMI release will probably confirm a modest pre-Christmas bounce. But the real focus is on Q1 and the predicted drop in overall economic activity in January will likely be just the start as Prime Minister Boris Johnson has signalled it may not be possible to relax any of the restrictions until the beginning of March at the earliest. 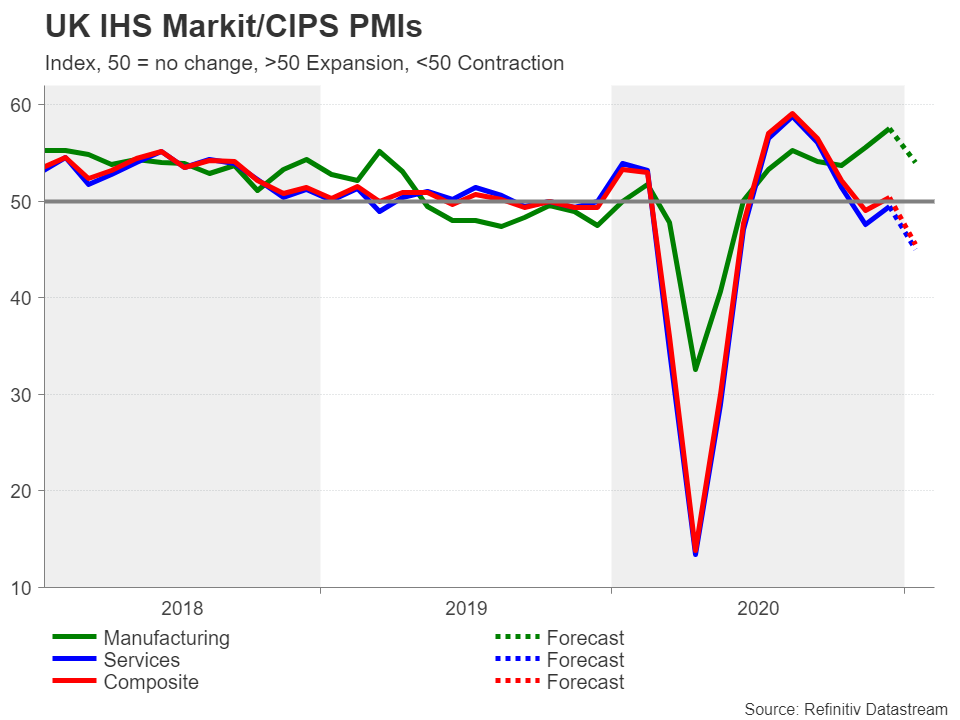 UK ahead in the vaccination race

Nevertheless, investors appear unfazed from the likelihood of a prolonged severe lockdown and the pound has just scaled a new post-Brexit deal high against the US dollar and an 8-month peak versus the euro. Optimism that Johnson’s ambitious vaccination targets will enable Britain to reopen its economy far sooner than other countries is what’s shoring up the pound at the moment.

The UK has immunized more than 4 million people, putting it ahead of the United States and other European countries in terms of the percent of the population that has received a Covid vaccine. Johnson is aiming to have all UK adults inoculated for the first dose by September and the government is pushing hard to open several mega-vaccination centres around the country. 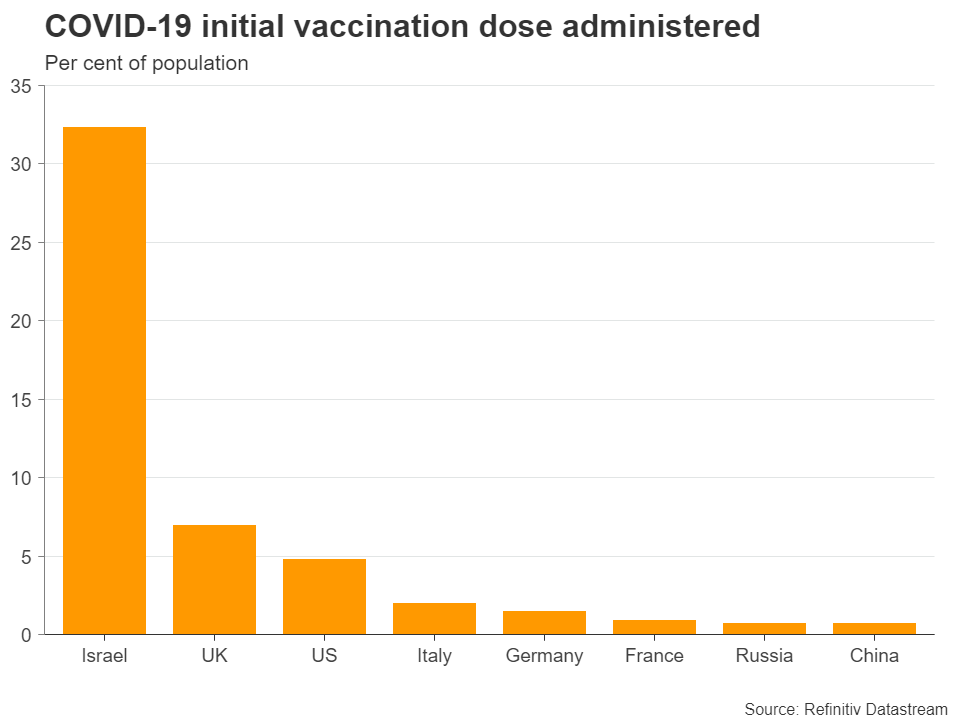 Coupled with a weaker dollar, cable is currently having another pop at the $1.37 level. If the greenback remains under selling pressure from the expectations of more fiscal stimulus in the US and there are no unexpected hiccups in the UK’s vaccination programme, a convincing break above $1.37 is possible in the near term. Above that handle, the next key levels that could be targetted are the 138.2% Fibonacci extension of the September downleg at $1.3791, followed by the 161.8% Fibonacci of $1.3983.

However, if the dollar makes another attempt at a rebound or the UK’s virus fallout gets even worse before things start to improve, cable could initially tumble towards the $1.35 area before testing its 50-day moving average around $1.3450.

But even if the vaccine rollout were to go smoothly, there is a risk investors are underestimating the full damage inflicted on the economy from the lockdowns, not to mention the soaring national debt from the government’s generous furlough and other support schemes.

With the UK now out of the EU and the new trading arrangements with its biggest trading partner proving more costly and problematic for businesses than anticipated, the economy is more exposed than ever to global risks and getting everyone vaccinated may only be part of the solution to getting the country back on its feet.