Preliminary PMI numbers for June will be watched out of the United Kingdom on Tuesday at 08:30 GMT. As the UK economy slowly emerges from the virus shutdown, the PMI gauges are anticipated to reflect the reopening of some businesses. But as Prime Minister Boris Johnson prepares to announce the latest phase of the lockdown easing, there are other things troubling the pound. A worsening stand-off between British and EU negotiators in the Brexit talks has derailed cable’s rebound, even as the two sides agree to intensify efforts for a deal.

After a record plunge in economic output in April and an encouraging pickup in May, Britain’s recovery is expected to have gathered further pace in June. Non-essential stores were given the green light to reopen on June 15, providing a lifeline to struggling retailers. Whether consumers returned to the high street in their droves remains to be seen. But at the very least, the lifting of a major lockdown restriction should help the services sector – by far the biggest component of the UK economy – to bounce back from historic lows.

Analysts are forecasting the services PMI to jump from 29.0 to 40.0 in June in IHS Markit’s flash report. The manufacturing PMI is also expected to extend its revival, rising from 40.7 to 45.0. The composite PMI, which measures business activity in the broader economy, is projected to climb from 30.0 in May to 41.0 in June. But as impressive as those increases would be if confirmed, they would still point to negative growth as a figure below 50 is interpreted as shrinking economic activity. 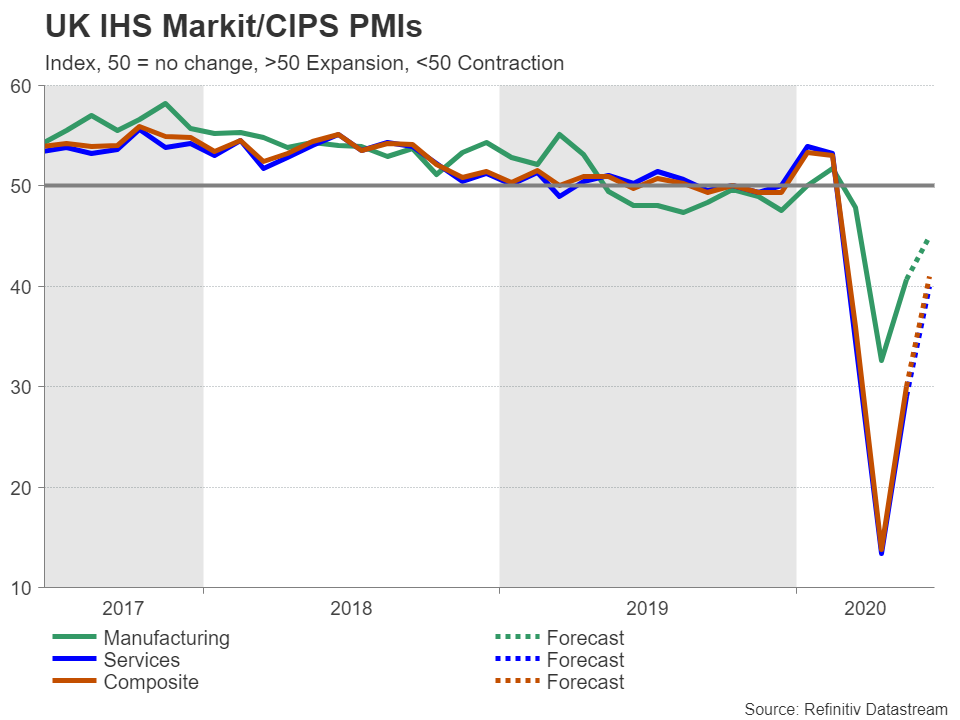 This only goes to highlight the challenge facing policymakers as, despite the solid rebound that is undoubtedly underway, the recovery mountain that needs to be climbed from the depths plummeted is a very steep one. The UK government, while slow to respond to the health threat, has been quick to respond fiscally to the COVID-19 pandemic. The Bank of England has also been proactive in shoring up the economy, though it left some investors disappointed when it didn’t boost its bond purchases by more than the expected £100 billion last week.

As policymakers keep an eye on the incoming data to evaluate how much additional fiscal and monetary relief will be required in the coming months, the stimulus story may only be a secondary concern for pound traders. With just over six months to go before the Brexit transition period comes to an end, there’s been little progress in the negotiations between Britain and the European Union on a future trade deal. Although Johnson and his EU counterparts added some much-needed impetus to the Brexit talks last week, eyeing autumn as a likely timeline for reaching a deal, the two sides remain far apart on key issues.

Pound on the backfoot

The worryingly slow progress has been a clear drag on sterling over the past week, though its moves also track the overall risk tone in the broader markets. Should the absence of positive Brexit headlines continue to haunt the currency, it will be in danger of soon slipping below the $1.23 level, which is the halfway point of the March downtrend. A breach of that critical support could open the way for the 38.2% Fibonacci of $1.2090.

However, if Brexit fears begin to subside and the outlook for UK and global growth brightens further, the pound should be well placed to reclaim the 61.8% Fibonacci at $1.2513. A successful break above this resistance area would then shift the focus onto the 200-day moving average at $1.2690, followed by the June top of $1.2812.