The first estimate of UK GDP for Q3 will hit the markets on Friday, at 0830 GMT. Forecasts point to an acceleration in growth, which may help sterling to extend its latest gains. That said, economic data in general are likely to play second fiddle to any developments in the Brexit negotiations, with politics likely to overshadow economics in driving the pound over the coming weeks.

The UK economy is anticipated to have grown by 0.6% on a quarterly basis in Q3, a notably faster pace than the 0.4% recorded in Q2. Such a quarterly print would drive the yearly expansion rate higher to 1.5%, from 1.2% in the previous quarter. Besides the headline GDP number, this release will also feature the preliminary data on business investment for the relevant quarter, which are likely to act as a gauge of whether Brexit uncertainties are causing firms to curtail their investment plans. Investment is forecast to have risen by 0.2% in quarterly terms, a rebound following a decline of 0.7% previously. 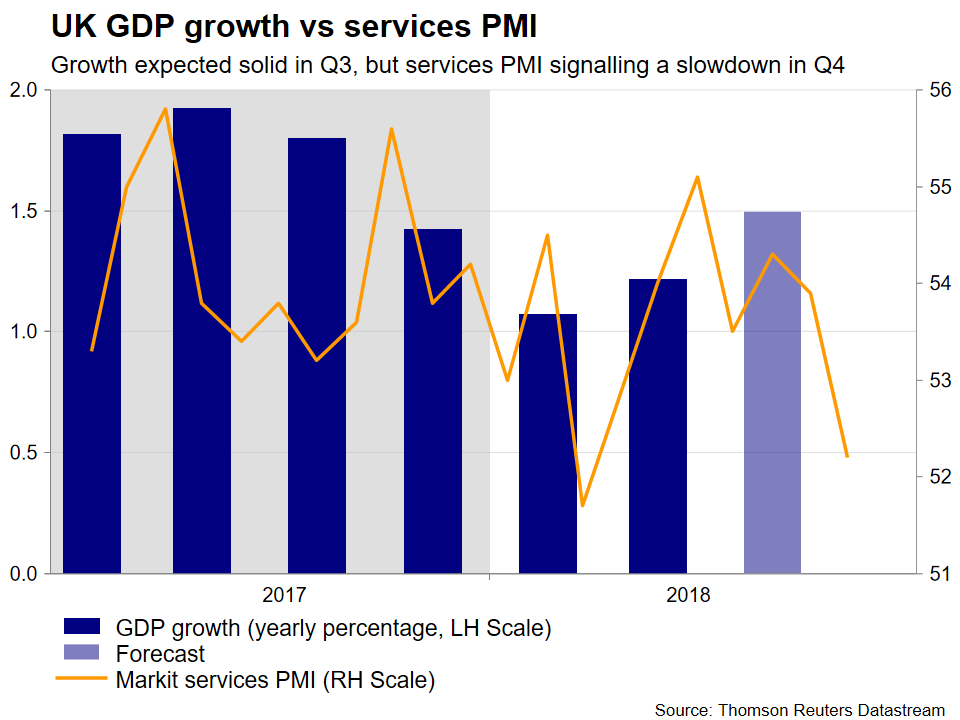 A GDP print of 0.6% in Q3 would be in line with the Bank of England’s (BoE) latest growth forecasts and hence, while it may support the pound a little on the news it is unlikely to significantly spur bets for faster rate increases by the Bank moving forward. Looking at market pricing derived from UK overnight index swaps, investors don’t expect policymakers to raise rates again until September 2019 – a pricing so pessimistic relative to the state of the UK economy that it likely incorporates concerns around Brexit as well. In other words, markets are betting the BoE will stay sidelined until the Brexit fog clears somewhat, which implies political developments could continue to eclipse economic ones in driving sterling over the coming weeks.

Turning to the latest on Brexit, optimism is currently riding high that a deal may be clinched before long, following reports that the UK government is working on a compromise proposal that could be presented to the EU later this month. Accordingly, the British pound has been riding this wave of newfound confidence, posting considerable gains lately as investors unwound some of their prior short-bets on the currency.

While an agreement indeed appears to be inching closer, the reality is that any deal will also need to be approved by the UK Parliament, which may be much trickier than it seems at first glance. Thus, lots of twists and turns likely remain before the Brexit saga concludes, implying that even if the pound ends the year higher from here, it will likely be a volatile and bumpy trip, and not all smooth sailing.

Technically, further advances in sterling/dollar could encounter initial resistance near 1.3175, the peak of November 7. An upside break could open the way for the 1.3235 area, defined by the October 16 highs, with even steeper bullish extensions potentially aiming for 1.3300, the September 20 top.

On the other hand, a pullback in the pair may meet a first wave of support around 1.3060, a zone marked by the inside swing high on November 4. If the bears pierce below it, then buy orders may be found near the November 5 lows at 1.2960, before the 1.2850 area attracts attention – this being the inside swing high of October 29.