As the UK debates whether to open the fiscal taps, economic data is likely to return to the headlines on Thursday and Friday, with investors hoping to see more signs of a turnaround from the latest retail sales and flash PMI numbers. Retail sales figures for January are due on Thursday at 09:30 GMT, while the preliminary PMIs for February will be released on Friday, also at 09:30 GMT. Talk of a fiscal stimulus, as well as comparatively better data has been supporting the pound even as the government steps up its hardline rhetoric on future trade with the EU.

Consumer spending has been sluggish

After stagnating in the December quarter, early indications are that Britain’s economy rebounded notably at the beginning of 2020, though one important piece of data that hasn’t been published yet for January is the retail sales report. UK shoppers turned frugal last year as the Brexit and political uncertainty reached new heights, hitting consumer and business morale. In an economy where spend-happy consumers have in the past tended to cushion the impact from external headwinds, this time round, the blow to confidence from domestic concerns was too strong to fend off. And with private consumption being a key engine of UK growth, a recovery in retail sales is crucial to reinforce the post-election upturn.

Retail sales are forecast to have increased by 0.7% month-on-month in January, which would mark the first monthly growth since July 2019 and more than offset December’s shock 0.6% decline. Excluding fuel, sales are expected to have rebounded by 0.8% m/m. On an annual basis, however, forecasts are for retail sales to slow to 0.7%, underlining the fact that it will take more than one month of strong consumption to return the sector to health. 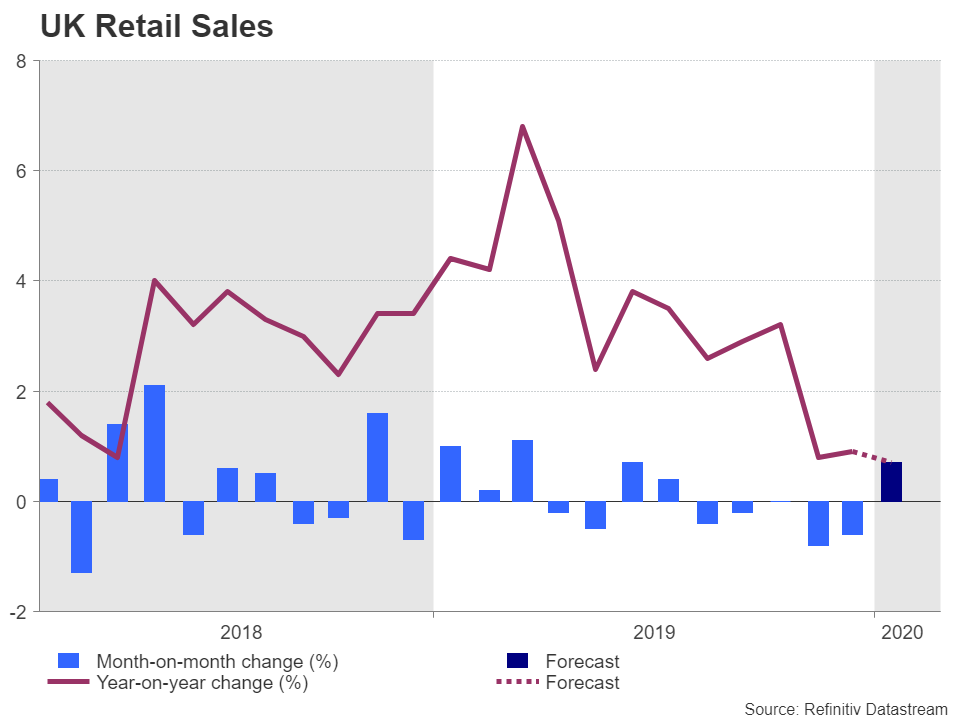 Equally important will be Friday’s flash PMI releases. The January numbers pointed to a broad upswing in economic activity as political stability was restored after the December election and some of the uncertainty deriving from Brexit was removed. But just as things started to quieten down on the Brexit front, the economy is facing new pressures from the coronavirus epidemic and persistent weakness in the Eurozone – the UK’s largest trading partner.

Hence, economists are predicting a mild pullback in the PMIs in February’s preliminary readings. The manufacturing PMI is forecast to drop to 49.7 from 50.0, while the services PMI is projected to edge down to 53.4 from 53.9. 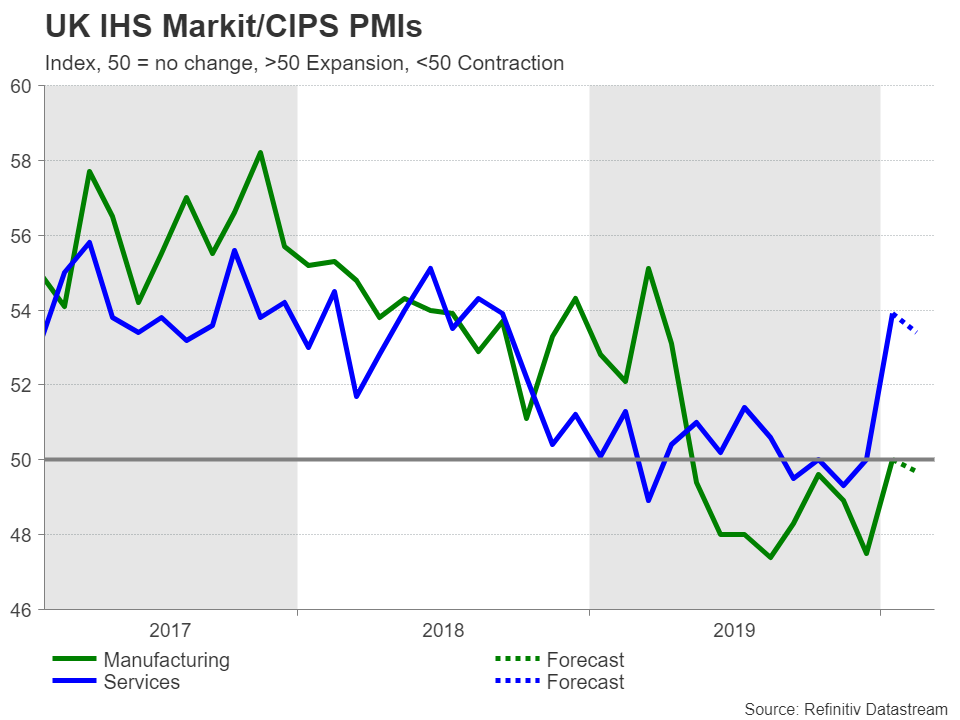 Traders might stay on the sidelines until March Budget

Worse-than-expected numbers are likely to generate fresh selling pressure for cable, increasing the risk of the 2020 low of $1.2870 being revisited. A break below this trough would turn attention to the 50% Fibonacci retracement of the September-December rally at $1.2736.

However, if the data points to resilience in the UK economy, buyers might be able to clear the immediate resistance of the 50-day moving average, currently at $1.3064, paving the way for the 23.6% Fibonacci at $1.3147.

Looking beyond this week’s releases, investors will probably want to wait for the UK government’s budget statement, scheduled for March 11, before significantly adjusting their positions in the British currency. Markets are eager to find out whether Boris Johnson’s administration will keep to its pledges of big infrastructure projects and increased spending on public services, which if confirmed, would be seen as positive for sterling.