Britain’s services PMI for September is due on Thursday at 08:30 GMT. Forecasts point to a decline in the index, which could raise the odds for a Bank of England (BoE) rate cut in the near term. Of course, politics will overshadow economics in driving the pound, so more attention may fall on Boris Johnson’s Brexit proposals. If what has been released so far is accurate, the EU is unlikely to agree to them, which implies more pain ahead for the pound – at least until a General Election is called.

The British economy continues to lose steam, with GDP growth contracting in Q2 as the persistent threat of a no-deal Brexit continues to keep businesses cautious, fostering a relentless decline in investment that is starting to bring the broader economy to its knees. The latest services PMI is expected to confirm this worrisome trend, with the index forecast to slip to 50.3 from 50.6 previously, coming dangerously close to the 50 level that indicates stagnation.

Since services account for roughly 80% of the British economy, such a decline could incentivize more BoE policymakers to join the camp calling for rate cuts, and consequently bring the pound under renewed selling interest. That said, politics are far more important for the pound than economics nowadays, so perhaps the bigger determinant for the currency’s overall direction will be how the EU responds to Prime Minister Johnson’s latest Brexit proposals. 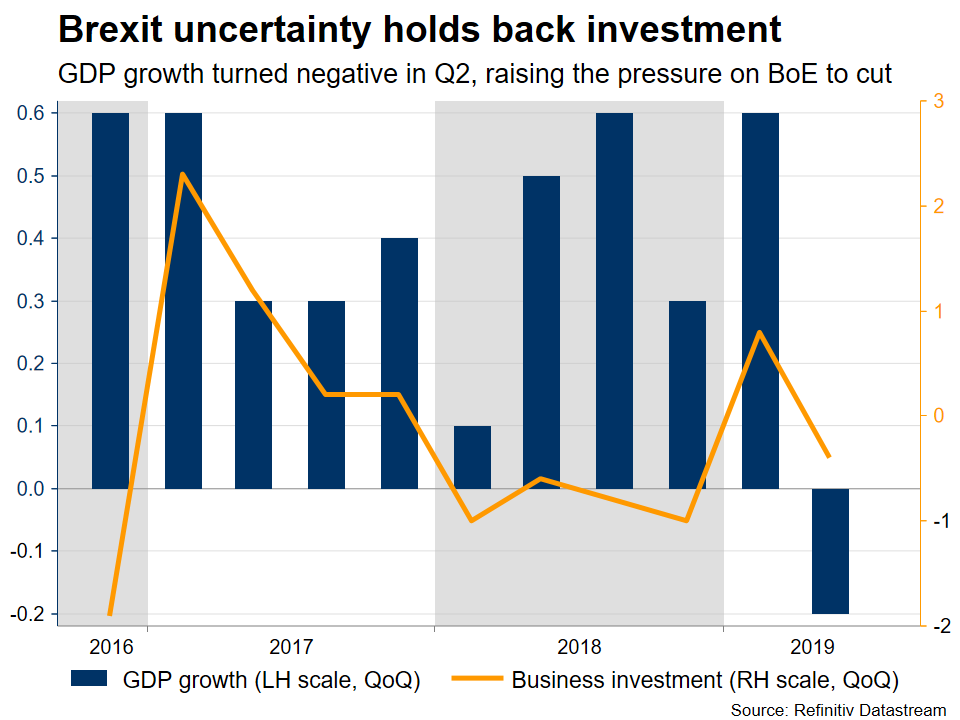 His plan has already been leaked and suggests that the UK will leave both the customs union and single market by 2021, but that Northern Ireland would stay in the single market for another four years. That would erect a customs border between Northern Ireland (UK) and the Republic of Ireland (EU), which was exactly what the controversial backstop solution was intended to prevent in the first place. However, the British plan states very clearly that no physical checks will be conducted at the border, but rather at ‘designated locations’ that could be miles away.

Alas, if these leaks are accurate, it is difficult to see the EU agreeing to it. This kind of a ‘decentralized’ border check solution was already proposed by Johnson’s predecessor, Theresa May, and the EU rejected it outright. Indeed, the Irish government has already voiced its opposition to several parts of this plan, which implies that it may not even form the starting point for real negotiations.

For the pound, this spells more trouble. If EU leaders see Britain’s ideas as falling well short of their own vision and refuse to negotiate on them, that would make an agreement even less likely, increasing the risk of a chaotic exit down the road. Hence, the outlook for the pound seems bleak, and further losses in the coming weeks shouldn’t be ruled out as hopes for a deal fade.

What could turn the tide? Admittedly, one of the few sterling-friendly outcomes left on the horizon may be a General Election. When one is called, that could see the markets price in the prospect of a remain-friendly coalition government – comprised of Labour, Lib Dems, and SNP for example – which may trigger a relief rally. Until then though, there’s probably not much to celebrate.

Technically, further losses in sterling/dollar could be halted near 1.2205, where a downside break may open the door for a test of the 1.2030 zone.

If the bulls retake control, their first obstacle would be the 1.2410 area, defined by the inside swings low in mid-September. A violation of that region would turn the focus to 1.2580.