Australia will publish its CPI inflation readings for the September quarter on Wednesday at 00:30 GMT in what could develop into a volatile session for the aussie as the gap between RBA policymakers and investors over the interest rate outlook gets wider. Expectations are for the core CPI to have marched higher, with the aussie likely gaining fresh buying traction if the data overshoots forecasts.New Zealand's inflation spike shifts attention to Australia

In the second quarter, surging prices in the transport group followed by spikes in the health care and household equipment costs led the headline CPI inflation index to a 13-year high of 3.8% y/y as expected in Australia.

The core trimmed and weighed CPI measures, which exclude items that show extreme volatility, also crawled up to 1.6%y/y and 1.7% respectively, but the data remained below the midpoint of the RBA’s 2-3% range target, with the central bank attributing the pickup to temporary factors and reiterating that inflation will return to 2.0% in the medium term as its European and US peers stubbornly keep supporting.

Perhaps base effects from 2020 low levels and one-off factors such as a free childcare package provided extra fuel to price growth despite the extended lockdowns during the aforementioned period. Since then, however, a bulk of countries have registered higher inflation figures above 4.0% in the face of fuel shortages, making investors wonder whether Australian price figures could face another extraordinary jump.

Particularly, concerns mounted after New Zealand posted a whopping 4.9% y/y CPI increase in the third quarter from 3.3% previously on the back of hotter housing and gasoline prices. The Australian and New Zealand economies share similar market conditions, therefore an upside surprise in the Australian CPI figures cannot be ruled out either, especially as home building subsidies diminish.

Currently, investors project a softer headline CPI of 3.1% y/y in the third quarter but a stronger set of core CPI data, placing their estimates for the trimmed CPI at 1.8% y/y and the weighted CPI at 1.9% y/y. 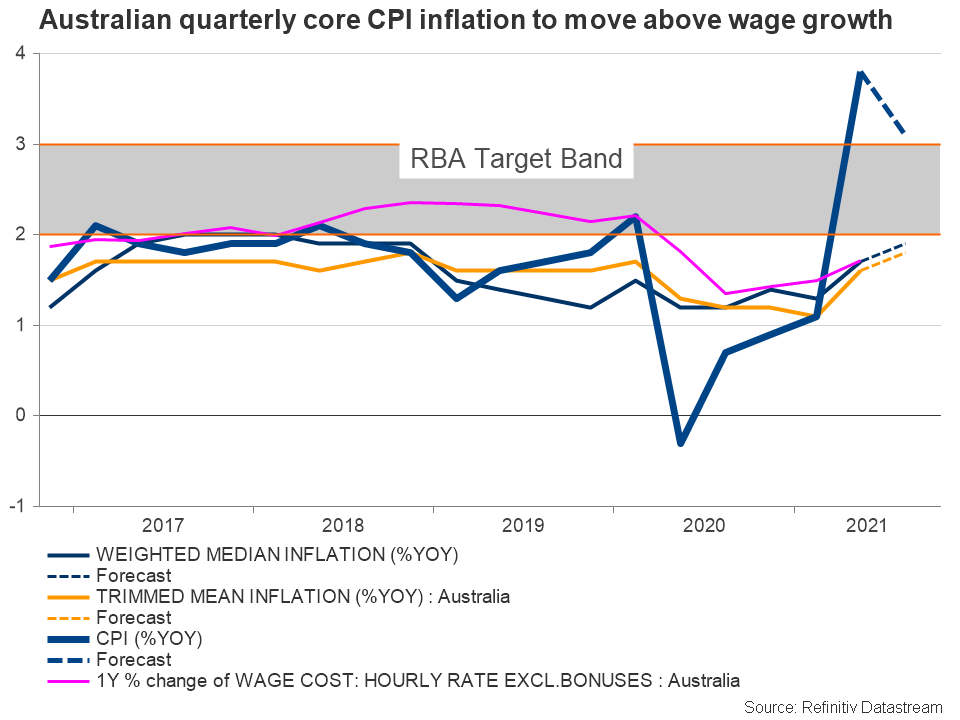 What the RBA believes?

Turning to monetary policy though, unlike the RBNZ, which has already hiked its interest rates by a quarter of a percentage point to 0.5% this month, the RBA believes that the economy will not meet the conditions for a rate rise before 2024.

Of course, the minutes from the October policy meeting acknowledged that inflation could build more quickly than policymakers initially anticipated, though the central bank has recently underlined that it would like to see a more durable expansion above its mid-point target for some quarters, and more importantly achieve full employment conditions, in a situation in which the unemployment rate drops below 4.0% and wage growth accelerates above 3.0% according to the RBA governor Philip Lowe.

What markets are pricing in?

On the other hand, indexed swap rates are showing investors growing confident that the RBA will run out of patience earlier, expecting a rate hike to come as soon as November 2022. That scenario could get more backing if core CPI inflation readings beat estimates and climb notably above the RBA’s 2021 projection of 1.75% ahead of the next monetary policy statement due on November 5. New price and growth forecasts will also accompany the policy decision.

If the above scenario materializes, aussie/dollar could set another battle near the 200-day simple moving average (SMA) at 0.7557, before heading for June’s resistance of 0.7612.

Otherwise, a miss in the data could press the pair towards the nearby support area of 0.7455. A break below that floor would open the door for the 0.7400 handle, while not far below, the 20-day SMA will be the next target if selling pressures strengthen.