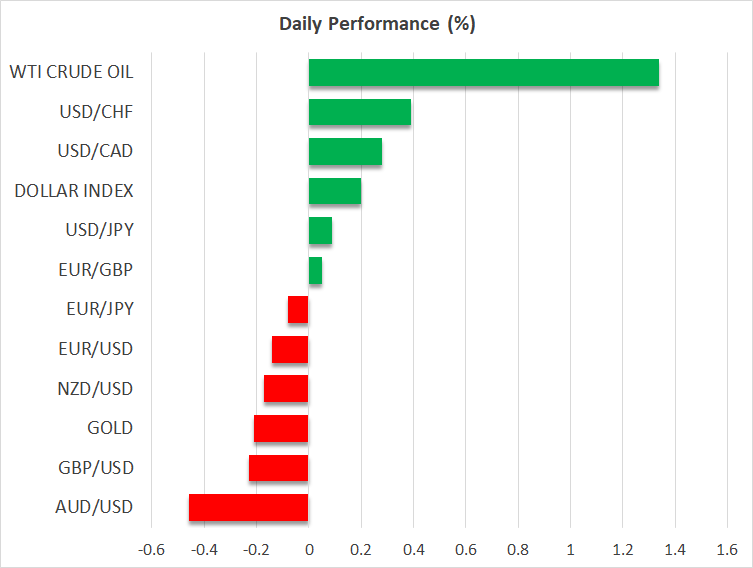 Economic growth in the world’s second largest economy slowed more than expected in the third quarter as China reported that GDP rose by 4.9% from a year ago, missing forecasts of 5.2%. Power cuts and pressures in the property sector dragged down growth, especially towards the end of the quarter. Industrial output was up just 3.1% year-on-year in September while fixed asset investment slowed for the seventh straight month.

The fallout from the Evergrande debt crisis will likely reverberate through the current quarter as authorities step up efforts to reduce leverage among heavily indebted real estate companies. The energy shortages inflicting businesses won’t be resolved anytime soon either, though the government might deprioritise climate goals so as to ease the rationing.

The immediate focus for investors, however, is how soon will policymakers loosen monetary policy again amid some tempering in expectations that China’s central bank – the PBOC – is planning an imminent cut in the reserve requirement ratio (RRR).

China’s blue-chip CSI 300 index closed more than 1% down on the day, pulling most of Asia down with it. The S&P/ASX 200 index in Sydney was the exception as shares were buoyed by more news of easing coronavirus restrictions in Australia. However, European stocks opened in negative territory as US stock futures headed lower.

Wall Street’s earnings-driven rebound is looking a bit shaky on Monday as markets are being reminded about the mounting headwinds that somehow got put aside last week. The rally in crude oil is showing no sign of abating, with WTI futures scaling fresh seven-year highs today, though natural gas prices remained well off their recent peaks. The surge in energy prices is adding to the cost burden for businesses, which are also battling to untangle supply-chain bottlenecks and fill vacancies amid widespread worker shortages.

But it’s not all doom and gloom as equity markets had plenty to cheer about last week. The Q3 earnings season got off to a blistering start. A solid set of results from Wall Street’s major banks transformed the S&P 500’s three-day slide into a three-day rally, taking the benchmark index within 1.5% from its all-time high.

The earnings season continues in earnest this week, with Netflix’s results tomorrow being one of the highlights.

Another boost for the markets last week was Friday’s much stronger-than-expected retail sales report out of the United States, which soothed fears of a sharp slowdown in growth. However, the upbeat data also made investors more confident that the Federal Reserve will be able to hike rates sooner rather than later, pushing the two-year yield on US Treasuries to 19-month highs.

Higher Treasury yields combined with China’s weak GDP numbers are spurring demand for the US dollar and other safe haven currencies on Monday, with even the battered yen making some advances. The dollar index is up about 0.2% as the greenback’s gains versus the yen and euro cool off slightly but riskier currencies like the pound slip. The Australian and New Zealand dollars are also under pressure today even as their respective yields rise on the back of rate hike expectations.

Inflation soars in New Zealand; will UK be next?

New Zealand’s consumer price index jumped by 2.2% during the third quarter, taking the annual rate to a 10-year high of 4.9%. The Reserve Bank of New Zealand is now almost certain to raise the cash rate again at the next meeting in November and could signal an even faster normalization timeline than it previously messaged.

Odds that the Bank of England will lift rates soon are also going up after Governor Andrew Bailey on Sunday once again strongly hinted that policymakers “will have to act” if medium-term inflation expectations start rising. Inflation figures for September are due out of the UK on Wednesday and could fuel rate hike bets if they beat expectations.

For the moment, though, worries about the growth and inflation outlook are giving the upper hand to the dollar.