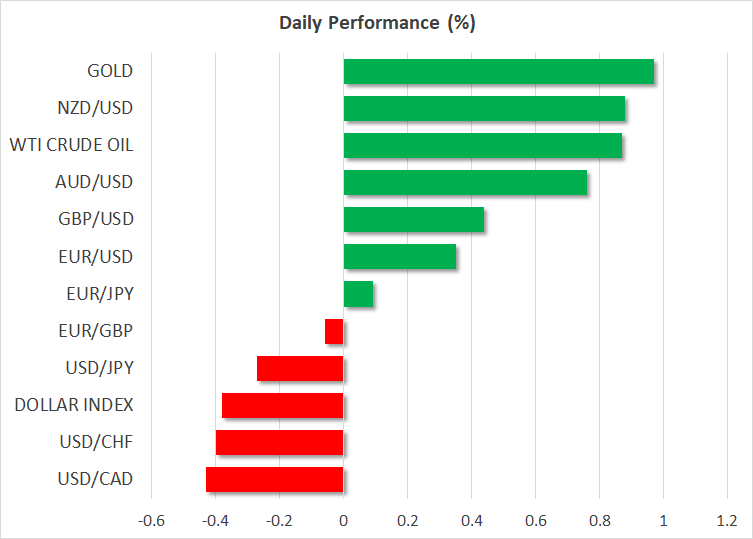 Focus on earnings as jitters subside

Worries about soaring inflation, supply-chain chaos and slowing growth in China were put on the back burner on Tuesday as investors turned their attention on the Q3 earnings season that kicked off last week with a bang. Shares in America’s tech juggernauts closed more than 1% higher on Monday, pulling the Nasdaq Composite up by 0.8%, on growing optimism that Q3 will be another bumper season. The S&P 500 also extended its rebound, gaining 0.3%, as 80% of the index’s constituents that have reported so far all beat their earnings estimates.

That optimism will be put to the test later today when Netflix announces its results after the market close, while Johnson & Johnson, Procter & Gamble and United Airlines will be among some of the other highlights.

US equity futures were edging higher ahead of Tuesday’s earnings, with Asian shares also enjoying a lift from Wall Street’s positive mood music. Fears about a regional drag on growth by the supply constraints, surging raw materials prices, a property crisis and power outages in China that put a dent in its Q3 GDP appear to have subsided rather quickly.

Investors seem hopeful that Chinese policymakers will be able to successfully steer the economy through the latest storm, with their handling of the Evergrande debt fallout providing some reassurance.

European traders were more cautious, however, with the major bourses mixed at the open.

The energy crunch in Europe and Britain remains a major concern for investors and the broader supply constraints impacting manufacturers don’t appear to be easing either. Flash PMI data for October due on Friday should shed more light on whether the problems are getting worse.

US manufacturers are also feeling the pain of global supply disruptions, particularly for semiconductors that contributed to the 1.3% drop in industrial production in September, while worker shortages are another headache. However, America is so far not facing soaring power costs due to it being self-sufficient in energy supply and this might be feeding into policy expectations.

If energy prices in the US don’t rise significantly and other price pressures prove to be temporary, then the Fed is unlikely to bring forward its first rate hike. In contrast, other central banks like the Bank of England will have to respond if higher fuel prices begin to push up inflation expectations as there would be a bigger risk of inflation becoming stickier.

US Treasury yields at the short end of the curve tumbled after the industrial output data as the urgency for the Fed to raise rates sooner rather than later was seen to have receded somewhat. However, expectations that other central banks are more likely to be forced to begin tightening earlier than anticipated in fact strengthened, pressuring the US dollar.

The dollar index slid to a three-week low as the greenback declined against all its major peers, including the safe havens Japanese yen and Swiss franc.

The euro climbed above $1.1650, while the pound was eyeing the $1.38 level. The Australian dollar shot up to 1½-month highs despite dovish meeting minutes by the RBA earlier today. Markets are no longer as convinced about dovish rate path forecasts by policymakers following the clear strong upward trend in inflation around the world.

But one central bank that hasn’t shied away from turning hawkish is the Reserve Bank of New Zealand, which could be tempted to hike rates by 50 basis points in November. These expectations are bolstering the kiwi, which is today’s best performer as it surges past the $0.71 level.

Another beneficiary of the dollar selloff was gold, gaining 1%.

Aside from the earnings announcements, investors will also be watching Fed speakers today, including Governors Bowman and Waller, and regional heads, Daly and Bostic.