It will be a “Bank week” for the US as the four largest banks by market capitalization will kick off the earnings season by reporting their financial statements for the third quarter. JPMorgan Chase, Citigroup and Wells Fargo will be announcing on Tuesday, while Bank of America will release its own numbers on Thursday. Under a lower interest rate environment, traders will be looking for any signs of weakness in net interest rate margins. Yet, the banking results may not appear as ugly as in other S&P 500 components.

The Fed has cut interest rates twice in the third quarter and is poised to deliver another rate reduction this month as the US central bank is pushing efforts to rebalance the economy and particularly the bleeding manufacturing sector in the absence of evidence that Washington and Beijing will ever find a comprehensive compromise to the more-than-a-year-old trade war.

What does the above mean for the banking sector? Theoretically, it means that banks and other financial institutions will be forced to lower the charge on loans and therefore reduce the rate on deposits, obtaining less income on their core business lending activities. Due to a more diversified asset portfolio, bigger banks could generate profits in other services and face a lower risk of falling earnings than smaller banks which heavily depend on core lending. Yet this does not rule out immediate pain for banks such as JPMorgan and Bank of America which have big retail operations. 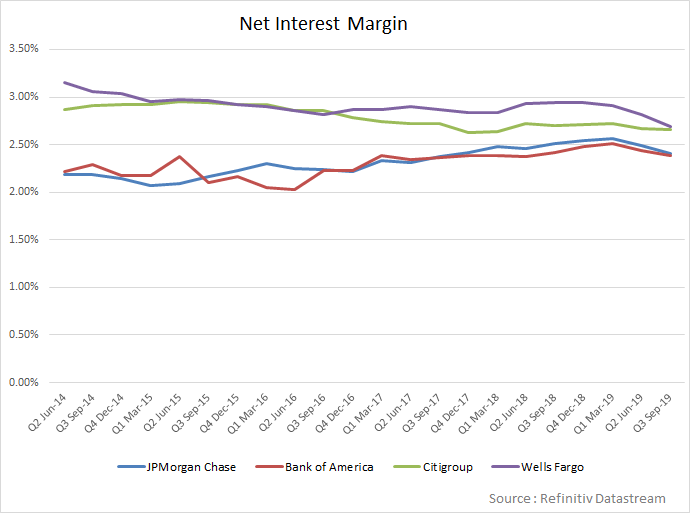 JPMorgan Chase & Co, the largest bank by market cap, is still at a bullish trend in Wall Street, with its stock price reaching fresh record highs last week. Having beat estimates twice in the previous quarters, the bank, which is planning to further increase its market share by adding 400 branches to its group, is expected to report earnings of $2.45 per share in the third quarter compared to $2.51 in the June quarter, marking a 4.7% annual rise. Total revenues are also seen falling from $29.5 billion to $28.4 but hold up by 2.3% on a yearly basis, with the corporate and investment banking division experiencing the largest decline. Interest rate margin, which is the difference between what the bank earns from loans and pays to depositors divided by the average amount of assets, is anticipated to inch down to 2.41% from 2.49%.

Bank of America, which managed to digitize its branches and cut costs, continues to face a flattening stock price more than two years now. Earnings per share are forecast to arrive weaker at $0.50 and down from $0.75 reported in the previous quarter, registering an annual decline of 23%. While net interest margin is said to have pulled back to 2.39% from 2.44% and stay steady over the year, revenues are expected to come higher in the third quarter at $22.7 billion versus $23.2 in Q2, but still appear softer on a yearly basis.

Citigroup had an impressive start to the year in Wall Street before sitting on the sidelines. Unlike other banks, the company, which was nominated as the best bank in terms of mobile banking, seeing a remarkable increase in digital users, is anticipated to report a higher EPS at $1.95 versus $1.83 in the preceding quarter and $1.73 in the same period a year ago. As regards revenues, though, those are expected to ease to $18.5 billion in Q3 and hold above $18.3 registered a year ago, with its corporate banking division losing the most. Net interest margin is anticipated to tick down to 2.66% from 2.67% in Q2 and 2.70% in Q3 2018.

Traders would like to hear about the outlook from the new CEO Charles Scharf at his first earnings call as the 2016 fake account scandal continues to weigh on the bank’s reputation. After strongly rebounding to $1.30 in Q2, earnings per share are expected to fall to $1.14 in Q3, slightly weakening from last year. Revenues are also projected to diminish by 1.8% to 21.1 billion q/q and by 3.4% since the previous year, with net interest margin retreating by 4.6% q/q and by 8.5% y/y to 2.69%.

While the above estimates predict a challenging quarter for the financial sector, the industry is still in a better position than other segments in the S&P 500 universe such as energy, basic materials and technology which are more exposed to international transactions and hence to the strengthening dollar. The dollar has appreciated by around 2.4% in the third quarter against a basket of six major currencies, making US exports more expensive abroad, with import tariffs and retaliation by China adding more pressure to businesses.

Despite the sell-off at the end of July, the S&P 500 stock index managed to recoup its losses and maintain in a 10-month old uptrend. With technology, financials and healthcare weighing heavily on the index, worse-than-expected banking results accompanied with disappointing earnings in the technology sector could pressure the index towards the August troughs around 2,825, while lower the next target will be the 2,728 key support level – especially if trade tensions remain heightened during the month.

In case earnings releases show that things may not as bad as markets believe, the index could retest the 3,000-3,027-resistance area, while a bigger surprise in the data may also open the way towards the 3,100-3,184 region.