The Fed’s favorite inflation measure, the core Personal Consumption Expenditure (PCE) index will be out on Friday at 13:30 GMT accompanied with personal consumption and income data. The release which regards the month of January is expected to show a slightly stronger inflation for the second consecutive month, but the news will not affect much markets’ increasing expectations of a rate cut, probably giving little support to the dollar that started the week in the negative territory.

Fed may not think twice to cut interest rates if needed

At the end of 2019, markets were confident that the cocktail of the phase one trade deal between the US and China and the Brexit agreement could cheer the struggling business world at least in the first half of the year even though some key issues remain open. Unexpectedly, though, the coronavirus outbreak turned into something more serious as its fast-deadly spread outside China’s borders in February and the lack of an antidote forced business closures, travel bans and quarantines, restoring risk aversion in global markets and fears of a growth slowdown instead.

The truth is that the US economy is generally faring better than others in Europe and Asia although it had a challenging year in 2019. That said, if supply chains and flight carriers in the rest of the world lock down their activities, the US is likely to feel the pain too. Particularly, the preliminary Markit PMI survey for the month of February has already warned over a receding growth in the first quarter. The services index plummeted surprisingly below the 50 mark that separates contraction from expansion in the sector and to the lowest since October 2013, while the manufacturing index also declined, barely holding above that threshold, amid fears the virus could scale down demand across sectors and freeze business spending. 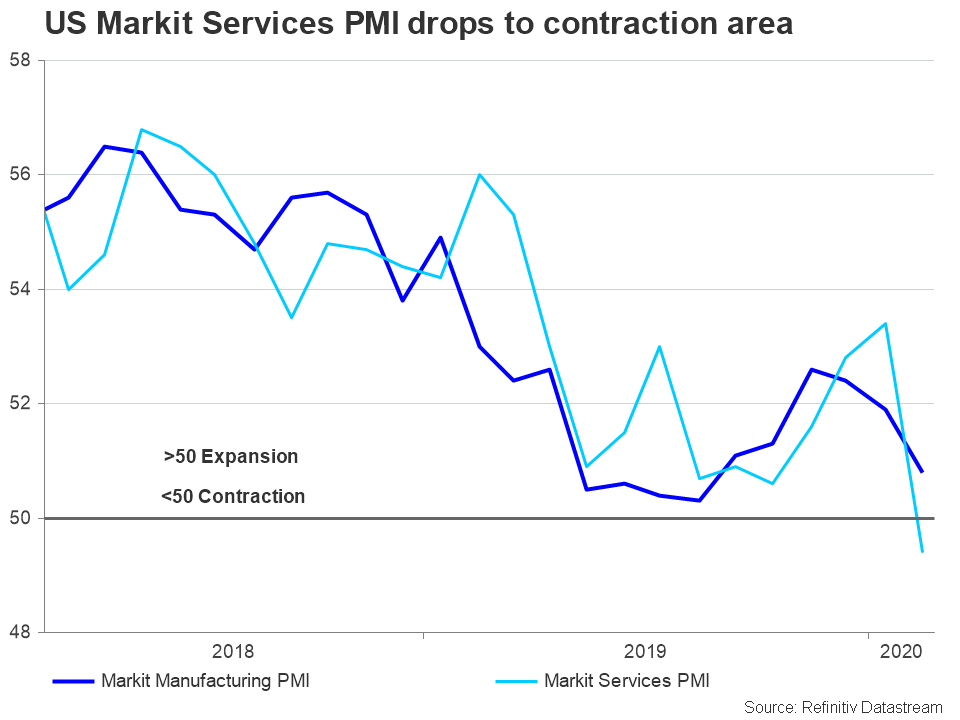 Besides falling GDP growth, inflation, which the Fed is closely monitoring to detect any need for monetary adjustment, could also resume its downward direction on the back of a slowing global demand, leaving policymakers behind their 2.0% target. If this scenario materializes, the Fed chief Powell, who previously pledged to keep interest rates unchanged this year, will likely call for additional rate cuts. And he probably won’t think twice as the Fed unlike other major central banks, whose interest rates are around zero, has still some room for monetary easing. Still, whether there will be a one 25bps rate cut as soon as in June or more later in the year as the fed funds futures currently price in, that will depend on how long it will take to contain the virus and how bad its economic impact on the data will be in the coming months.

Any rise in inflation may be temporary

Turning to Friday’s data, the case for a rate cut will not be reduced if the core PCE index inches up from 1.6% to 1.7% on a yearly basis in January as analysts anticipate, and personal consumption and income hold steady at 0.2% and 0.3% month-on-month respectively. Investors, however, will not rush to downgrade their rate projections either as January’s data may have not fully captured the impact from the virus, making a downside reversal in the numbers in the coming months a likely scenario. 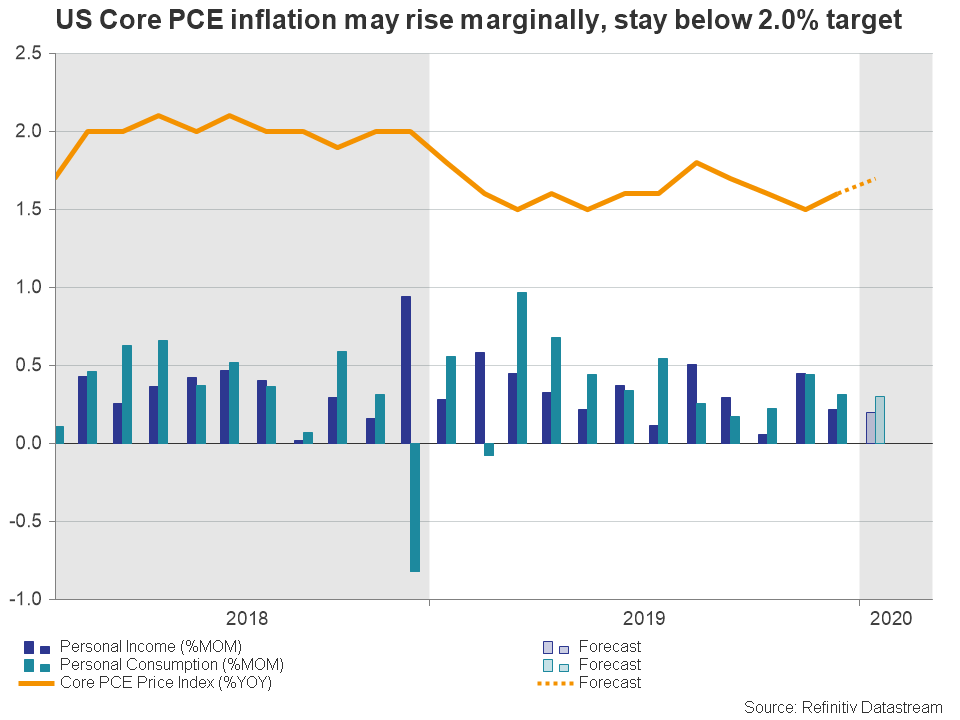 Instead traders could show patience until further notice, preventing the dollar from recouping this week’s sharp losses or just letting it enjoy a short-lived upside correction in case the release comes in stronger-than-expected. Still, any upside surprise should be convincing enough for the greenback to challenge last week’s peaks.

Looking at USDJPY, potential support to downside movements could be the 110.00-109.70 area, while lower 109.30 could be another level to watch before all eyes turn to the ascending trendline.