Trade policy is not the Fed’s responsibility, but inflation definitely is, and the US central bank will act appropriately to elevate its favorite price measure back to its target. On Friday at 1230 GMT, July’s core PCE index will likely call for further monetary easing. The dollar, though, may shrug off the data and keep the focus on trade headlines as a rate cut is fully priced in by the markets.

Speaking at the Jackson hole annual symposium, Fed chair Jerome Powell said that the US economy is in a “favorable place” despite facing headwinds, citing the labor market as a key foundation. Indeed, although it slowed gradually since the start of 2018, US GDP growth has been fluctuating in the positive territory for more than five years now, remaining relatively the highest among those in major markets. The elevated wages and the low unemployment rate have been supportive to consumer spending that is currently preventing the weakness in the manufacturing sector from dragging the economy into a steeper downfall.

Nevertheless, the pullback in both the core PCE and CPI inflation metrics indicates that wage growth and hence consumption are not helpful enough to drive price growth towards the Fed’s 2.0% target. With the strong dollar making imports cheaper to buy domestically and businesses being reluctant to offer higher paychecks amid fears the US-Sino trade war could further harm their profit margins, the Fed may find it hard to achieve its inflation goal. Friday’s data could endorse this view if the core PCE price index appears steady at 1.6% on a yearly basis in July as analysts expect. At the same time personal consumption and personal income readings are anticipated to hold in the comfort zone, with the former inching up to 0.5% m/m from 0.3% in June and the latter edging down from 0.4% m/m to 0.3%. 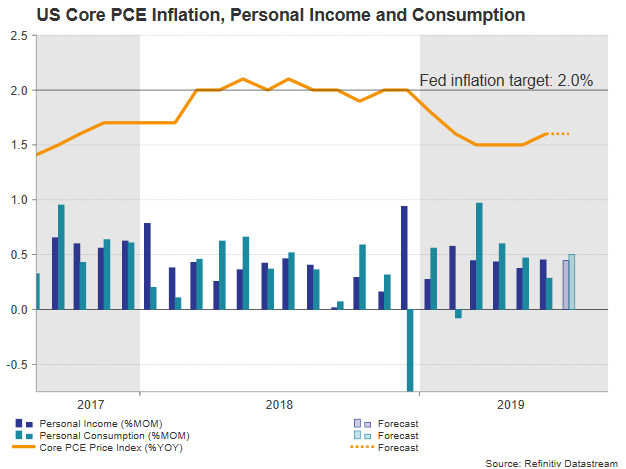 Waiting for the Fed to save the economy

Whenever there was any question about a second rate cut by the Federal Open Market Committee, those doubts have now dissipated. The recent exchange of tariff threats between Washington and Beijing and the latest recession warning by the inverted 2-year and 10-year US Treasury yields were more than enough to fully convince markets that a more accommodative monetary policy in September is a done deal. Having reached twelve rounds of failing talks, the US and China continue to pressure each other, flagging that differences between the sides are still wide open and no solution is likely unless one pulls back its demands. 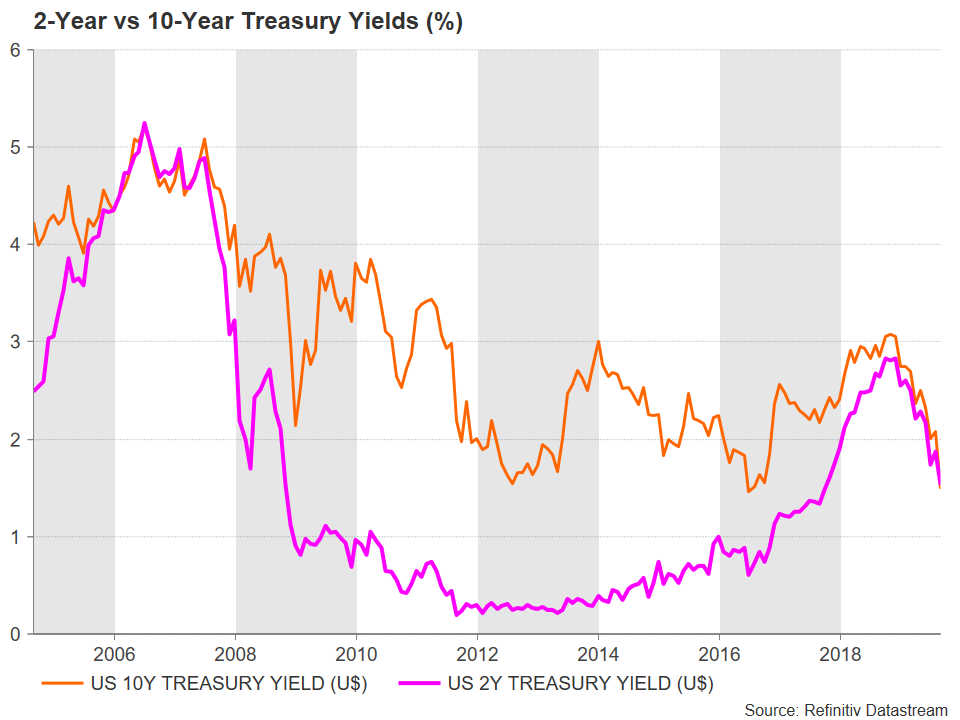 Trump takes every chance he gets to criticize the Fed about not moving fast enough to lower interest rates, making the central bank solely responsible for saving the country from a sharp growth slowdown. Headlines have also been questioning whether the Fed should act more aggressively by slashing rates by 50bps instead of 25bps already fully priced.

Aggressively or not the central bank could keep reducing its borrowing costs to lessen the negative consequences of a slowing global growth but this would not solve the underlying issues the economy is facing, such as the trade war.

Dollar may not react much

In FX markets, traders have already safely locked their positions as the end of the month is approaching and are eagerly waiting for the September FOMC policy meeting to give them the next direction. Therefore, the dollar may not appear very sensitive to Friday’s data unless the numbers deviate significantly from forecasts, where a big downside surprise would likely raise worries about a decreasing consumer demand and vice versa.

Versus the safe-haven yen the greenback could slip towards the 105.00 level in the wake of disappointing headlines in the coming sessions, while beneath that barrier, the new 3-year low of 104.44 will be the next target.

Alternatively, should USDJPY reverse to the upside, immediate resistance could be detected within the 106.60-107.00 area, while slightly higher, 107.60 could also be in watch.