Traders will be bombarded with an avalanche of US economic data on Wednesday before it all goes quiet on Thursday for Thanksgiving Day. Hitting the markets first at 13:30 GMT are durable goods orders and the second estimate of Q3 GDP growth, with personal income and spending numbers following soon after at 15:00 GMT, along with the all-important core PCE price index. With the dollar enjoying a bit of a lift from encouraging PMI indicators, more upbeat data could push the US currency well beyond the 1½-week highs achieved this week.

After slashing interest rates three times over the past five months, the US Federal Reserve appears on course to achieving a rare feat for central banks – a soft landing of the economy. It wasn’t that long ago that markets were fearing the worst and predicting a recession for the world’s largest economy. But after a brief inversion of the yield curve during the summer, Treasury yields have recovered, with both the closely watched 3-month/10-year spread and 2-year/10-year spread un-inverting. However, the spreads remain worryingly close to zero, suggesting it wouldn’t take much bad news to invert the yield curve again.

For now, though, the Fed seems to have done enough to soothe the markets and the latest indicators for the housing and manufacturing sectors point to an uptick, easing concerns about an imminent downturn. Investors will now be anxiously assessing the next batch of US data due on Wednesday, hoping that they will further allay worries about growth.

Flurry of data may fail to excite

That reassurance may not come, however, from durable goods orders, which are forecast to have decreased by 0.8% month-on-month in October, adding to September’s 1.2% decline. Core capital goods orders, which exclude defence and aircraft orders and are used in GDP calculations, are forecast for a third straight monthly drop in October, with analysts expecting a fall of 0.3%. 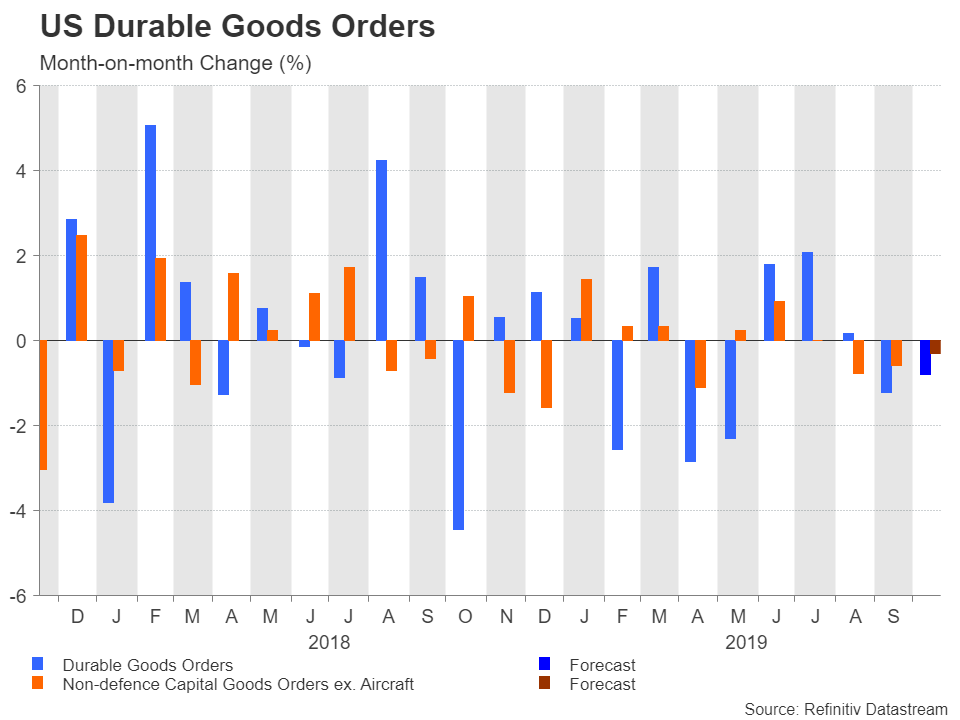 The second estimate of GDP growth may also bring little excitement to the markets if the forecasts are to be believed. Expectations are that the preliminary reading of 1.9% annualized growth in the third quarter will be left unrevised. However, any surprise sharp revision is likely to generate some knee-jerk reaction for the greenback if it turns out that GDP performed significantly better or worse in the third quarter, which could influence policymakers’ views of the economy.

Focus on PCE inflation and consumption

But the real focus on Wednesday will be on the personal income and outlays report, which contains the Fed’s favourite inflation measure as well as the latest figures on consumption. The core PCE price index is projected to have held steady at 1.7% year-on-year, falling short of the Fed’s 2% target for the 10th consecutive month, giving policymakers little reason to fret about inflation. 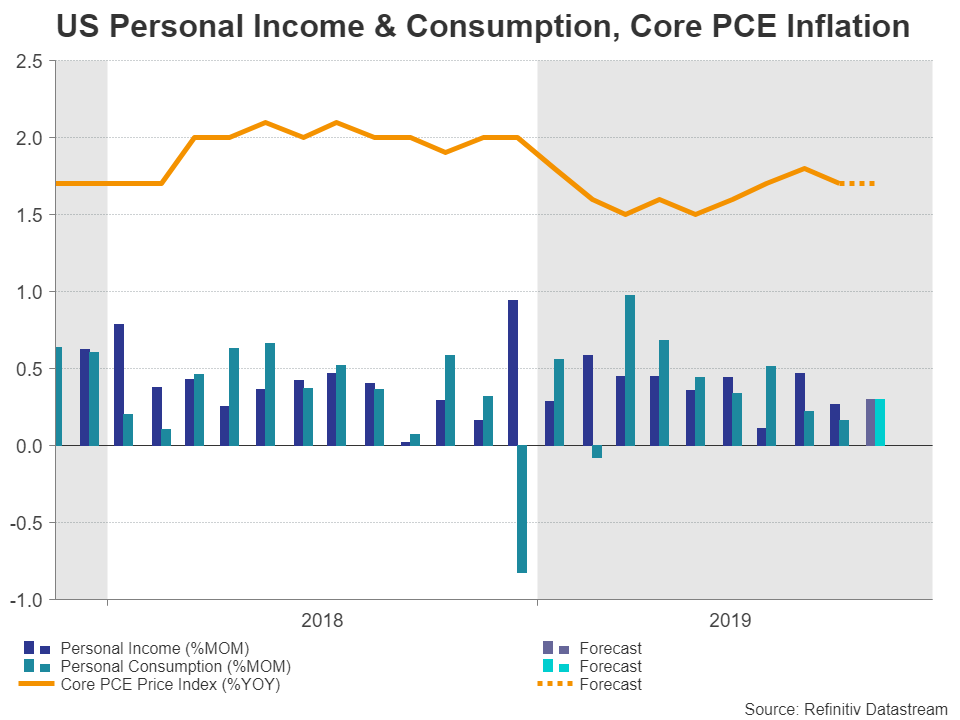 As far as the markets are concerned, however, they will be hoping to see healthy income and spending numbers given that consumption is the biggest growth engine of the US economy. Personal income is forecast to have increased by 0.3% m/m in October, the same pace as in September, while personal consumption is also expected to have risen by 0.3% m/m, picking up pace slightly from the prior month.

With investors breathing a sigh of relief from the recent broadly positive data out of the US, any negative surprises in this week’s releases could catch markets off guard and trigger some volatility ahead of the Thanksgiving Holiday. However, with optimism running high that US and Chinese negotiators are closing in on a partial trade deal, any sell-off in the US dollar is likely to be limited.

The dollar index could retreat back towards its 200-day moving average (MA) near 97.60 if the data was to reignite doubts about the strength of the US economy. Slipping below the 200-day MA would draw traders’ attention to the recent support level of 97.10.

If the numbers fall mostly in line with expectations, the dollar index should comfortably be able to hold above the 50-day MA, whereas an upbeat set of figures could fuel the greenback’s recent advance, putting the index on track to retest the 2½-year high of 99.67 it brushed on October 1.