It might be an interesting week for the greenback, with the latest CPI inflation numbers hitting the markets on Tuesday at 13:30 GMT, ahead of retail sales figures on Thursday. Overall, these are likely to confirm the American economy remains in good shape, reinforcing the Fed’s ‘on-hold’ stance. As for the dollar, its strength is unlikely to abate anytime soon, as there’s little alternative for investors seeking higher interest rates alongside safety.

A decent house in a bad neighborhood

The US economy may have lost some of its shine, but it’s still in a much better position than most other developed economies. The labor market is tight, inflation is running near the Fed’s target, and economic growth is hovering around the 2% mark. Consumption – which is by far the biggest contributor to US growth – is strong, supported by growing real wages.

The only worrisome spot is the manufacturing sector, which remains in dire straits amid heightened uncertainty about the outlook for trade. On the bright side though, that weakness doesn’t seem to be spilling over into the broader economy.

All this has investors thinking that the Fed will stick to its on-hold stance over the coming months, with Fed funds futures pointing to a mere 30% probability for a rate cut by July. That said, this percentage jumps to 80% by the end of the year, so markets don’t expect the Fed to stay sidelined for very long either.

Upcoming data to reaffirm this narrative

Turning to this week’s releases, they are likely to reinforce this cheerful narrative. Inflation as measured by the consumer price index (CPI) is forecast to reach 2.3% on a yearly basis in December from 2.1% in November, though most of that improvement is likely owed to movements in oil prices, as the core rate is projected to hold steady at 2.3%. 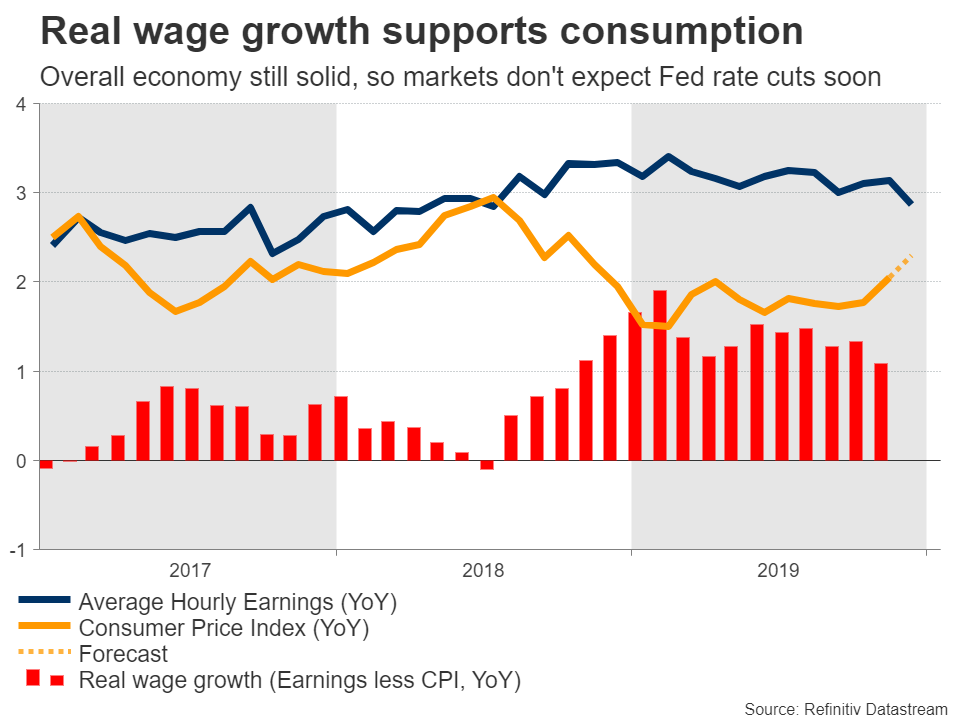 If there’s any surprise in the CPI numbers, the risks seem skewed towards an upside one, considering that the Markit services PMI for the month showed firms increasing their prices at the fastest pace since February.

Retail sales are also forecast to have picked up speed. In particular, the retail control group – which excludes several volatile items and is used in GDP calculations – is expected to have risen by 0.4% on a monthly basis in December, from 0.1% earlier. If met, such a print would signal that consumption continues to fire on all cylinders.

Still no real alternative to the dollar

As for the dollar, even though the year started with many prominent strategists calling for losses, it has defied those gloomy calls to record healthy gains so far. It’s difficult to envision that changing going forward.

The argument was that with trade tensions subsiding, global growth bottoming, and US election uncertainty setting in, investors might deploy funds outside America.

The real question though, is where else can investors go? The Eurozone and Japan are barely growing, while interest rates in both economies are at rock bottom, diminishing their attractiveness as an investment destination. Emerging markets, for their part, seem extremely risky in such an unstable trade environment.

For the dollar to really turn lower, either the Eurozone needs to launch a substantial fiscal spending package that boosts growth and therefore helps the euro recover, or the Fed has to start cutting rates again – neither of which seems likely over the coming months.

Taking a technical look dollar/yen, if the bulls stay in charge, further advances may encounter initial resistance near the 110.70 area.

On the downside, immediate support to declines could come from 109.70 hurdle, where a downside violation might turn the focus back towards the 108.40 zone.