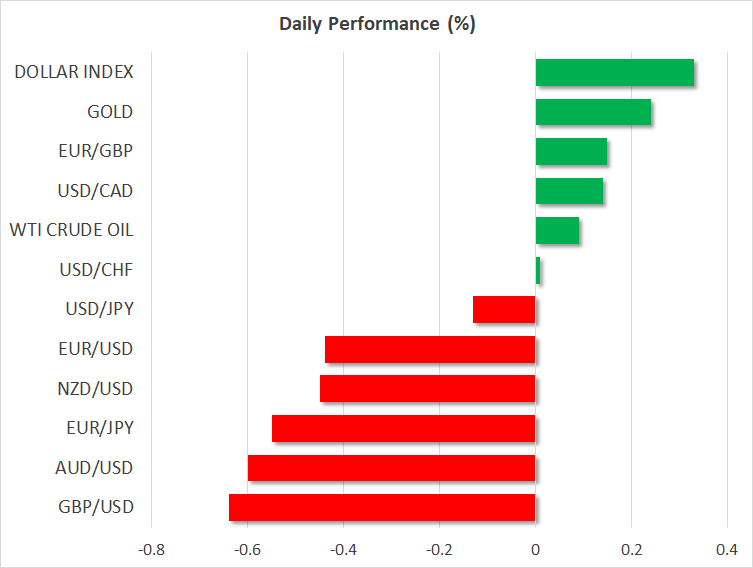 Day Ahead: Italian budget to weigh on the euro; Brexit to remain under the spotlight

Tuesday’s economic calendar will be lacking important data releases later in the day, with the Italian budget story remaining in the center of attention, while Brexit will continue to affect investors’ sentiment.

On Monday, comments by Pierre Moscovici triggered a fresh wave of selling in the euro market as the EU’s commissioner for Economic and Financial Affairs said that the Italian budget which aims for a deficit of 2.4% is “a very significant deviation” from earlier commitments given the country’s massive public debt of 133% of GDP. The remarks flagged that conflicts between Italy and the EU are not close to cooling down, with the euro slipping to a more-than-a-month low of 1.1504 today. Adding to the negative sentiment were recent headlines messaging that the Italian government is not willing to change its fiscal plans, a sign that the common currency is not near to recover yet. Note that the Italian Deputy Prime Minister, Luigi Di Maio will be holding further meetings in the next few days with the Italian Minister of Economy, Giovanni Tria, the Prime Minister Giuseppe Conte, and the Deputy Prime Minister and League Leader Matteo Salvini. A formal presentation of the budget to the EU, though, is anticipated by October 15.

Meanwhile in the UK, the annual Conservative Party Conference continues for the third day with the UK Prime Minister, Theresa May, preparing to make new proposals on the Irish border to the EU in an attempt to bring the sides closer before Brexit negotiations resume on October 18. While May’s fresh efforts to solve disagreements on the Irish border provided some support to sterling on Monday, the positive effect soon faded, and the pound reversed back to the downside ahead of May’s scheduled speech at the conference on Wednesday. As for today, investors will look to comments by former foreign secretary Boris Johnson at 1200 GMT, as he has been spearheading the “opposition” to May’s Chequers plan within the Tory party.

In terms of data releases, total vehicles sales for the month of September will come out of the US at 1930 GMT, while in New Zealand the outcome of the bi-weekly milk auction will hit the markets at a tentative time. Energy markets will be in focus as well as the American Petroleum Institute is due to publish its weekly report on US crude oil inventories today at 2030 GMT.

Elsewhere, Services PMI for the month of August will be available in Japan at 0030 GMT on Wednesday, while an hour later, Australian building approvals will gather some interest.

As for today’s, public appearances, the Fed chair Jerome Powel will be speaking on the outlook for Employment and Inflation” before the National Association for Business Economics 60th Annual Meeting at 1645 GMT. At 1800 GMT, Dallas Fed President Robert Kaplan (non-voting member) will be participating in Q&A session before a community luncheon. Earlier at 1400 GMT, Fed Vice Chair for Supervision Randal Quarles (permanent voter in the FOMC) will be testifying on “Implementation of the Economic Growth, Regulatory Relief and Consumer Protection Act” before the Senate Banking Committee. In the Eurozone, ECB member Francois Villeroy is preparing to make remarks at 1430 GMT.

Chinese, South Korean and German markets will be closed on Wednesday for a public holiday.