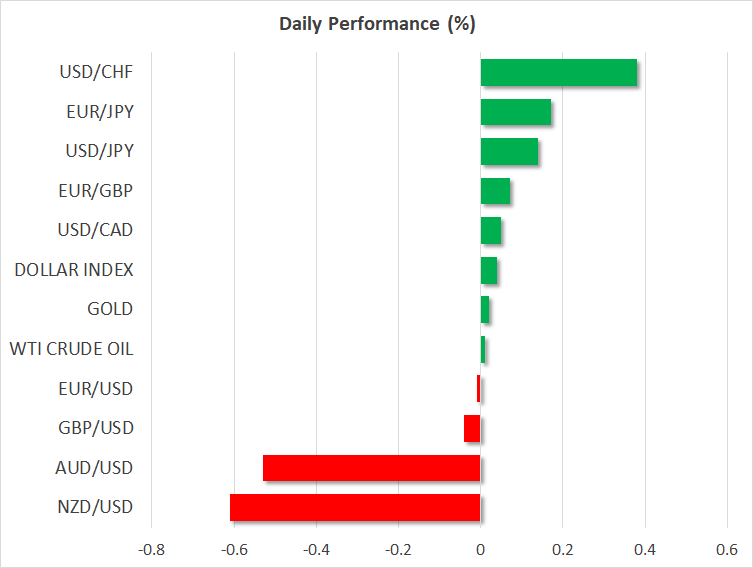 The ADP employment report will display the number of job positions added to the US private sector in September at 1215 GMT with investors waiting for some clues ahead of the all-important Nonfarm payrolls Job statement due on Friday. According to analysts, the number of employees in the non-farm private sector increased by 185k compared to a rise of 163k in August. While an upward surprise could lift the dollar higher, that cannot be a guarantee that Friday’s NFP hiring will be more encouraging as well since the reports are not as strongly in sync as in the past.

A few hours later at 1400 GMT, the ISM non-manufacturing PMI for the month of September could be another market mover for the greenback. Forecasts are for the index to slow down by 0.5 points to 58, though that may not be much of a worry given that any mark above 50 indicates an expanding industry.

Staying in the US, the Energy Information Administration will publish data on US oil inventories for the week ending September 28 at 1430 GMT, probably bringing a fresh wave of volatility to oil prices. Predictions support an increase of 1.98 million barrels in crude stocks from a 1.85mn rise seen previously. Gasoline stocks are expected to build up too but less than in the previous week, whereas distillate inventories are projected to post a softer decline.

Elsewhere, the Australian Bureau of Statistics will update Australia’s trade figures at 0130 GMT on Wednesday, with analysts seeing the positive trade balance easing for the second straight month to A$1.40 billion in August. In July, the trade surplus stood at A$1.55bn.

Meanwhile, in the EU, the Italian budget story will continue to keep investors on toes. On Tuesday headlines showed that the Italian government is not planning to change its budget plans, which aim for a public deficit of 2.4% of GDP for the next three years. Today,however, the Italian Deputy Prime Minister, Luigi Di Maio revealed that Rome is considering lowering its deficit targets after 2019, with some official sources stating that these could drop to 2.2% and 2.0% in 2020 and 2021 respectively. This indicated that Italy is willing to appease its EU counterparts who claimed that the country’s budget goals deviated significantly from earlier commitments.

Chinese markets will remain closed for the rest of the week due to a public holiday.