US retail sales for the month of July will hit the markets on Friday at 12:30 GMT and expectations are for a sharp slowdown from June’s remarkable growth. While a weaker data set is highly expected, traders may pay attention to the size of damage that the virus caused on consumption. The outcome may provide some policy direction, driving the dollar accordingly.

US retail sales to sharply decelerate in July

Following May’s historical monthly expansion of 18.2%, US retail sales beat forecasts and surged by a whopping 7.5% m/m rate in June as the lockdown loosening allowed consumers to dine out, shop for clothing, and spend on big-ticket items such as vehicles.

While new Covid-19 infections started to rise vertically in America’s most populous states during June, there were significantly more new cases in July, with the country becoming the center of the pandemic once again as infections advanced to a new peak. As a result, state governments postponed further re-opening and reimposed some restrictions on businesses and public spaces to control the situation.

Consequently, with virus fears mounting, markets started to price in that the limited access to shopping and other entertainment places could undercut consumption and ease the pace of growth. Therefore, weaker retail sales on Friday may not be a big surprise to investors. However, what is still uncertain is the magnitude of the deceleration, which will indicate how badly restrictions hit the economy. Analysts are currently expecting a depressed monthly expansion of 1.9%, which would still be above pre-pandemic levels, but way below June’s sizable 7.5% growth. The retail control measure, which excludes volatile items and is a more precise gauge of consumer spending, is also expected to soften to 0.8% m/m from 5.6% previously.

Separately, a more updated report on consumers’ sentiment released by the University of Michigan on the same day will be noteworthy, likely showing that appetite for consumption further diminished early in August. Specifically, the index is said to ease by 0.5 points to 72, remaining at 9-year lows. 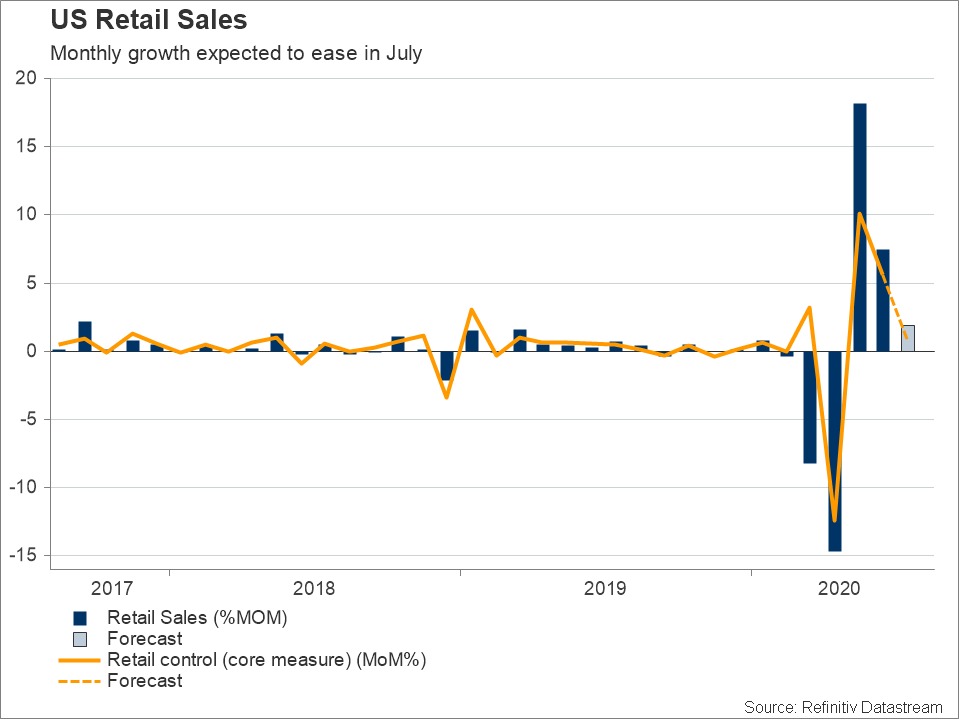 Should the data miss forecasts by a wide margin, the dollar could drift lower amid concerns that the White House and the central bank may need to unleash more stimulus to support consumers and businesses. After talks over the next round of fiscal aid collapsed in the Congress last week, President Trump was able to sign executive orders and extend the expired unemployment benefits at a reduced rate on Saturday.  His pledge to cut taxes on capital gains was another positive headline on Tuesday. However, in the bigger picture, the economy is still lacking a timely and substantial aid package, and that keeps some downside pressure on the greenback as other economies are handling the virus resurgence more effectively and have already settled their fiscal stimulus plans.

Meanwhile, the ongoing debate in Congress is a headache for the Fed too. Its next policy meeting is in mid-September, and unless Democrats and Republicans secure a deal by then, the central bank should act first to fund the economy if the unemployment rate shoots up and spending shrinks. However, interest rates are already near zero and its balance sheet has expanded to record levels, so the Fed chief may need to go the extra mile to find alternative policies. Besides, September is expected to be a compact month as the new fiscal year starts on October 1.

News that Russia has approved its “Sputnik” vaccine for use hurt traditional safe-haven assets such as gold and the Japanese yen, but did not affect the greenback, which found support from Trump’s temporary political relief and rising yields. Taking into account US-China geopolitical tensions and the unpredictable virus and vaccine evolution, one could comfortably say that the global economic environment remains risky and traders may not easily abandon the world’s reserve currency, hence the risk for the dollar is still tilted to the upside and any downside move from here could easily be corrected.

EUR/USD will be in focus when US data becomes public on Friday. The pair managed to rally above a long-term resistance trendline stretched from 2008 peaks, but now it faces the risk of a trend reversal as a bearish double top pattern seems to be forming around the 1.1900 level.

Should the US data beat forecasts, the price could retreat below the 1.1690 neckline, and unless the 20-day simple moving average (SMA) and the trendline provide strong footing, the sell-off could extend towards the 1.1600 number.

On the other hand, if the figures disappoint significantly, adding more pressure for stimulus extension, EUR/USD could re-challenge the 1.1800 barrier before meeting the 1.1900 ceiling.