With central banks stepping back, the yen looks fragile

Central banks across the world are starting to step back from the ultra-loose policies they enacted last year, as widespread vaccinations and government spending do the heavy lifting. We are still in the early stages of this process, but the destination seems clear: higher interest rates. The biggest exception to this trend might be the Bank of Japan, which makes the yen seem highly vulnerable.Higher ground

How quickly things change. A year ago, the global economy was in free fall. Skip forward to today and most countries are healing their wounds at an incredible pace. Much of that comes down to medical science delivering the vaccines quickly. The other part comes down to the sheer amount of stimulus that governments rolled out, simply unprecedented outside of wartime.

The speed of the recovery has caught everyone by surprise, including governments and central banks. Even inflation has made a comeback in several countries, although that's mostly supply-chain disruptions pushing up prices, not consumers going on a shopping spree.

Still, the improvement has been enough for many central banks to rethink their pandemic-era emergency programs. From the Bank of England to the Bank of Canada to the Reserve Bank of New Zealand, policymakers have started to outline a path towards higher interest rates. It's baby steps, but that's how it begins.

The Fed could be the next major central bank to join this club, perhaps by late summer or autumn. Vice Chairman Clarida recently said that a discussion about scaling back QE purchases could begin at the coming policy meetings, if economic data remains strong.

The outlier in this story is Japan. While the nation did an excellent job of handling the pandemic, with infections and deaths being far lower than most Western countries, its vaccination rollout has lagged behind. This implies that Japanese shoppers will live under the shadow of the health crisis for a while longer. 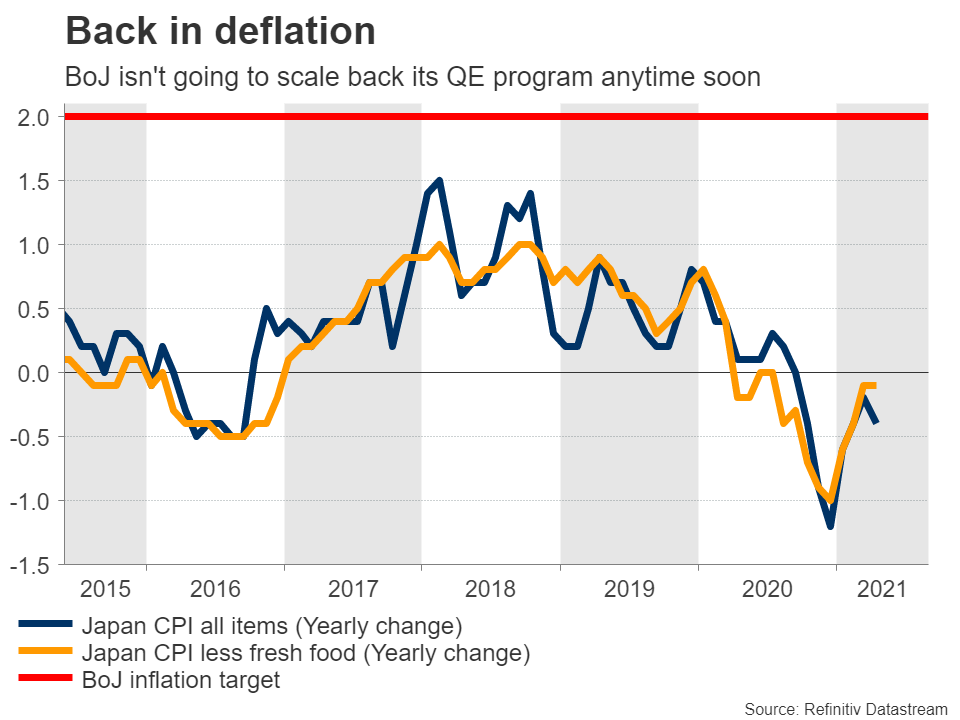 Reflecting all this, the economy is not doing great. It contracted during the first quarter of the year and the latest inflation data show the nation is still trapped in deflation. This of course has been a chronic problem in Japan, linked to aging demographics and cautious saving habits.

The bottom line is that the Bank of Japan won't be rushing to exit its quantitative easing program, or raise interest rates for that matter. It hasn't raised rates since 2007, and it is highly unlikely to do so anytime soon. It would take several years of strong growth and high inflation before such a conversation even took place. In a country that has been battling deflation for decades, that's a low-probability outcome.

Yen is all about rate differentials

What does all this imply for the yen? In a nutshell, it's not good. Interest rate differentials between economies are crucial for the FX market. This yield spread essentially acts like a gravitational pull for currency pairs. 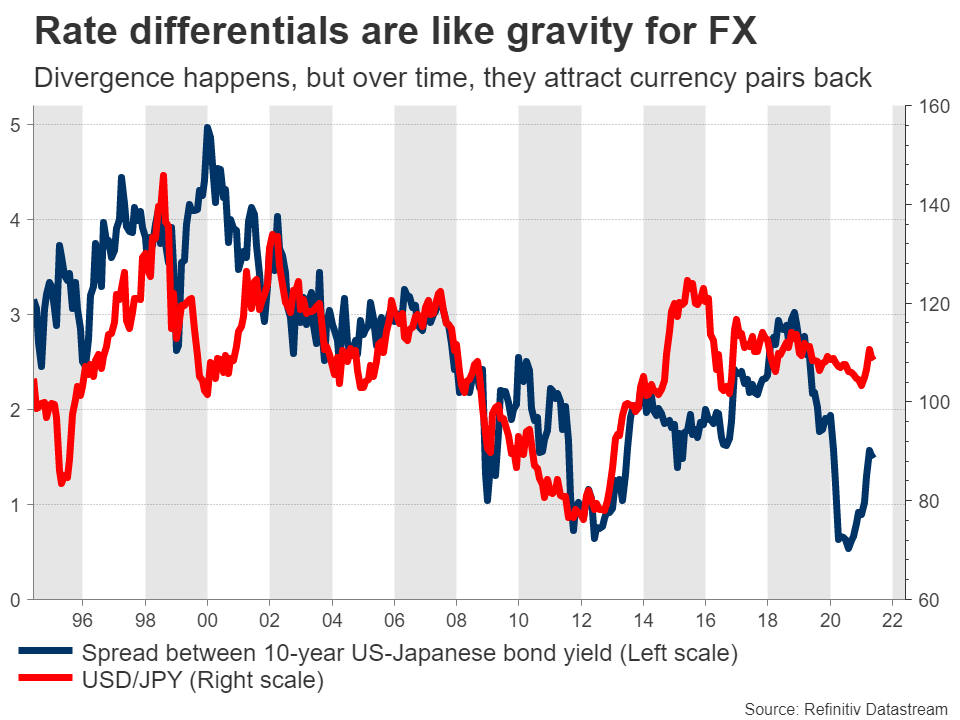 It is even more important for the yen because the Bank of Japan keeps a ceiling on Japanese yields through its yield curve control strategy. This means that when foreign interest rates rise, Japanese rates cannot participate in that rally and the yield differential grows wider. That makes the yen less attractive to hold relative to foreign currencies.

In other words, in an environment where global central banks are moving towards higher rates but the Bank of Japan isn't, the yen will probably suffer.

What could change this narrative?

It's always fruitful to consider what could derail a view. In this case, it would be any shock that slows down the pace of normalization of foreign central banks. For example, a new 'monster' covid variant that is highly resistant to existing vaccines, or some other unforeseen shock that hits global markets. 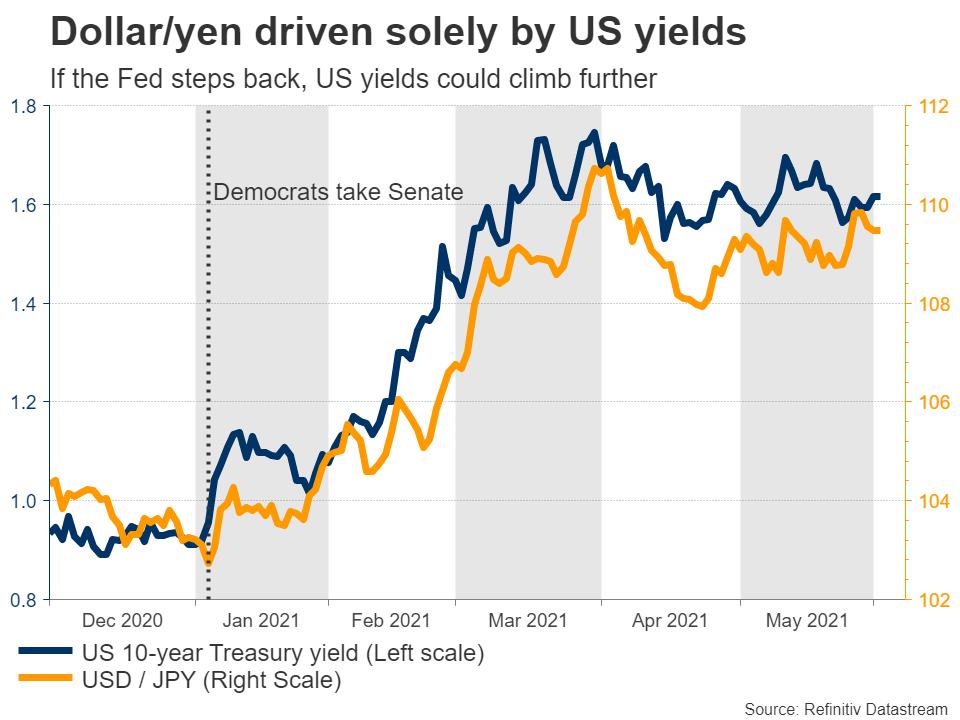 That could narrow yield differentials once again in the yen's favor, and also boost the currency through the risk sentiment channel. The yen is a safe-haven after all.

Ultimately though, it's doubtful even this would last long. An episode of panic might be enough to revive the yen for a brief period, but not enough to turn the entire ship around. In a world where the global economy continues to heal its wounds, the yen will likely fall behind.

In a trading context, it might fall the most behind against the likes of sterling, the Canadian and New Zealand dollars, and even the US dollar, as those currencies enjoy a boost from rising yields.

Taking a technical look at dollar/yen, initial resistance to advances may be found near the 110.20 zone, a break of which could open the door for the March highs around 110.95.

On the downside, preliminary support to any declines could come from the 108.55 region. If the bears pierce below that, their next target might be the 107.45 low.