Preliminary PMI data out of the Eurozone will hit the markets on Friday at 09:00 GMT. Forecasts point to a mild decline in both the manufacturing and services indices, as concerns around the virus damage in China may have started to infect European business sentiment. As for the devastated euro, it’s difficult to see what can turn its fortunes around outside of a big fiscal spending package, which is not on the horizon.

When the levee breaks

The past few weeks have been brutal for the single currency, as a disappointing run of data poured cold water on hopes for a real recovery in the growth-starved euro area. Concerns about the virus in China only added fuel to these concerns, as the Eurozone – and especially German manufacturers – rely on China to absorb their exports. Hence, a severe hit to Chinese growth could translate into further weakness for the Eurozone.

The real risk for Europe is that if such a shock truly pushes growth lower, or worse yet pushes the economy into a recession, there’s little the local authorities can do. Monetary policy is already exhausted after years of sub-zero interest rates and heavy money printing, so it’s doubtful how effective any more stimulus by the European Central Bank (ECB) would be. 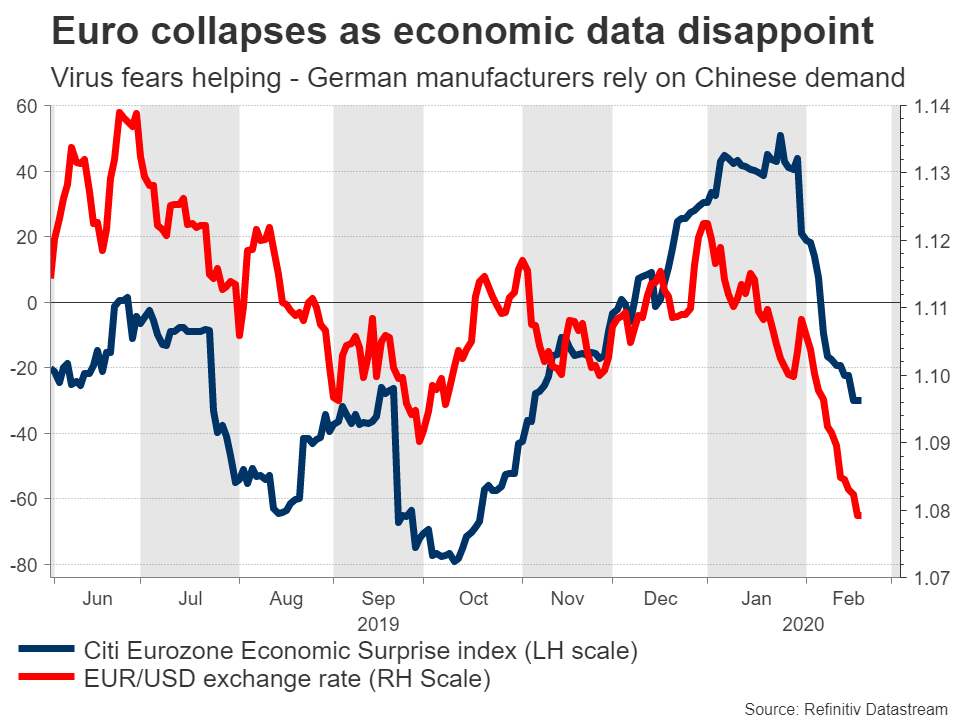 Similarly, fiscal room is limited in all major economies outside of Germany, and Berlin has been adamant it doesn’t intend to open the spending taps anytime soon. Earlier this week, the finance ministers of the Eurozone agreed that governments should spend more to support their economies, but only if a downturn hits. In other words, the situation probably needs to get even worse before any meaningful spending package to boost growth is considered.

This week’s PMI surveys will reveal how much of an impact the virus outbreak had on European business sentiment. Both the manufacturing and services PMIs are expected to have declined in February, albeit only modestly. Investors might focus mainly on the manufacturing index, since that’s where any virus damage is most likely to show up.

If anything, the risks might be tilted towards a bigger-than-expected decline in the manufacturing print, as the collapse of demand in China amid mass quarantines may have already translated into a sharp drop in new orders for European goods. Indeed, Germany’s ZEW survey for February was much weaker than forecasts suggested, revealing stress among financial experts that may also be reflected among business executives. 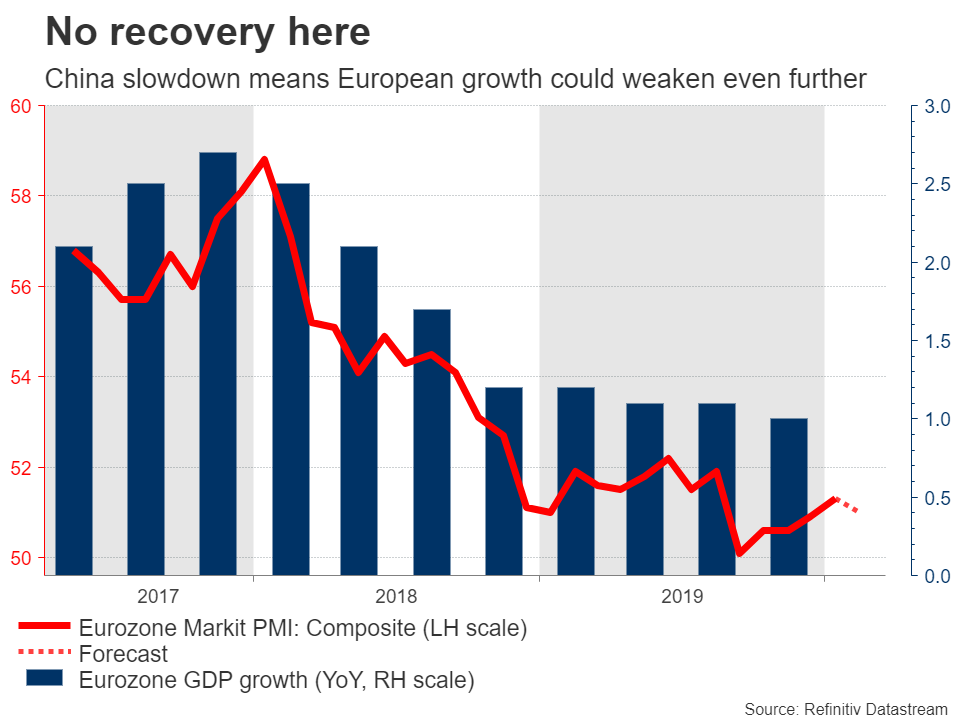 Note that the French and German figures will be released earlier, at 08:15 GMT and 08:30 GMT respectively, and any market reaction could begin with them.

No light at the end of the tunnel

Overall, the outlook for the euro is still clouded. The Eurozone is barely growing and is much more exposed to China via exports than the US economy is, meaning that Europe would probably suffer more than America if Chinese growth takes a severe hit. Meanwhile, the ECB can’t do much more to support the economy, and it seems that a recession must be on the horizon before governments finally decide to spend more.

Until – and if – markets get strong signals that a big spending package is on the way to boost growth, there’s not much that can stop the euro’s epic downfall against the dollar. Adding credence to this view, while euro/dollar has collapsed already, speculative positioning on the euro is far from extreme short, so there’s room for further declines as more leveraged funds come aboard the euro pain train.

That said, a word of caution too: when a currency pair falls as violently as euro/dollar did recently, it doesn’t take much for a sharp rebound to occur. Any piece of positive news for the euro, or negative news for the dollar, could trigger a larger-than-usual spike higher as many traders take profits on the prior short positions.

In short, while the trend is definitely lower, beware of big corrective retracements.

On the flipside, if the pair reverses higher, initial resistance may be found near 1.0840.