New Zealand will publish quarterly retail sales figures on Tuesday (Monday, 21:45 GMT). Following the Reserve Bank of New Zealand’s surprise decision to keep monetary policy unchanged at its last meeting, the data will be watched for clues as to whether additional rate cuts are likely in the near term. While the unexpected policy move has buoyed the local dollar, any weakness in the incoming data could hinder the kiwi’s tepid recovery.

Q3 retail sales to bounce back

After a sluggish second quarter, retail sales in New Zealand are expected to have bounced back in the three months to September, rising by 1.2% over the quarter, accelerating from the prior 0.2%. If the report falls in line with analysts’ forecasts, it would reinforce the RBNZ’s decision at its November meeting to hold the official cash rate (OCR) unchanged at 1.0%. 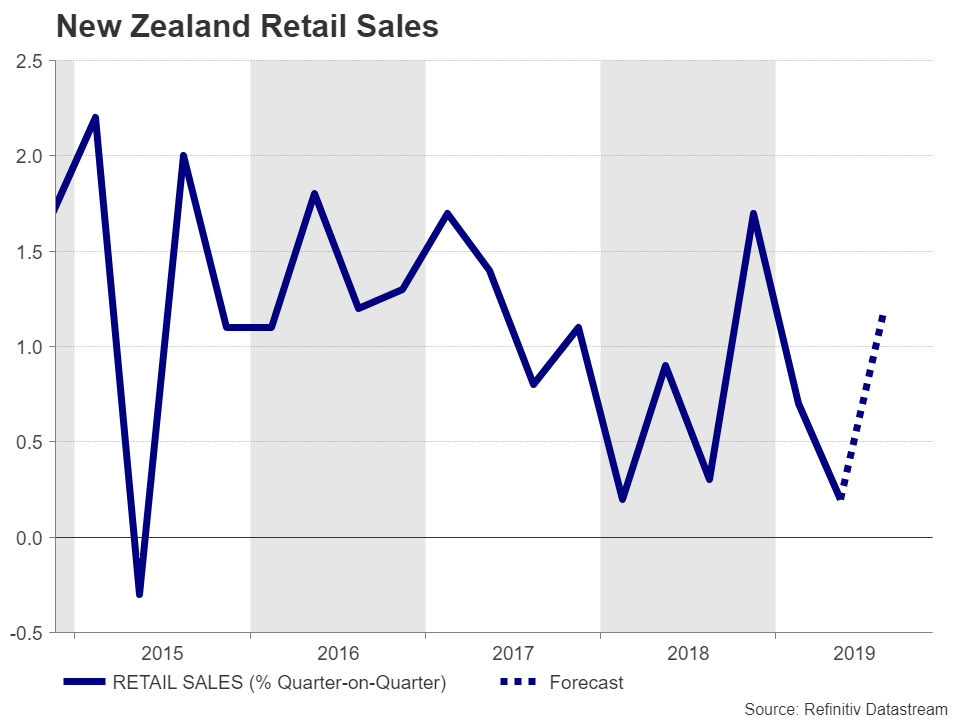 In November, policymakers cited signs that the recent stimulus was “flowing through the economy” in their decision to forego a rate cut. But although the decision was a close call and the Bank clearly indicated that the risks remain tilted to the downside, there are several factors at play that could lessen the case for further rate cuts.

First is the 75-basis points reduction in the OCR already made this year that has taken borrowing costs to historical lows and is supportive of higher consumption and investment. Another source of stimulus for the economy is the fiscal boost from the government’s spending increases announced in May. Moreover, the recent easing in trade tensions has slightly brightened the outlook for global growth, and a sustained truce in the US-China trade conflict is likely to be positive for New Zealand’s export-driven economy.

All these suggest another RBNZ rate reduction is far from a done deal in the coming months and explain why the New Zealand dollar has been on a steady uptrend since early October, in contrast to the aussie dollar, which has reversed back down again.

However, is it too early to call an end to the latest easing cycle? The answer is most probably yes. The unpredictable nature of the Trump administration means trade tensions could flare up at any moment and even if a ‘phase one’ deal is signed, the chances of a ‘phase two’ accord that would involve a more comprehensive agreement, including a significant rollback of existing tariffs, seem remote at this stage.

It’s also unclear whether the New Zealand economy is out of the woods just yet. Business confidence has yet to bounce back convincingly. The ANZ business outlook survey for November due on Thursday at 00:00 GMT should shed more light on whether businesses are reaping the benefits of lower rates. Business sentiment in New Zealand has failed to recover from the post-2017 election slump when investors panicked at the prospect of a Labour-led government.

Last but not least, the latest quarterly employment data showed slack in the labour market increased in the third quarter. The RBNZ has a dual mandate of targeting both inflation and employment so it pays as much attention to the jobs numbers as it does to price gauges. Hence, given the underlying weaknesses still present in the economy, the RBNZ’s next move is more likely to be down than up.

If the upcoming data tips the balance more in favour of another rate cut, the kiwi will be unable to break past immediate resistance at around $0.6426, which is the 38.2% Fibonacci retracement of the July-October downtrend. Failure to clear this hurdle would bring an end to the latest upswing and push the kiwi back towards its 50-day moving average just above the 23.6% Fibonacci at $0.6340. A drop below this key support would bring into range October’s 10-year low of $0.6201.

However, a positive retail sales report could be the boost the kiwi needs to overcome the $0.6426 resistance area and aim for the 50% Fibonacci, which sits close to the $0.65 handle.