Will Tesla earnings live up to the hype as stock surges again? – Stock Market News

Tesla Inc. has been an unstoppable force in the electric vehicle (EV) market and lately it’s been taking over the stock market as well, as its share price has skyrocketed by around 275% this year. But as Tesla attracts huge interest from across the trading community about the potential of its electric car technology, can its second quarter earnings satisfy the bloated expectations? The Company is scheduled to announce its results on Wednesday after the market close.

Tesla sales not dented by lockdown

Investors have already had a taste of Tesla’s earnings for the June quarter as the Company reported its vehicle deliveries for the period earlier this month. Tesla delivered 90,650 vehicles, smashing Wall Street estimates. The figure is even more impressive when considering that its sole production plant in the United States was shut down during the lockdowns and consumption has been subdued during the pandemic.

Still, the trend for green technology and the growing popularity of EVs has helped Tesla ride out the virus storm better than other car manufacturers. So much so that Tesla has now overtaken Japan’s Toyota to become the world’s most valuable carmaker, with market capitalization reaching $300 billion, even though its sales are a fraction of Toyota’s.

But will the bulls have reason to celebrate on Wednesday? Looking at the earnings estimates, the answer is probably not. Q2 revenue is expected to have fallen by 8.1% year-on-year to $5.84 billion according to I/B/E/S Estimates by Refinitiv, though earnings per share (EPS) are forecast to have jumped to 90 cents from a loss of $1.12 a year ago. 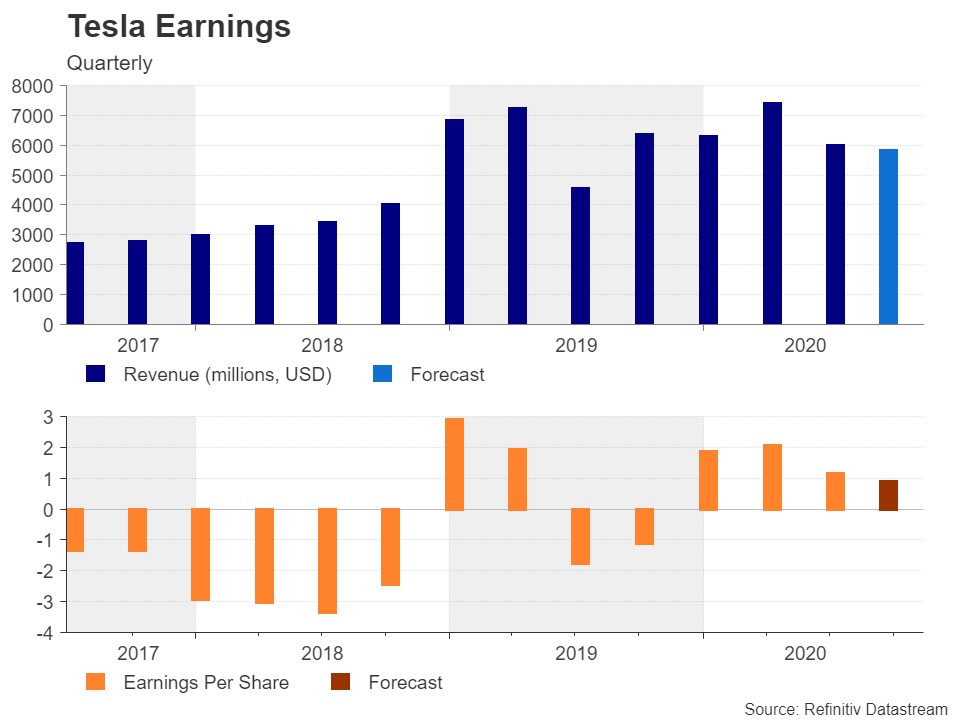 In the event of a negative correction for the stock, the 161.8% Fibonacci of $1,351.21 would be the first call for the sellers before pushing the price down to the 50-day moving average around $1,055.

Can Tesla pull a surprise profit?

Investors will also be keeping an eye on net income for a possible profit for the quarter amid talk of the Company soon joining the ranks of the S&P 500. The prospect of Tesla shares being included in the benchmark S&P 500 Composite is likely contributing to the stock’s rally. But to become eligible, Tesla needs to report four straight quarters of profit. Judging by the estimates, that may not happen just yet as analysts are forecasting a net loss of $113.54 million for Q2.

Another weak spot for Tesla is that it is frequently running a negative cash flow as it’s constantly investing in new technology and production facilities. But that could be about to change. At the recent conference call for Q2 sales, Tesla CEO Elon Musk said the firm “is now at the point of being self-funding”.

A positive free cash flow and net income could be what it takes to propel the stock even higher. But how far can the rally go at current valuations. The mean recommendation by analysts is still ‘hold’, with the median price target of $782.50 well below that of the market price. 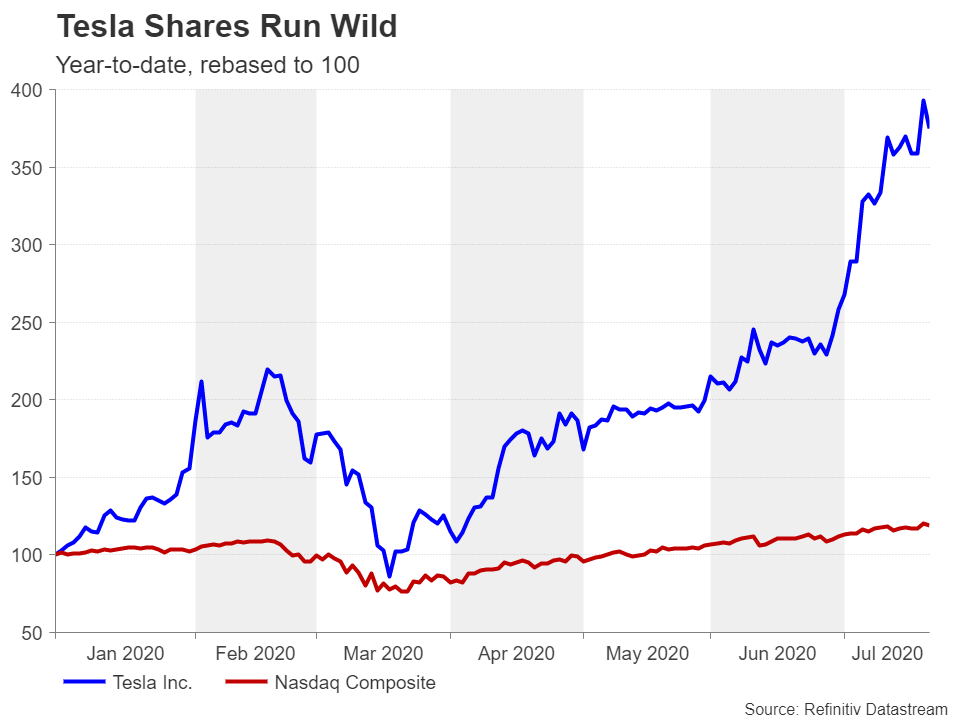 If that’s not a sign of an overvalued stock then maybe the price/earnings ratio (P/E) of 406.8 (as of July 21) versus an average of 31.47 for the Nasdaq Composite might convince traders that market valuations are disconnected from fundamentals. The 12-month forward P/E multiple is a little less excessive at 164.5 but this is still sharply above the industry average of 13.1.

So what’s behind this incredible rally in Tesla shares? Many are attributing the boom in Tesla and other tech shares to the surge in retail investors since the lockdowns. And Tesla stands out because of how it’s revolutionising the EV industry.

The Company is set to make a major announcement on new EV battery technology on September 22 and Musk recently hinted that full self-driving cars are ‘very close’. Thus, many investors clearly think Tesla is at the forefront of the changes transforming the car industry and currently has no rival that comes close to matching its technology.

Nevertheless, the Company’s guidance for the next quarter as well as its full year sales target will be very important in the conference call and some heavy profit taking cannot be ruled out if they disappoint.