Will the Fed be less dovish than markets expect? – Forex News Preview

The Fed will announce its policy decision on Wednesday, at 1900 GMT. Markets seem positioned for a “dovish hike”, where the Fed raises rates but lowers its rate-path forecasts and strikes a cautious tone. However, considering just how dovish market pricing for 2019 is, the risks surrounding the dollar seem to be asymmetric, and skewed to the upside.

In the past few weeks, investors have meaningfully pared back their bets for Fed rate hikes in 2019. Yet, the implied probability for a rate increase at this meeting has remained relatively stable, at around 65-70% according to the Fed funds futures. Markets seems to have adopted the view that although the US economy is still healthy, allowing policymakers to raise rates for now, some “cracks” are beginning to show in key sectors like housing, which are set to spill over into slower growth in the rest of the economy next year. Thus, the logic goes, the Fed will probably pause its tightening cycle soon, in the face of a slowing economy.

In this context, the central bank is broadly expected by analysts to deliver a “dovish hike” this week, where it raises interest rates but signals increased caution about future hikes, and revises lower its rate projections for 2019 to signal just two regular hikes, from three currently. In fact, looking at market pricing, it’s much more dovish than that; investors assign just a 30% probability for a single rate increase in the whole of next year, assuming one is delivered now. 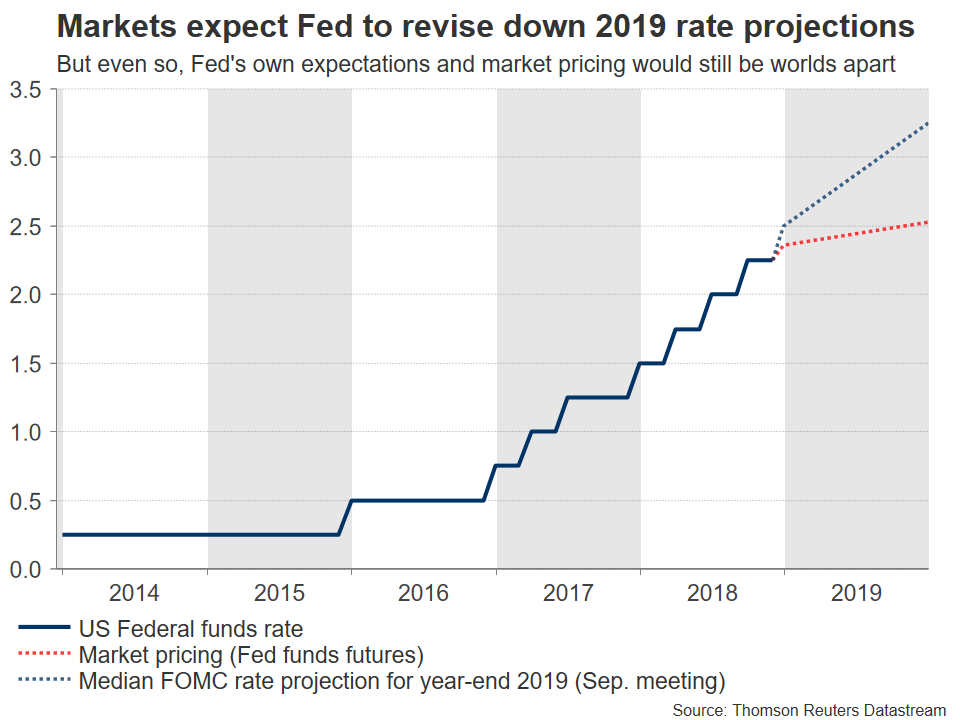 This repricing was owed mainly to speeches by Fed Chair Powell and Vice Chair Clarida, which were interpreted as having a dovish tilt. Alas, their cautiousness may have been exaggerated, as neither official implied the Fed is ready to hit the pause button. More importantly, recent US economic data remain healthy, hardly warranting a pause. The unemployment rate at 3.7% is below estimates of full employment, wages growth is at cycle highs, inflation continues to hover near 2.0%, forward-looking surveys like the ISM PMIs remain at robust levels, and the Atlanta Fed GDPNow model forecasts Q4 GDP at a strong 3.0%.

In other words, markets may have gotten ahead of themselves in pricing out such a substantial degree of Fed tightening so quickly, and with little concrete evidence a pause is indeed imminent. The quality of recent data simply doesn’t support a pricing this dovish. That doesn’t go to say the Fed won’t revise down its rate projections – it very well might, as all it would take for the “median” projection to be lowered to signal two hikes in 2019 is just one official marking their forecast down. However, even in that case, the Fed’s 2019 view and that of the market would still be worlds apart, so it wouldn’t be a surprise to see Chair Powell push back by reaffirming the Committee’s determination to raise rates further, in an attempt to bring market pricing closer to the Fed’s. Not doing so runs the risk of having to tighten faster than what is baked into asset prices, shocking markets and perhaps the economy in the process.

In terms of the market reaction, the risks surrounding the dollar from this meeting may be asymmetric and skewed to the upside. Given how dovish market pricing is, a downward revision in the Fed’s rate forecasts won’t be much of a surprise, and hence is unlikely to generate a major reaction, with any losses in the greenback being fairly limited. Looking at dollar/yen technically, immediate support to declines could be found around the December lows of 112.20, with a downside break opening the way for a test of 111.35, the October 26 trough.

On the other hand, if the projections are kept unchanged or Powell seems unusually confident, it would come as a surprise – and the dollar could therefore soar higher. Initial resistance to advances in dollar/yen may come near the 50-day simple moving average, currently at 112.98. Even higher, the December 13 peak at 113.70 would attract attention, before the 114.15 area comes into view.

Summarizing, investors seem to anticipate an overly dovish Fed, and while the Committee is indeed likely to appear more cautious, it’s unlikely to go as far as signal the broader pause in rate hikes that market pricing currently implies, consequently generating an upside risk for the dollar.