The European Central Bank (ECB) will announce its policy decision at 12:45 GMT on Thursday and even though markets have fully priced in a 10 basis-points rate cut, economists disagree. Indeed, with the central bank nearly out of ammunition and policymakers divided, the ECB may only introduce targeted lending measures and ramp up its QE programme, not cut rates. If so, euro/dollar may spike higher. In the bigger picture though, it’s becoming difficult to envision a sustained rally from here.

With central banks around the world slashing rates aggressively to shield their economies from the impact of the coronavirus, markets are confident the ECB will follow suit and cut rates deeper into negative territory. Even though the struggling euro area economy could certainly use some more stimulus, the ECB might not oblige markets with a rate cut, at least not right now.

For starters, slightly lower interest rates are not going to fix broken supply chains, and even the boost to demand becomes questionable in a situation where consumers are scared enough to cut their spending on things like travel and entertainment activities. In other words, monetary policy is the wrong tool for addressing a shock like this virus.

What rate cuts can help with is restoring calmness in financial markets and that’s mainly why the Fed alongside the central banks of England and Canada have all cut rates. However, it’s a different story in the Eurozone. 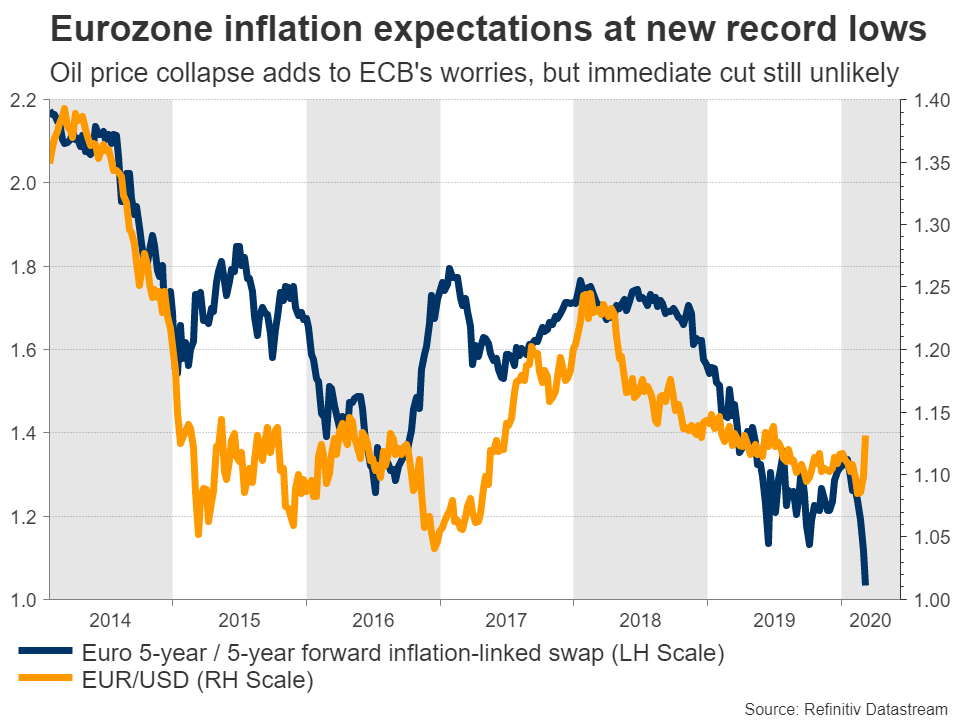 Unlike the US and Canada, European interest rates are deep in negative territory already, so ‘slightly more of the same’ won’t do much to boost the economy and the ECB would be using its final rate bullets on a crisis that monetary policy can’t help much with. Additionally, there’s no real appetite for more stimulus within the ECB either. Several policymakers – especially those representing France and Germany – feel that lower rates might even be counter-productive by hurting the bloc’s stressed banking sector.

It’s also telling that the G7 statement last week did not suggest a consensus for an immediate policy response, and yet the US and Canadian central banks immediately slashed rates. This implies that the Europeans weren’t on board.

Instead of cutting rates, the ECB could announce some operations to provide liquidity to small and medium sized businesses that have been impacted by the virus, helping those that have seen their supply lines cut or their cash flows dry up by giving them very cheap loans. It could also help bigger businesses by temporarily increasing its purchases of corporate bonds via its QE programme.

This is arguably the best strategy available given that the ECB is divided and low on policy bullets. It won’t truly boost market confidence, but it does put a ‘bandage’ on the wound until better policy responses are formulated.

ECB could lift euro, but for how long?

Turning to the market reaction, what really matters for the euro is whether rates will be cut. Hence, if they aren’t, the single currency could spike higher on the decision, extending the impressive gains it posted in recent weeks. However, in the bigger picture, it’s becoming increasingly difficult to envision a sustained rally in euro/dollar from here. 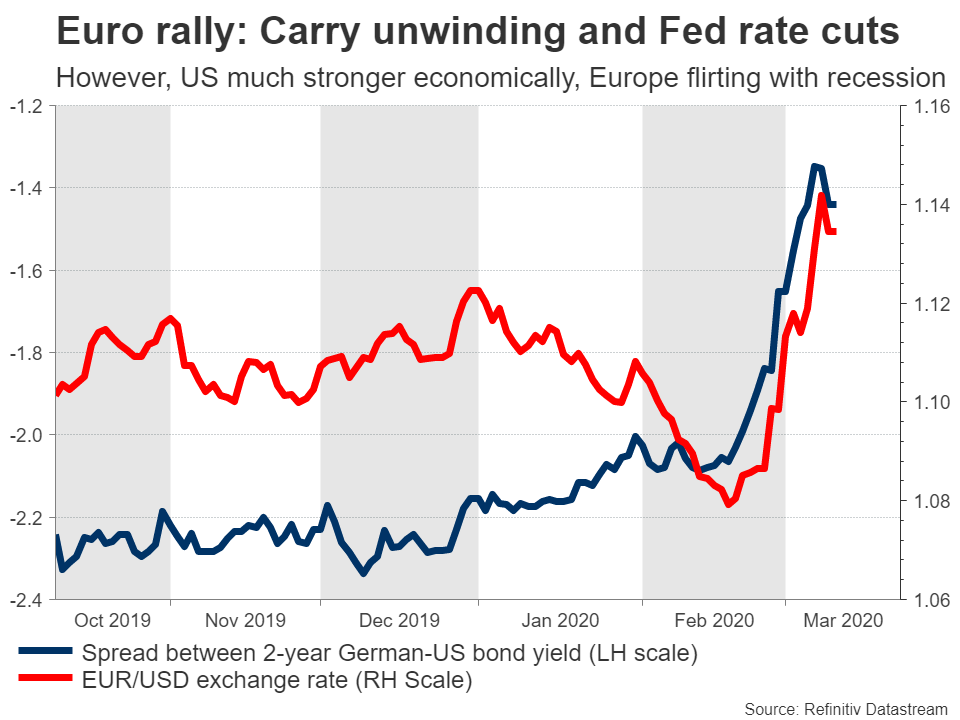 The latest gains in euro/dollar haven’t come because the Eurozone economy is improving but rather because 1) several carry trades were unwound as risk appetite soured, bringing money back to the Eurozone and 2) because the Fed cut rates aggressively, eroding the dollar’s rate advantage.

Yet, consider this: the US economy was already much stronger than the Eurozone before the virus outbreak, and US authorities are getting ahead of this risk by adding powerful stimulus to shield their economy. The Europeans aren’t, and with Italy likely to enter a recession soon, the entire bloc could follow. In other words, the US economy could weather this shock much better.

Finally, even though the greenback has behaved like a ‘risk on’ currency lately, falling amid heightened risk aversion as carry trades were unwound, that might not continue indefinitely. At some point, this unwinding process may run its course, allowing the dollar to act like a safe haven again.

Looking at euro/dollar technically, initial resistance to advances may be found near 1.1450, which was also the top of March 2019. Even higher, the bulls might struggle at 1.1490.

On the downside, if the ECB does cut rates, the bears would probably aim for 1.1275 first, before turning their sights to the 1.1240 area.