Will the SNB use its rate weapon to fight the coronavirus? – Forex News Preview

The Swiss National Bank (SNB) has a scheduled meeting on Thursday at 08:30 GMT and is expected to unleash its own stimulus package in response to the rapid spread of COVID-19 in Europe that has so far affected more than 2,000 people in Switzerland. While a rate cut is almost fully priced in by the markets, the SNB like its European counterpart may choose a different path to boost the economy.

Another rate cut would not make much of a difference

Last week the European Central Bank (ECB) left interest rates unchanged in negative territory and widened its net asset purchase program by 120 billion euros towards the private sector, which is equivalent to a 13.30 billion euros increase from the current 20 billion monthly purchases. Besides that, it will offer loans at a favorable rate and relax collateral requirements to the banks to further boost liquidity.

The above measures reflect that the ECB is doubtful about the impact a rate cut could have on the economy, especially if rates are already in the negative area. Besides, it has been almost six years since the ECB started to push its deposit rate below zero, but it has yet to reach its primary objective of a below but close to 2% inflation within the euro area. So, another reduction would not make much of a difference.

Similarly, the SNB has been struggling to achieve its inflation mandate too and it even faced the risk of deflation recently although its policy rate has been deeper in the negative area and the lowest in the world. Keeping its currency relatively competitive has been another headache for the central bank given franc’s safe-haven appeal. The period following the removal of the peg in 2015 which was previously capping the franc’s appreciation, saw the currency losing ground as policymakers desired, mainly due to rate increases by other key central banks such as the Fed.  However, in mid-2018, the escalation in the US-China trade war, Brexit and rising fears of recession shifted funds towards the swissie, putting the currency back on the appreciation course. 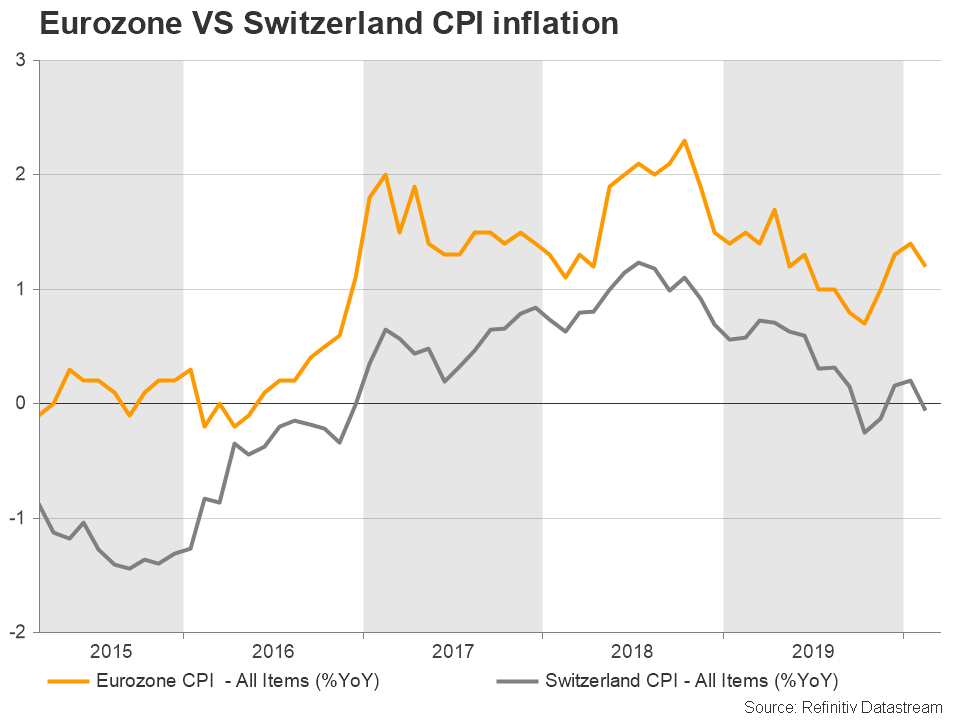 SNB turns to old habits thanks to the virus crisis

Now the coronavirus outbreak and looser monetary policy by other major central banks is further boosting the swissie, squeezing the gap in interest rates and therefore the spread of government bond yields. That said, while such conditions are pressuring the SNB to slash its borrowing costs, it may not to do so at Thursday’s meeting as it seems to have found a more effective way to weaken the franc by falling back to its old habit of FX intervention. The supportive package of $10.5 billion the ruling government offered this week is also taking some pressure off the SNB to proceed with further loosening. 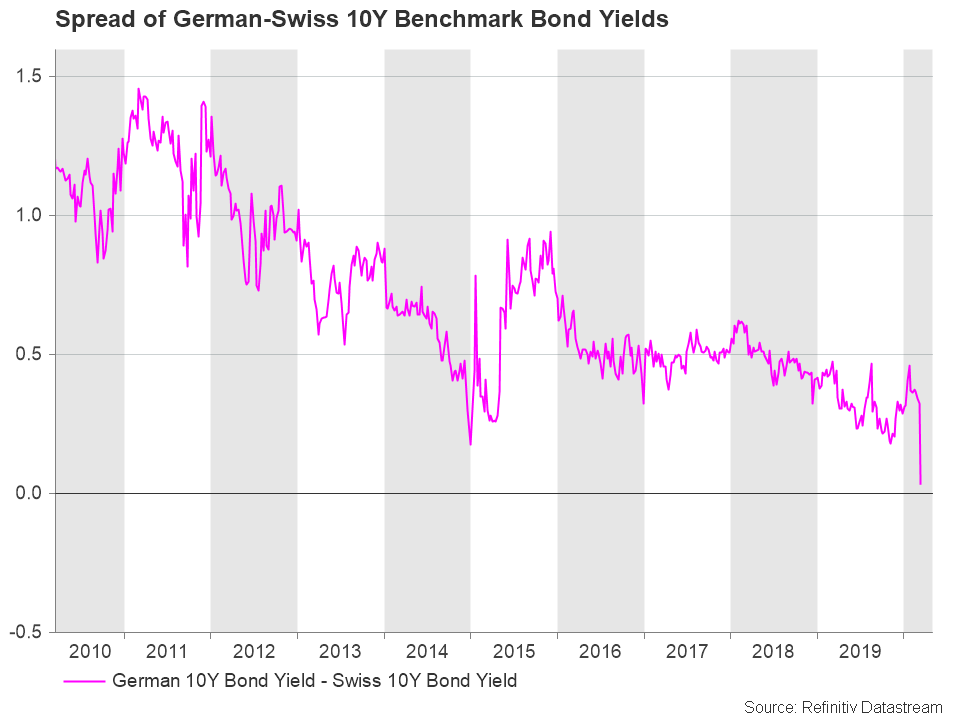 Particularly, sight deposits at the SNB, which is a proxy for currency intervention, have been on the rise since the start of the year though significant increases have only been detected this month, suggesting that the Bank is trying to keep the franc from appreciating by selling francs in exchange of euros. Moreover, the increase in sight deposits emerged when EURCHF closed below 1.06 and after the spread between the German and the Swiss 10-year government bond yields moved closer to zero, while the low volatility in EUR/CHF is also hinting that someone is stabilizing the market. 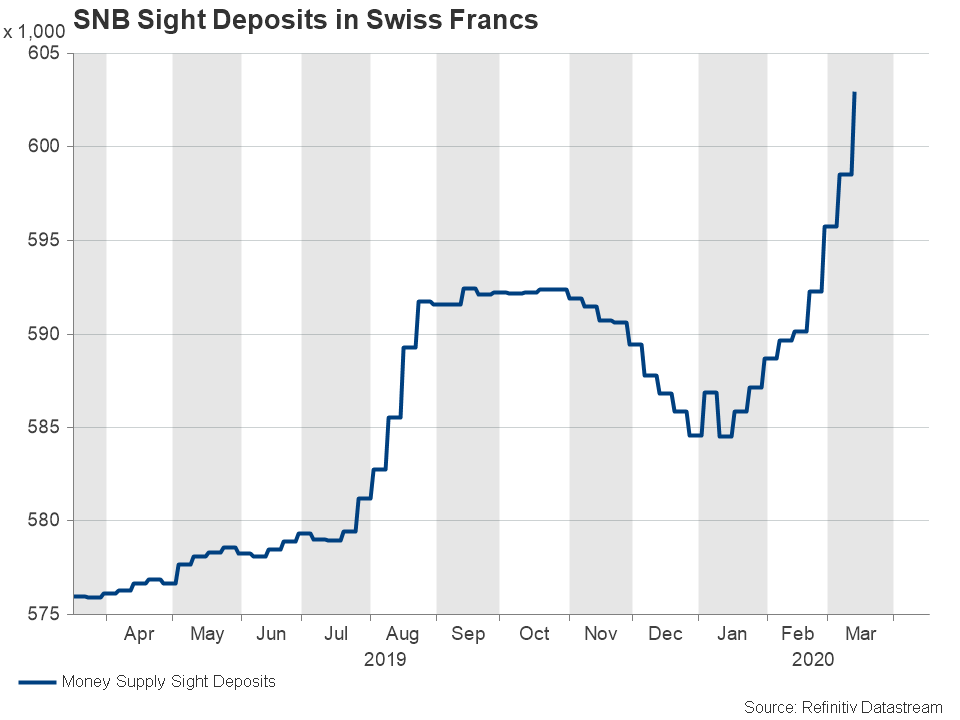 Currently markets put a 90% probability of a 25-bps rate cut to -1.0% but pushing borrowing costs below record lows may not significantly aid the economy. Besides, if the bank was rushing to slash rates, it would have called an emergency meeting like its EU and US counterparts did earlier this month. Hence, policymakers in response to the ECB’s neutral response on rates could follow suit by leaving rates steady and announcing other measures that will help banks keep lending to the economy while continuing the FX intervention. Note that no press conference is scheduled at this policy meeting.

How markets could react?

Regarding market reaction, the muted volatility in EUR/CHF is likely to remain in place as long as the SNB keeps buying euros in order to make exports towards the EU, which is the largest trade partner to Switzerland, more attractive. Therefore, the focus will shift to other swissie pairs.

Looking at USD/CHF, it staged a remarkable rally after failing to breach the 2018 low of 0.9186. Should the central bank use other tools besides interest rates to stimulate the real economy, disappointing those who priced in a 25-bps rate cut, the pair could erase some previous gains, likely pulling back to the 0.9445-0.9400 support area.  Lower, the 0.9320 level barrier could also attract attention if the sell-off continues.

On the other hand, if the SNB judges that its intervention may not be enough to curb stronger demand for the safe haven swissie in the coming months, it may decide to move now, leaving little ammunition for the future. In this case, the swissie could experience temporary downside pressure, leading USDCHF above the 0.9650 resistance and up to 0.9700. Slightly higher the 0.9760 mark could next come into focus if the rally accelerates.