Top American and Chinese negotiators will face off in another round of trade talks on Thursday. Will the two sides reach a ‘limited’ trade deal, where Beijing buys agricultural US products in exchange for Washington postponing its planned tariff hikes? It’s a close call, but a failure to reach such a deal could leave markets disappointed and spark another bout of risk aversion.

The stakes are especially high heading into this negotiating round, as the US is scheduled to raise its tariffs against China on October 15, unless something is agreed. Investors are optimistic that a ‘mini’ deal may be struck, with China buying agricultural US goods in return for President Trump cancelling his upcoming tariffs.

Market expectations for such a breakthrough were tempered lately, following reports that Beijing isn’t willing to even discuss reforming its industrial policy or the huge government subsidies it gives Chinese firms – a core issue for the US. While this is clearly a negative sign, the fact that markets reacted little to this story suggests investors are still hopeful of a small deal being done. Let’s examine the arguments for, and against.

In the US, the manufacturing sector is already on its knees amidst the trade war, with the latest ISM survey showing the sector contracting as export orders took a massive hit. This weakness is starting to infect the services sector as well, so without any de-escalation, it may be a matter of time before the entire economy becomes ‘sick’.

From Trump’s perspective, allowing the economy to weaken further ahead of next year’s presidential election doesn’t help his reelection chances. Similarly, one of his main pillars of support are US farmers, so getting China to buy agricultural products helps him score political points too.

The arguments are similar on the Chinese side. Growth has slowed considerably, despite substantial stimulus measures to cushion the economy. Any further tariffs would clearly make a bad situation worse. 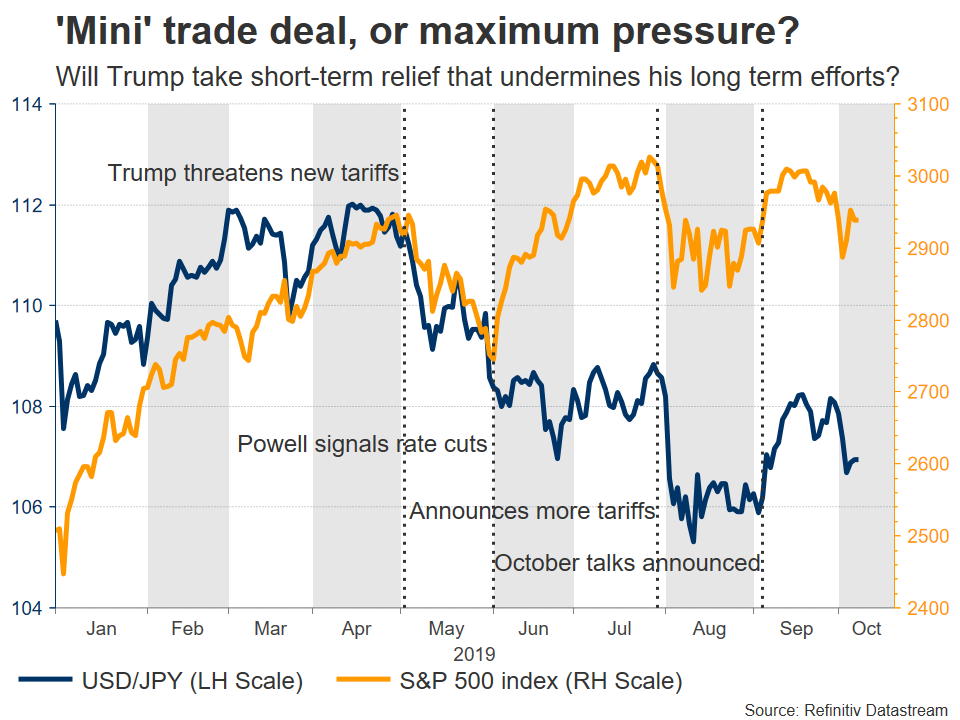 Adding stimulus though, is a huge gamble for an economy as leveraged as China. While more stimulus may keep growth supported for now, it also amplifies financial stability risks, threatening the economy’s long-term health. Hence, this is a game the Chinese leaders don’t want to play for very long either.

Of course, there are serious arguments against a truce too. Firstly, striking an interim deal would completely negate the “maximum pressure” negotiating approach Trump has pursued so far. It would give China some valuable breathing space, and therefore reduce the chances of reaching a ‘real’ deal anytime soon – something that veteran US negotiators like Lighthizer no doubt know. So the question is, will Trump choose short-term economic relief that undermines his longer-term efforts?

Equally, China may prefer to take the economic pain rather than give Trump a ‘victory’ he can present to US voters, in fear that this would boost his reelection chances. Beijing may have also seen the impeachment process as weakening Trump’s hand.

Weighing everything together, no-deal seems more likely than a deal, although it’s a close call. Trump has shown he doesn’t like to relent pressure, and his rhetoric hasn’t cooled down either. Separately, by taking subsidies off the negotiating table, China is signaling it won’t compromise on the big issues, which may not sit well with Trump.

That said, everything could boil down to how much agricultural products China offers to buy, for how long, and what it asks in return.

In the markets, a failure to strike a deal would likely trigger another wave of risk aversion, sending stocks lower alongside the dollar, as investors price in more Fed rate cuts. Risk-sensitive currencies like the aussie and kiwi could also lose out, while haven assets like the Japanese yen and gold may be the biggest beneficiaries.

On the contrary, a potential deal may spark the opposite reactions, boosting risky assets and hurting safe havens.

Taking a technical look at dollar/yen, a no-deal outcome could see the pair pierce below 106.50 to test the 105.0 region.

On the flipside, a recovery may see the bulls stall near the 108.45 area initially.