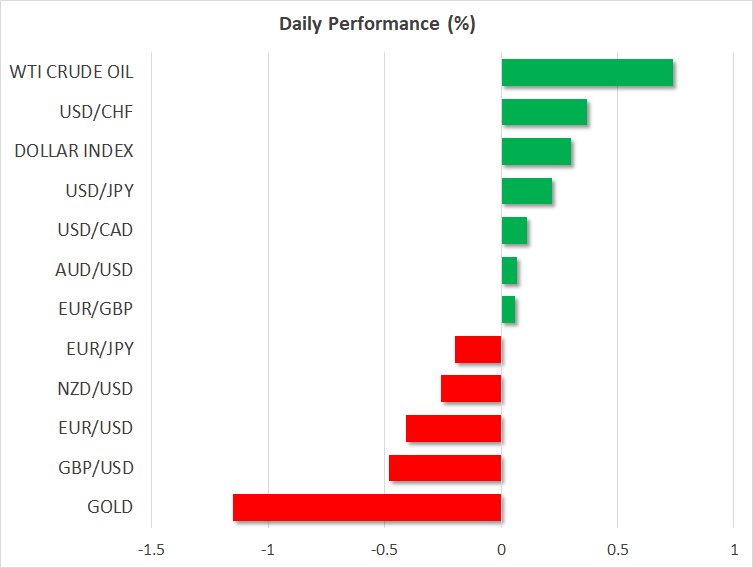 Rising optimism about the US economic outlook lifted the greenback to a fresh 2-month top on Thursday as investors bet that the American economy will outperform on the back of the Biden administration’s pledge for big spending and bringing the pandemic under control. While President Biden continues to hold out for a bipartisan deal on his virus relief proposal, offering to limit the $1,400 stimulus checks to lower income earners, Democrats are not taking any chances in case the talks break down.

The Democrats went ahead with approving a budget resolution in the House of Representatives on Wednesday that would pave the way for Biden’s $1.9 trillion package to be passed without Republican support in the Senate. Thus, even without Republican backing, it’s looking increasingly certain there will be new virus aid measures in place by mid-March before many of the existing benefits expire.

Positive sentiment for the US economy is also being supported by falling Covid cases and deaths, as well as an acceleration in the country’s vaccination programme. The optimism is pushing long-dated Treasury yields higher, with the 10-year yield reaching 1.15% today and the 30-year yield climbing to the highest since March 2020.

Dovish remarks by Fed policymakers have been unable to put a lid on the recent jump in yields. Chicago Fed President Charles Evans yesterday hinted the Fed would not have a problem with letting inflation rise to 3%. But such talk only seems to be aggravating inflation expectations, pressuring bond prices even further.

The US dollar was last trading 0.2% firmer against a basket of currencies, posting solid gains against the yen, euro and pound.

The upbeat mood appeared to come under question in equity markets after Wall Street could only manage to close flat on Wednesday and Asian stocks ended today’s session sharply down.

The S&P 500 and Nasdaq Composite were dragged lower by a 2% slump in Amazon stock even as Alphabet shares surged by 7.3%. Traders did not react positively to Jeff Bezos’s announcement that he will be stepping down as CEO of Amazon. But there might have been other factors too.

The possibility that eligibility for the third round of stimulus payments could be narrowed down might be prompting some investors to scale down their expectations of a massive boost to consumption. Meanwhile, fears of tighter trading regulation could also be creeping in as Treasury Secretary Janet Yellen will be meeting with financial regulators today to discuss the recent trading frenzy with Reddit stocks.

In China, it was worries of liquidity drying up ahead of the long Lunar New Year holiday that pushed stocks in the region to negative territory as overnight rates spiked again, forcing the People’s Bank of China to conduct more reverse repo operations.

However, things had calmed by the European open with shares in London and the continent bouncing higher. US stock futures also edged upwards, though the Dow Jones was struggling.

Pound under pressure ahead of BoE, euro slips too

Sterling extended its weekly losses today, dropping below the $1.36 level to 2-week lows. The Bank of England is due to announce its latest policy decision at 12:00 GMT and will unveil the findings of its review into negative rates. Even if the Bank were to formally add negative rates to its toolbox, it’s unlikely it would ever use it, at least not anytime soon. So it could just be expectations that policymakers will come up with a pessimistic set of forecasts that’s pulling the pound lower.

The euro also breached a key level, falling below $1.20 for the first time since the beginning of December. Investors have become downbeat lately about the Eurozone’s ability to navigate itself out of the pandemic crisis. News that former ECB President Mario Draghi has been appointed to form Italy’s next government in the hope that a technocratic administration would end the country’s political impasse was unable to provide much of a lift to the single currency.

However, the main culprit for the pound’s and euro’s underperformance is likely to be the stronger US dollar. The commodity-linked dollars fared slightly better, with the aussie eking out modest gains. Oil prices were unfazed by the resurgent greenback, extending their bull run, but gold was not as lucky as the precious metal slumped to a 2-month low of $1,809.90/oz.