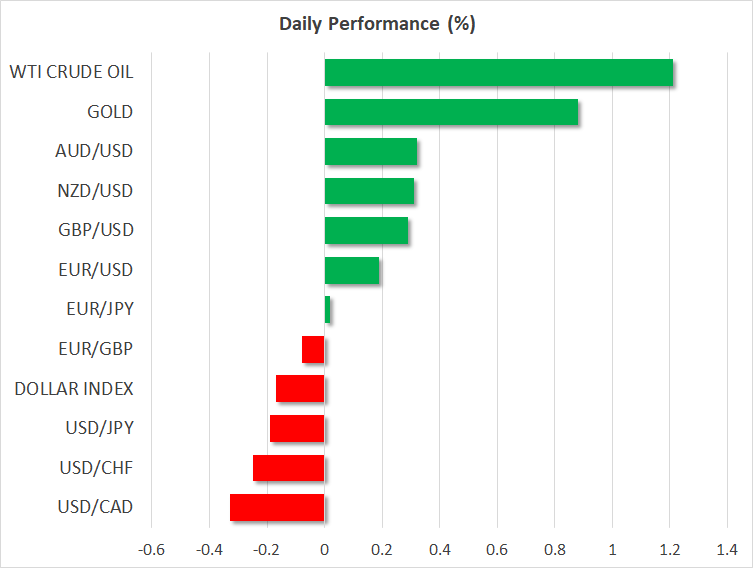 Progress in the global vaccination campaign and expectations of more easy money are powering world stock markets to fresh highs on hopes that a return to normality is nearing. A significant drop in new Covid infections in most parts of the world in recent weeks is further supporting the positive sentiment. Although many countries are still lagging behind in the vaccination race, the global rollout has nevertheless been large enough so that more people have now been immunized than infected by the virus.

Another driving force in the renewed optimism is the push by US Democrats to fast-track President Biden’s $1.9 trillion stimulus package through Congress. However, the proposed bill is already facing resistance not just by Republicans but also by moderate Democrats. The Senate on Thursday overwhelmingly voted to recommend blocking Biden’s planned increase in the minimum wage and exclude high-income earners from the $1,400 stimulus checks.

But even if the White House were to accept those recommendations, it might not be enough to win consensus as some Democrats want the new virus relief bill to be split into two so that funding for vaccinations is prioritized over the wider spending measures.

However, there seems to be little doubt in the markets that a large stimulus package is on the way, and the US yield curve continues to steepen on those expectations.

The rise in long-term borrowing costs does not appear to be causing much angst on Wall Street as the prevailing mood is still one of optimism, with a strong earnings season further underpinning the risk-on tone. The S&P 500 and Nasdaq Composite both closed at record highs on Thursday and their corresponding futures were indicating a positive finish to the week.

Fed officials have been out in droves lately to reinforce the central bank’s guidance that tapering is a long way away, yet all segments of the yield curve have steepened to multi-year highs this week, lifting the greenback.

The American economy is already in a stronger position than its rivals and the intensified effort by the Biden administration on the vaccination and stimulus fronts will likely push the US further ahead of the pack. That prospect is casting doubt on the deeply bearish views for the US dollar and January saw the currency’s safe-haven-like relationship with risk sentiment come to a halt.

The latest data out of the United States have been surprisingly robust, while European indicators have been dismal. However, the labour market has been a recent weak spot, though that may be about to change as well. Weekly jobless claims fell to the lowest since late November yesterday, and the private ADP employment survey also beat expectations. Subsequently, forecasts for today’s nonfarm payrolls report have been revised up and the dollar rally, which has paused for breath today, could fire up again if the numbers impress.

BoE says not yet to negative rates, pound likes it

Elsewhere in the currency markets, the pound bounced back sharply from its lows yesterday after the Bank of England signalled that negative rates are not imminently on the cards. The Bank kept policy unchanged as anticipated but gave the country’s financial institutions six months to prepare for negative rates in case such a move becomes necessary in the future.

However, investors have virtually priced out the possibility of negative rates in the UK after Governor Andrew Bailey predicted a strong recovery in the economy from the second quarter to pre-Covid levels.

Sterling was last re-testing the $1.37 level, but the firmer dollar was capping advances. The euro was also on a more positive footing, settling around $1.1975.

The Canadian dollar was among the top performers on Friday ahead of the country’s jobs report and on the back of rising oil prices. Both WTI and Brent crude have soared to one-year highs this week on signs that compliance to the output cuts remains high within the OPEC+ alliance and that the market is expected to stay in deficit for the rest of the year. 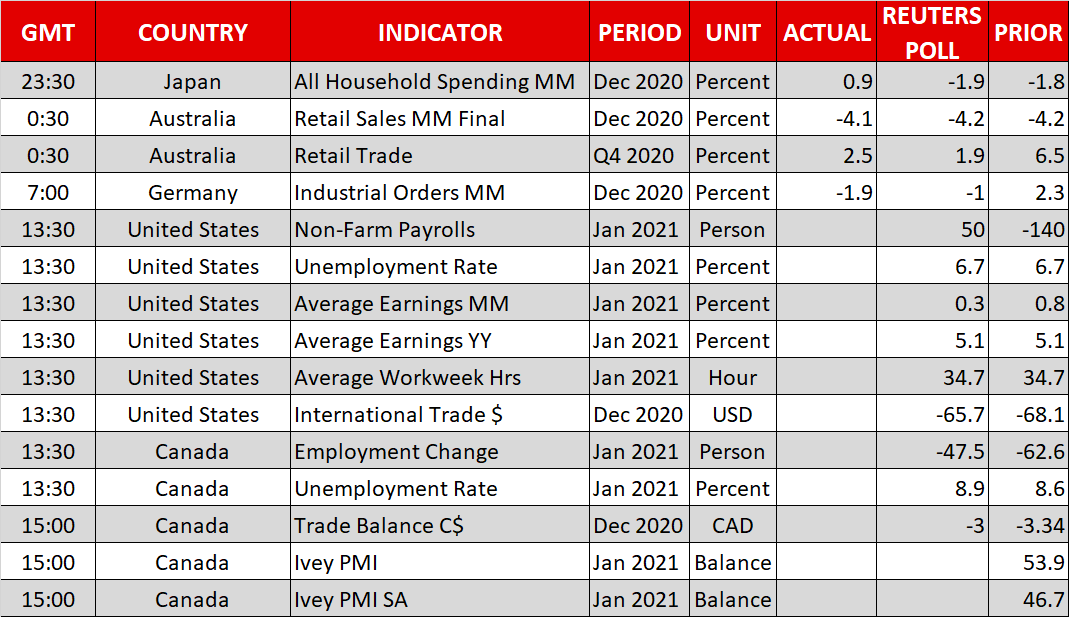