Microsoft is set to unveil its second fiscal quarter earnings results on Tuesday, January 25th, after Wall Street’s closing bell. The second most valuable publicly traded company is expected to record a solid, double-digit year-over-year growth. Despite its 2022 share price depreciation of almost 10%, the company has surged by almost 40% over the past year, outperforming the broader market.Microsoft’s story continues to be cloud

Digitalization trends and cloud adoption have been the major driving forces for the company’s revenue since the dawn of the pandemic. The ongoing transformation is only expected to pick up, with the cloud infrastructure market anticipated to touch $800 billion by 2030, according to Bloomberg. Therefore, the future outlook for Microsoft Cloud – Azure – is expected to remain bright. 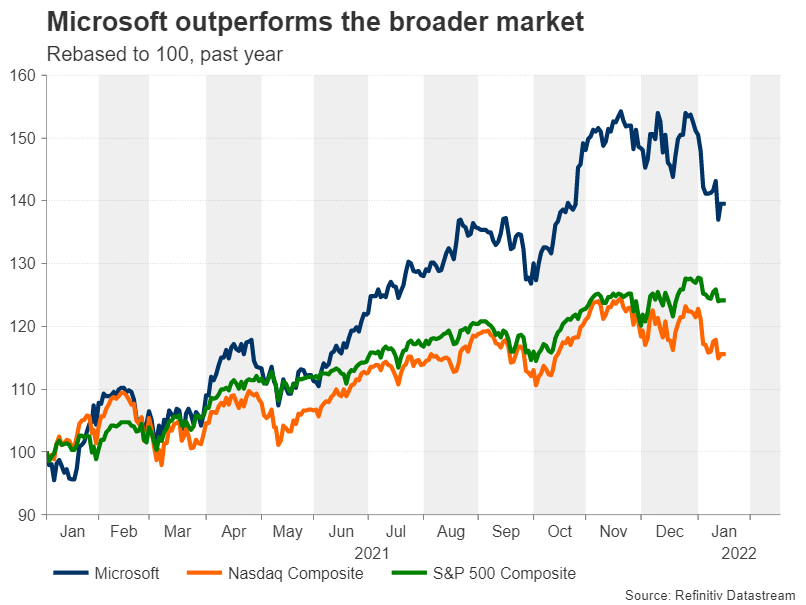 Unlike its competitors, Microsoft enjoys a sizable base of corporate clients that use its management solutions and productivity software. This provides a major competitive advantage as when clients migrate towards cloud, they will likely stick with the same provider, utilizing the product integration that Microsoft offers.

The software giant is currently trying to close its $19.7 billion acquisition of Nuance Communications, which is anticipated to increase the company’s addressable cloud-market in the healthcare sector. The acquisition could prove to be a major tailwind for the company, catalyzing future growth.

Focus shifts to the Metaverse

Microsoft is currently utilizing its financial firepower to invest in new products and acquisitions that will help the firm’s advancement towards the next generation of the internet. The company announced on Tuesday its biggest ever acquisition of Activision Blizzard in a $75 billion deal, reflecting management’s view that the path to the metaverse runs through the video gaming industry. The acquisition could turn Microsoft into one of the biggest creators of interactive entertainment, reshaping the gaming industry.

In a recent event, the Redmond-based company has taken the wraps off its new product called the Dynamic 365 Connected Spaces, which aims to unlock data for retail space optimization through the utilization of AI-powered skills. Moreover, the company unveiled its mixed reality overlay service, Mesh for Microsoft Teams, which will allow users to collaborate in virtual spaces, sharing holographic experiences. The roll-off of those products, together with their expansion in gaming, could act as a game changer towards the company's race for the metaverse. 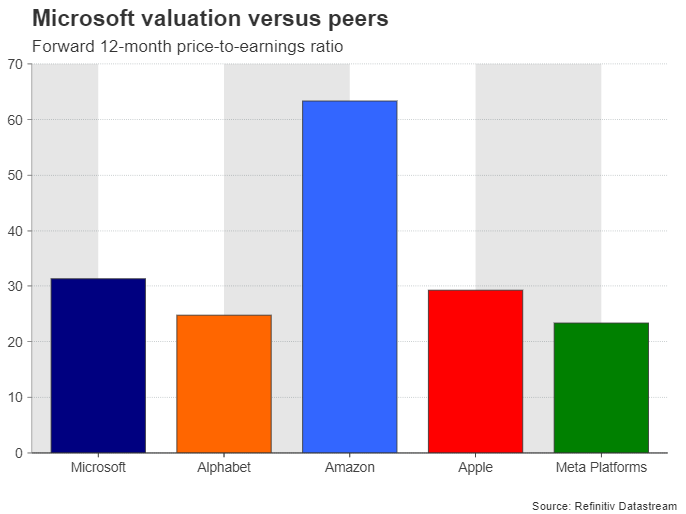 The tech giant is facing fierce competition in its cloud sector, with Alphabet investing aggressively in Google Cloud to bridge the gap with Azure and Amazon Web Services. Competition is also extending to the workforce as Microsoft’s augmented-reality team has reportedly lost around 100 experienced employees over the past year, with most of this talent heading into Meta. If this brain drain continues heading into 2022, Microsoft could find itself trailing in the contest for the Metaverse.

Chip shortages which are likely to persist throughout 2022 are another headwind for the company as that could continue to weigh on revenues from the Surface family of computers, Xbox devices and other computers that carry Microsoft’s software. Moreover, the Redmond-based giant’s share price could be adversely affected by the ongoing portfolio rebalancing away from the tech sector in anticipation of higher interest rates.

Management comments to be the key driver

According to Refinitiv estimates, analysts target $50.9 billion in revenue and $2.31 in earnings per share for the second quarter, marking a 18.1% and 13.9% year-over-year growth, respectively. The quarterly report is also expected to show robust growth in revenue across each segment, with the Intelligent Cloud sector looking for a 24.3% year-over-year growth. Moreover, the upcoming financial statements are anticipated to reflect once again the diversification efforts of Microsoft, which help the company cope better with exogenous supply and demand shocks. 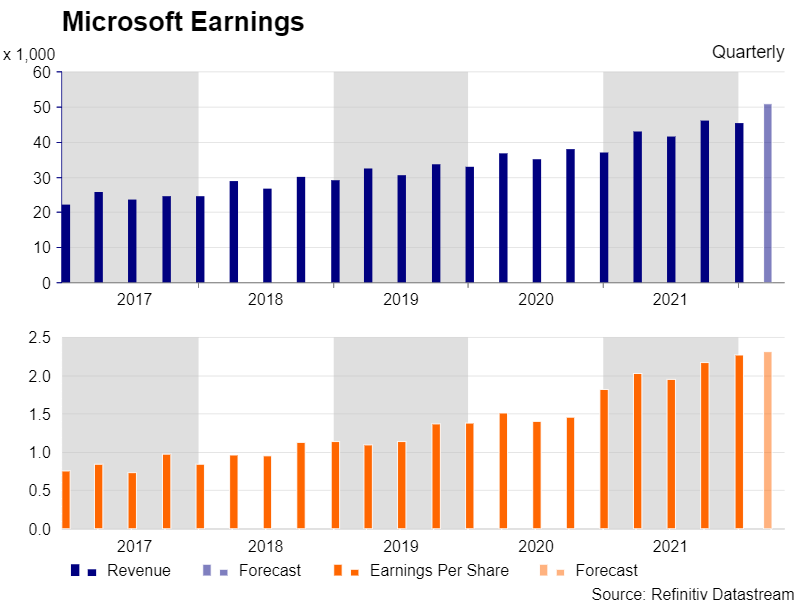 However, the spotlight will fall on management’s comments regarding the recently announced acquisition of Activision Blizzard. Investors will be focusing on remarks about the rationale behind this pricey move, and expectations about the future benefits it could provide. If comments strengthen the thesis for a long-term growth outlook and are accompanied by a strong earnings report, Microsoft’s share price could witness a significant upside.

Is the high valuation justified?

From a valuation perspective, Microsoft has a hefty forward price to earnings ratio of 31.4, which denotes the dollar amount someone would need to invest to receive back one dollar in annual earnings. However, the company trades at a premium compared with most of its peers, reflecting the perceived lower regulatory risk for Microsoft. This results from regulatory scrutiny and antitrust cases against competitors, which have weighed on their respective valuations.

Tech bulls are hoping that a strong earnings season could alleviate some of the recent ‘pain’, attributed to rising yields and expectations that the Fed will tighten its monetary policy to combat surging inflation. Taking a technical look at its stock, better-than-expected results could push the price towards the 305.8 hurdle before buyers shift their attention to the 317.3 resistance.

To the downside, should the numbers come out worse-than-expected, the bears might send the price to test the region which includes the 200-day simple moving average (SMA) and the 290.55 obstacle, before eyeing the 280.25 barrier.