A raft economic data are due out of the UK this week ahead of a Bank of England policy decision. Inflation and retail sales figures will be released at 09:30 GMT on Wednesday and Thursday, respectively, to be followed by the BoE announcement at 12:00 GMT on Thursday. But with the UK Parliament in deadlock over Brexit and the European Union refusing to give further ground on the Irish backstop issue, pound traders will likely stay on the sidelines until some clarity is shed on what comes next.

British GDP grew a solid 0.6% during the third quarter from the prior period, outperforming the Eurozone. However, all the indications are the economy is heading towards a sharp slowdown in the final three months of the year. Any negative surprises therefore in this week’s numbers could add to the negative risks for sterling, exaggerating potential downside moves from any unfavourable Brexit-related headlines.

The first set of data to be watched this week are the inflation figures on Wednesday. The UK’s headline CPI rate was unchanged at 2.4% year-on-year in October. It is forecast to moderate to 2.3% in November, which, if confirmed, would make it the lowest since March 2017 and ease the need for the Bank of England to raise interest rates in the coming months. The core rate is also expected to head lower in November, to 1.8%. 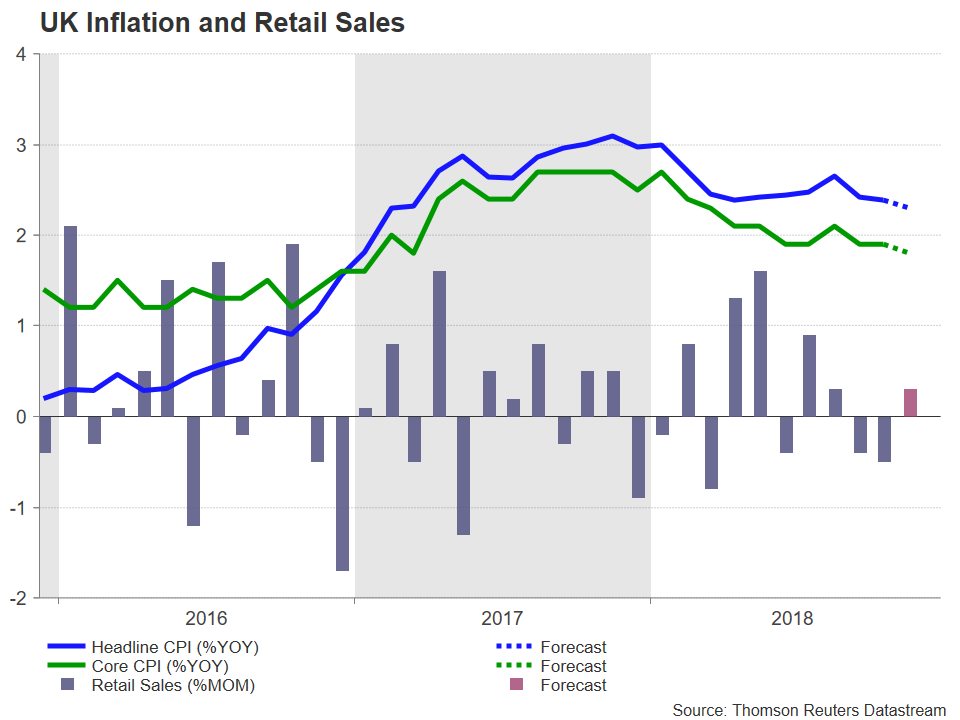 Moving to the retail sales numbers, they are forecast to have risen by 0.3% month-on-month in November, following a 0.5% dip in the prior month. However, on an annual basis, retail sales are expected to have slowed from 2.2% to 1.9%. A stronger figure would suggest consumer spending is holding up well in the current quarter and that fears of a marked deterioration in growth may have been overdone. Similarly, a disappointing performance by retailers would worsen the gloom for the economy.

Finally, on Thursday, the Bank of England is widely anticipated to hold its key rate unchanged at 0.75%. There is no press conference or quarterly inflation report at the December meeting, so the event may fail to see much market reaction. However, with the fate of Theresa May’s hard-negotiated Brexit deal looking uncertain and with the possibility of British businesses being stuck in limbo for longer, the Bank may raise concerns about the outlook in its statement.

A more cautious statement, along with a broadly unimpressive data, could push sterling towards the recently congested area around $1.2540. A breach of this region would bring prices within scope of last week’s 20-month low of $1.2475. Deeper losses could risk a test of the $1.24 handle, which is just above the 161.8% Fibonacci extension of the October-November upleg from $1.2694 to $1.3174.

It’s worth pointing out though that even as the UK government steps up preparations of a no-deal Brexit, many investors are with the view that lawmakers are likely to block such a move by the May government. Hence, this explains why the pound’s latest sell-off hasn’t been more dramatic.

Alternatively, a surprisingly strong set of numbers and/or a not-so-pessimistic Bank of England could help the pound take further advantage of the current bout of dollar weakness. Sterling could break above immediate resistance around the $1.27 mark, with sharper gains bringing into focus the next psychological level at $1.28, which is just above the 78.6% Fibonacci retracement level. Higher up, further advances could stall at the 61.8% Fibonacci level of $1.2877.