Third-quarter GDP numbers out of Canada will hit the markets on Friday at 13:30 GMT. Forecasts point to a notable slowdown, but that would still be in line with the Bank of Canada’s (BoC’s) latest forecasts. As for the loonie, the risks continue to appear asymmetric. Market pricing for BoC rate cuts remains muted, even though the Bank itself stated that the bar for an ‘insurance cut’ is low. Hence, any disappointing piece of news could send the loonie plunging, whereas any encouraging developments may not be able to lift it much.

Unlike almost all of its major peers, the Canadian economy remains in a healthy position, showing little signs of damage from a deteriorating global outlook and the erratic trade war. Inflation is almost exactly in line with the BoC’s target of 2%, while wage growth has picked up significant speed both in nominal and real terms, putting more money in the pockets of consumers – an encouraging sign.

Yet, the nation’s central bank made it clear it may still cut rates soon, despite the solid domestic picture. The reasoning is that even though Canada has been resilient so far, there are clear downside risks emanating from trade tensions that could eventually infect the domestic economy, especially given its reliance on commodity exports. 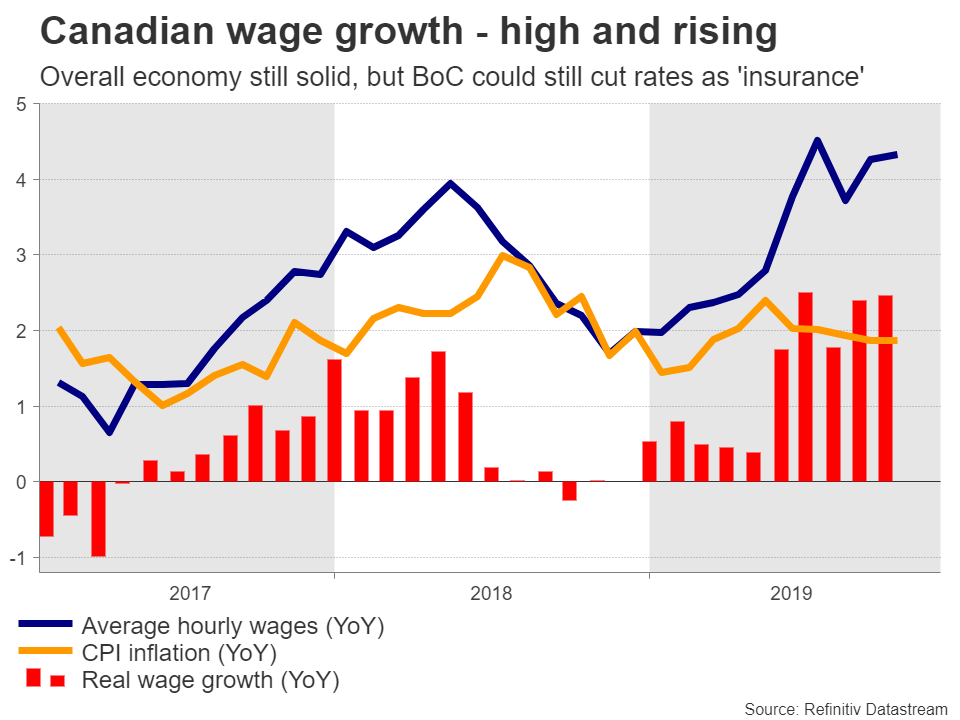 In this context, Governor Poloz indicated – in no uncertain terms – that it wouldn’t take much for rates to be cut as ‘insurance’ against trade uncertainties. It might not even require a clear deterioration in the local data. If trade tensions reignite, that could also do the trick.

In the markets, investors are still not convinced a cut is coming. Pricing derived from Canada’s overnight index swaps currently implies almost no chance of a cut in December, which increases to a one-in-three chance for the January meeting. Even so, one-in-three is relatively conservative, and it may be understating the actual likelihood of a cut. Poloz and his colleagues have repeatedly proven they aren’t shy of surprising the markets in recent years.

All this implies that the risks surrounding the loonie are asymmetric, and tilted to the downside. Market expectations for a cut are subdued already, so if economic data and trade developments remain encouraging, that may push the loonie higher but only modestly. There isn’t much to price out in terms of rate cuts. On the contrary, any weakness in domestic data or another escalation in the trade war could finally convince investors that the BoC may cut and push the currency significantly lower.

In other words, the ‘surprise’ would be any signs that rates will be cut, so the market reaction in that case would likely be greater.

As for this week’s GDP data, the forecast is for a 1.2% annualized print in Q3. While that would mark a notable slowdown from the 3.7% in Q2, it would still be almost exactly in line with the 1.3% that the BoC itself penciled in its latest forecasts. Hence, unless we see a significant deviation from the consensus, any major market reaction is unlikely.

Taking a technical look at dollar/loonie, initial resistance to advances may be found near the 1.3345 region, which capped multiple rallies in recent months.

On the downside, if the GDP data are stronger-than-expected for example, the pair could test the 1.3200 territory, where the 50-day SMA at 1.3215 is also roughly located.