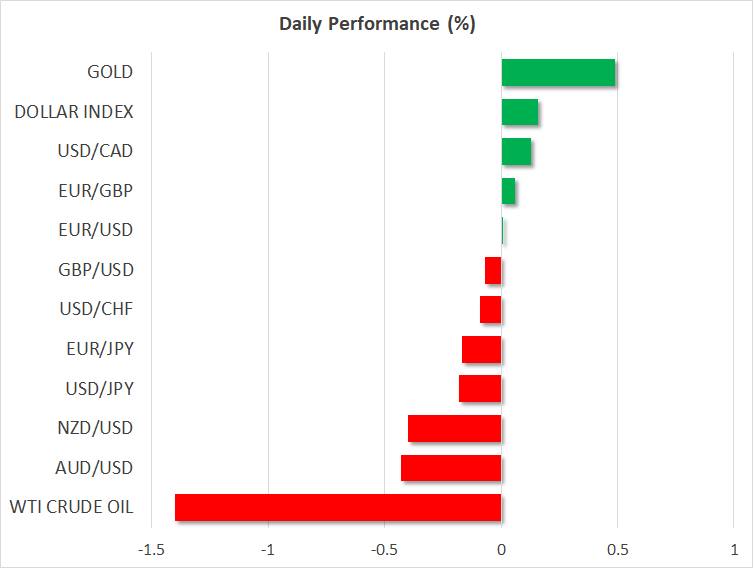 US tech giant, Apple Inc, issued a rare profit warning on Monday, saying it will miss its first quarter revenue guidance as the coronavirus outbreak affects both production and demand in China. Apple CEO Tim Cook cited “a slower return to normal conditions than we had anticipated” in a staff memo, raising concerns that the fallout from the virus will not be quite as temporary as many investors had initially estimated.

Widespread shutdowns in the Chinese provinces that have been worst hit by the epidemic have caused a serious disruption to supply chains, creating shortages of parts and components for companies globally. With stock markets around the world currently riding high near record levels, the risk of a sharp correction is rising as the virus impact becomes more evident and more companies lower their earnings guidance.

US stock futures fell sharply on Apple’s revenue warning, with the Nasdaq Composite falling the most – it was last trading 0.7% lower. Shares in Hong Kong and Japan also tumbled, though Chinese stocks pared earlier losses to head higher on hopes that authorities will announce more stimulus measures in the coming days.

China’s central bank has already injected billions of yuan into money markets and after yesterday cutting the medium-term lending rate, there are expectations that it will also cut its loan prime rate on Thursday.

A slowdown in the number of new coronavirus cases and deaths recorded yesterday may have also helped limit the sell-off from Apple’s negative headlines but safe-haven assets were telling a different story.

Gold – the traditional haven asset – climbed to a two-week high of $1589.10 an ounce on Apple’s news, indicating that investors continue to hedge against a far greater economic hit from the virus than what equity markets are signalling.

The risk-off tone was also driving oil on Tuesday, with WTI and Brent crude prices off by between 1.5%-1.8% amid fading hopes that OPEC and its allies will be able to agree to emergency production cuts to counter the deteriorating demand outlook.

Pound and euro on the defensive

In currency markets, risk appetite was in short supply too, with the safe-haven yen advancing against all of its major peers, even the US dollar. Dollar/yen was 0.1% weaker at 109.73 as investors awaited US traders to return from yesterday’s President’s Day holiday. In the meantime, the dollar scaled 4½-month peaks against a basket of currencies, as the pound and euro floundered.

Sterling came under pressure on Monday after Britain’s top Brexit negotiator, David Frost, told his EU counterparts in a speech in Brussels that the UK is determined to set its own rules and will not sign up to European regulation in a post-Brexit trade deal. Frost’s speech reignited fears of a ‘hard’ Brexit as the UK pushes for a loose trading relationship with the EU after the transition period ends on December 31. The pound slipped below the key $1.30 level and the immediate focus now is on the onslaught of UK data expected this week.

The euro was also struggling as it stuck close to yesterday’s 34-month low of $1.0820. Traders will be watching the ZEW economic sentiment gauge out of Germany shortly for any signs of damage to businesses from the coronavirus. A meeting of EU finance ministers yesterday where they discussed a possible loosening of the fiscal purse strings did little to convince markets that a fiscal stimulus in Europe was forthcoming.

But the worst performer on Tuesday was the Australian dollar (-0.6%) as apart from the growing concerns about the virus outbreak, there was fresh speculation of a rate cut. The Reserve Bank of Australia rekindled expectations of policy easing after the minutes of the February meeting revealed that the discussion for a rate cut went far deeper than initially suggested.