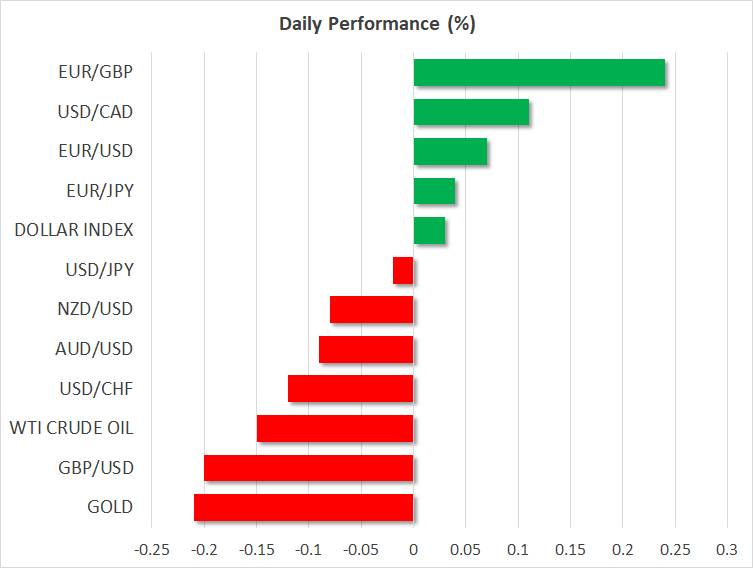 Relations between the United States and China got a boost on Monday after the US Treasury Department decided to no longer designate China as a currency manipulator. The announcement, which comes just two days before the two countries are expected to sign the highly anticipated ‘phase one’ deal, is seen as a gesture of goodwill that should appease the Chinese side, which viewed the largely symbolic label in place since August as offensive.

Risk assets rallied and safe havens sagged following the news as the Treasury Department’s decision underlines the positive mood going into tomorrow’s signing ceremony. Stocks in New York hit fresh records, with the S&P 500 and the Nasdaq Composite both closing at all-time highs.

Further underscoring the risk-on sentiment were upbeat trade numbers out of China that were well above expectations. Exports from China jumped by 7.6% year-on-year in December and imports soared by 16.3% y/y, indicating a rebound in both domestic and global demand at the end of 2019.

The data helped the yuan shoot higher to a 6-month high against the US dollar. However, Chinese stocks struggled to maintain upside momentum and the main indices gave up earlier gains to end the day about 0.3% lower, perhaps suggesting that the rally may not have a lot of legs left now that the ‘phase one’ deal is almost completed.

European and US equity futures also turned negative in a possible sign of caution as investors await the publication of the ‘phase one’ deal on Wednesday to assess whether the agreement is comprehensive enough to substantially de-escalate the still brewing trade war.

The US dollar hit the highest against the yen in more than seven months on Tuesday, breaking past the psychologically important 110 level. The yen declined across the board at the start of the day before firming slightly but another safe haven – gold – remained in the red to trade around $1545 an ounce.

Against a basket of currencies, the dollar index was marginally higher, holding within its recent tight range. December inflation numbers in the form of the consumer price index may provide the greenback some direction when they are released later in the US.

The euro also moved in small steps, inching up to $1.1138, while sterling steadied somewhat after hitting a near 3-week low of $1.2950 earlier in the day.

The pound skidded on Monday after monthly GDP data showed the UK economy unexpectedly contracted in November, adding fuel to speculation that the Bank of England will cut interest rates at the end of the month.

Investors have priced in an almost 50% probability of a rate cut at the January 30 meeting. Should more BoE policymakers come out in the coming days in support of a rate reduction, there is scope for further steep losses in the pound.

Banks to kick off earnings season

With the trade war story soon expected to move into the background, temporarily at least, US corporate earnings will become the main driver on Wall Street. Citigroup, Wells Fargo and JP Morgan Chase are scheduled to announce their Q4 earnings results before the market open.

With fourth quarter earnings not anticipated to impress given the softness in the economy during the period, the focus will be on their guidance for the current and next quarters. As the US stock market looks increasingly overvalued after a spectacular 3-month rally, shares are at risk of sharp correction should companies’ guidance fail to match investors’ high expectations.