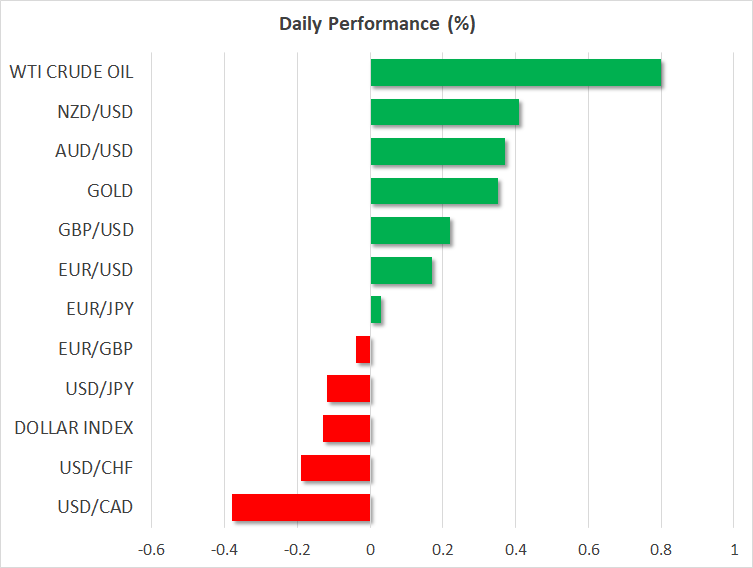 Just as markets were reconsidering the likelihood of a large 50 basis points cut by the Federal Reserve this month, stronger-than-anticipated data out of the United States dampened those expectations. Core inflation, according to the consumer price index, rose by a larger-than-expected 0.3% month-on-month in June, the biggest increase since January 2018, pushing up the annual rate to 2.1%.  An unexpected drop in the latest weekly jobless claims also called into question the urgency for a 50-bps rate cut.

Subsequently, the odds for a 50-bps reduction eased to 17.5% from around 25% yesterday, when they’d surged on the back of Fed Chairman Jerome Powell’s dovish tone in his semi-annual testimony before Congress on Wednesday and Thursday. The paring back of expectations of an aggressive rate cut lifted the dollar from yesterday’s near one-week lows against a basket of currencies, while against the yen, it recovered back above the key 108 level.

The dollar is likely to face further volatility in the lead up to the July policy meeting at the end of the month as investors try to gauge how aggressive the Fed will be and fed funds futures react to the incoming data. The next major release that is likely to be significant for rate cut bets is the US retail sales report on Tuesday.

Euro firmer even as ECB hints at more stimulus

The euro extended its gains on Friday as the dollar’s bounce back from the strong US data proved short-lived. Expectations that the European Central Bank could soon be joining the Fed in easing policy wasn’t enough to curtail the euro’s rebound, as the single currency climbed to around $1.1265 at the start of European trading.

However, with investor expectations of ECB action in the coming months already running high following Mario Draghi’s comments at the ECB forum in Sintra in June, the market reaction to the minutes was muted, with even European shares not receiving much of a boost.

Oil and gold up on trade and Middle East tensions

Oil prices were trading not far from yesterday’s 1½-month highs as declining crude oil inventories in the US and rising tensions between Iran and the West pointed to possible supply disruptions. Meanwhile, a tropical storm heading for the Gulf of Mexico has led to the evacuation of oil rigs in the region, adding further upside pressure on prices. WTI oil was last quoted at $60.65 a barrel with Brent crude trading just above $67 a barrel.

Gold also benefited from the increased tensions in the Middle East as the US is planning on sending military escorts to vessels in the Gulf after Iranian boats tried to intercept a British oil tanker on Wednesday. The precious metal was additionally boosted from a tweet by President Trump yesterday, who was once again stoking trade tensions with China, accusing the nation of “letting us down” for not buying US agricultural products as they had pledged. Gold was 0.5% firmer on Friday as Trump’s tweet reminded investors that the trade dispute is not likely to go away anytime soon.