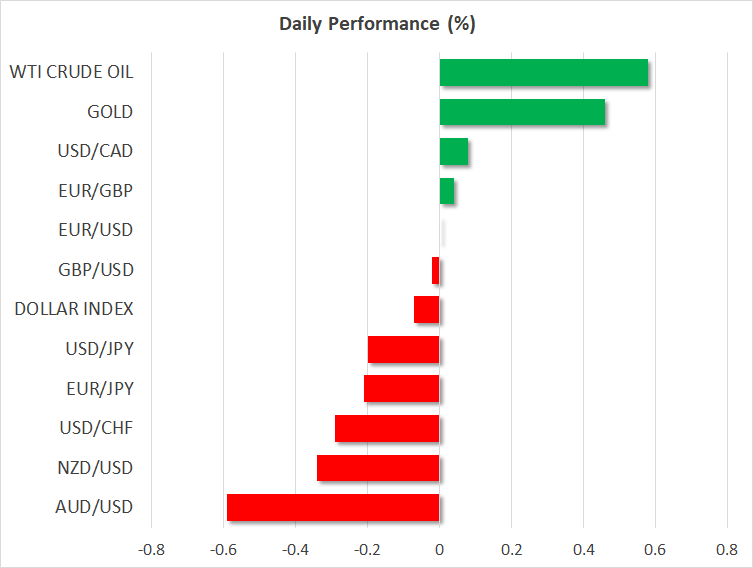 Germany dodges a recession, but euro can’t catch a break

Europe’s largest economy narrowly escaped a technical recession in Q3, with GDP growth clocking in at 0.1% in quarterly terms, overcoming the consensus for a negative 0.1% print. It appears that the recession in the German manufacturing sector didn’t quite infect the much larger service sector as much as PMI surveys suggested throughout Q3. That said, last quarter’s number was revised lower into negative territory, keeping a lid on optimism.

While it’s great news that Germany dodged this proverbial bullet, economic growth is still virtually stagnant and there’s nothing encouraging on the horizon to suggest a real turnaround, which likely explains why the euro barely reacted.

The outlook for the single currency remains bleak, because German recession or not, growth in the euro area is slowly but surely faltering – and the bloc’s institutions lack the necessary tools to counter this weakness. Monetary policy is already at its limits, and with Germany having avoided a downturn, any substantial fiscal stimulus package to boost growth is now probably out of the question for the foreseeable future.

From this lens, and paradoxically, Germany dodging a minor slump may in fact be bad news for the entire Eurozone, as it diminishes the chances for meaningful fiscal action.

American equity markets continued their march higher, with the S&P 500 (+0.07%) and Dow Jones (+0.33%) recovering some early losses to close at fresh record highs, the latter drawing strength from a solid jump in Disney shares (+7.3%). The latest US CPI data likely assisted the rally. The core rate surprisingly declined, raising bets that the Fed could cut rates again in March, the implied probability for which now rests at ~43% from around 35% earlier. Expectations for cheaper borrowing costs typically benefit stocks.

What stands out is that investors keep ignoring discouraging trade news. The latest headlines suggest that besides disagreeing on the timeline for removing tariffs on each other, the US and China have also hit a wall on the size of agricultural purchases – with Beijing unwilling to put a clear dollar amount on how much it will buy.

The point here is twofold. First, even a phase one deal is no longer certain given these setbacks, and considering how much markets have rallied on trade optimism lately, the risk of a correction has risen notably. Second, if the two sides can’t agree on the simplest of issues – like how quickly tariffs will be rolled back and how much agricultural product China will buy – who really believes we can get an agreement on much more complex issues, such as intellectual property protection?

Futures point to a slightly lower open on Wall Street today, though that seems owed mainly to the weaker-than-expected Chinese data overnight, as well as jitters about the intensifying situation in Hong Kong.

Overnight, Australia’s employment data for October missed their mark, with the net change in employment surprisingly coming in negative. The aussie dropped sharply, as investors priced in a greater likelihood for more RBA rate cuts going forward, given how much emphasis the central bank puts on the labor market.

On the data front, UK retail sales for October and the Eurozone’s second reading of GDP for Q3 could attract attention.

Also keep in mind that President Trump hasn’t announced his decision on European car tariffs yet. 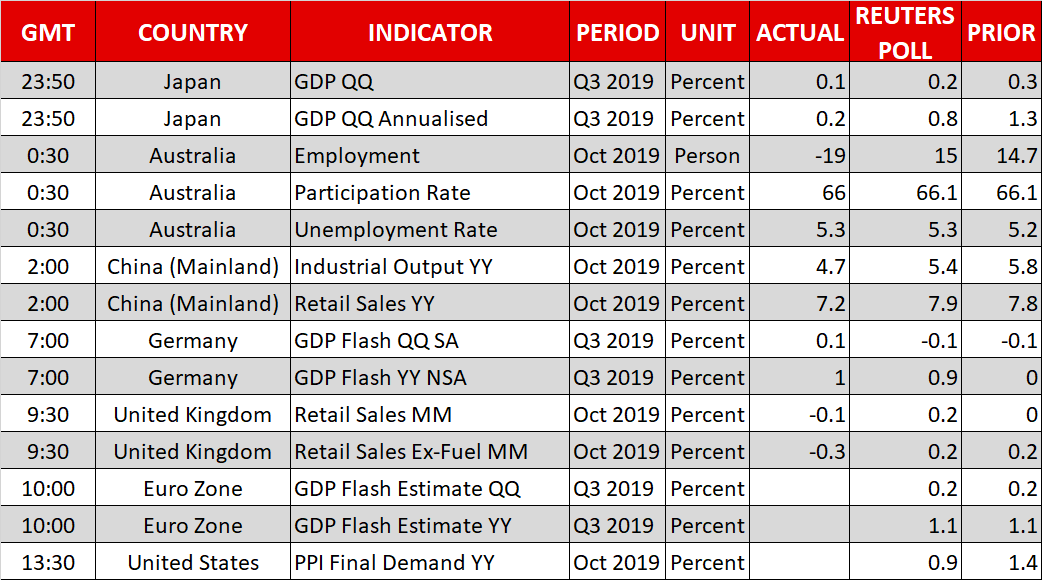