Posted on May 22, 2020 at 8:34 am GMTMarios Hadjikyriacos, XM Investment Research Desk 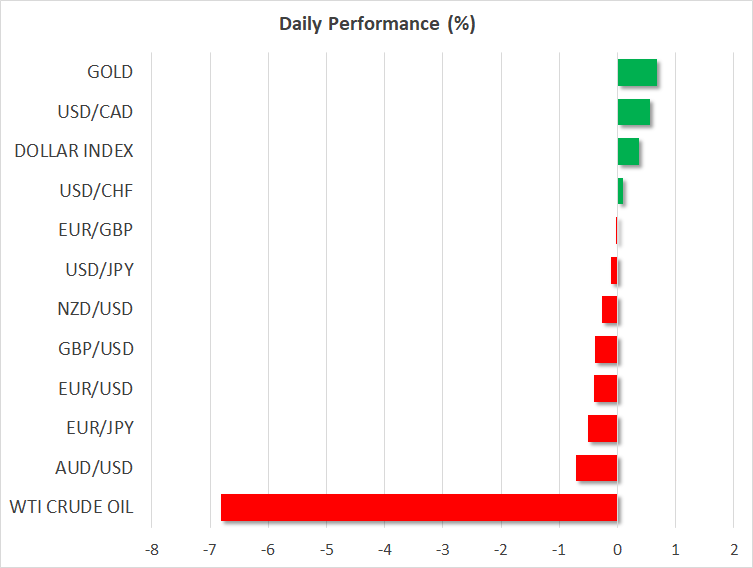 Global risk appetite crumbled on Friday, after China announced plans to establish an ‘enforcement mechanism’ for ‘safeguarding national security’ in Hong Kong. The news came hot on the heels of legislation to curb secession and sedition movements in Hong Kong.

In plain English, that means China is tightening the screws on Hong Kong’s pro-democracy movement, in a move that would likely erode the high degree of independence that the city has so far enjoyed from Beijing. Beyond raising concerns that this could resurrect the street protests that ravaged Hong Kong’s economy last year, the move could also lead the US to revoke the city’s special trading privileges, which are conditional on a high level of autonomy.

Why does it matter? Hong Kong is a major dollar-clearing hub for China, so if its special financial status under US law are revoked, that could choke off a vital source of USD liquidity for China, crippling many import-oriented sectors that rely on the US currency to function smoothly. Naturally, that would mark a huge escalation in the economic war between the two nations, inevitably drawing retaliation from Beijing.

Asian equity markets were an ocean of red, with Hong Kong’s battered Hang Seng index leading the way lower at -5.5% and futures pointing to a -1% open for the S&P 500 when Wall Street opens today, ahead of a long weekend in America.

In the FX spectrum, the defensive plays came roaring back, with the yen and dollar leading the way higher as investors braced for America’s response. Earlier on Thursday, President Trump promised he would react “very strongly” if China followed through on the proposal, so China pushing through with it all but guarantees US countermeasures.

Meanwhile, commodity currencies and the euro went into reverse, erasing some of their recent gains in the face of more geopolitical tensions and a bleaker outlook for global trade. President Trump has made China a centerpiece of his election strategy, consistently blaming Beijing for the pandemic, and this is just another development that will make it easier for him to harness anti-China sentiment.

Back to the markets, the news kneecapped the attempt of many charts to break out of their recent trading ranges and enter more optimistic waters. The S&P 500 and the Australian dollar both posted new highs this week in what seemed like a breakout, but have since retreated to re-enter their previous ranges, while the euro was rejected from near $1.10 and has turned lower. The Canadian dollar is a similar story.

When multiple charts confirm each other like that, it’s a strong signal that the market as a whole hasn’t ‘turned the page’ yet, and that pockets of uncertainty are still very much in play.

Over the coming weeks this will be a crucial spot to watch. If all these charts continue to retrace within their ranges, then investors are still collectively hesitant to trust this recovery, whereas a simultaneous breakout would signal that we’ve entered a new, more positive trading paradigm.

For now though, a lot will depend on how powerfully the US reacts. The worst-case scenario for markets would be if the US moved to revoke Hong Kong’s special status.