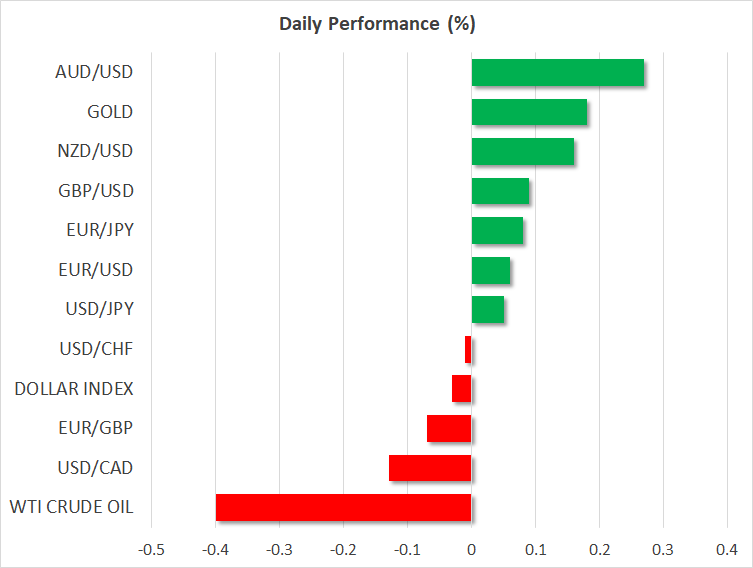 The world’s reserve currency shined once again on Friday, after US payrolls for January exceeded estimates, prompting traders to push back the expected timing of the next Fed rate cut. Nonfarm payrolls rose by 225k, smashing the forecast for a 160k increase and signaling that the labor market continues to fire on all cylinders. Admittedly though, some downward revisions to jobs growth in 2018-2019 put a lid on the market’s enthusiasm.

Average earnings accelerated to 3.1% in yearly terms, and while the unemployment rate ticked up, that was for ‘healthy reasons’ as the labor force participation rate increased by a greater degree, indicating that more people were interested in finding work. This shows that previously discouraged workers are still returning to the labor market now that jobs are plentiful and wages are growing.

As a result, traders scaled back bets for a Fed rate cut in the first half of the year, as the economy doesn’t seem in need of more stimulus for now. However, the data only pushed back the timing of when traders expect a cut rather than dispel expectations completely, with markets still discounting one-and-a-half rate cuts by December. In other words, investors are saying that a healthy jobs market is encouraging, but merely delaying the inevitable in a soft global environment.

As for the dollar, its bullish run lately is a testament to the outperformance of the US economy, especially relative to the growth-starved Eurozone. In short, there’s no alternative to the greenback right now, which offers a special blend of safety and high(er) interest rates compared to the euro or yen. For this narrative to change, either the Fed needs to start cutting rates aggressively, or the Eurozone has to roll out a big spending package to boost growth and lift the euro, neither of which seems likely anytime soon.

Coronavirus worries continued to haunt the broader market on Friday, with US stocks snapping a four-day winning streak and the defensive Japanese yen outperforming even the turbocharged greenback, following reports of more supply chain disruptions in China.

On the bright side though, sentiment stabilized on Monday. The yen is surrendering its gains and Wall Street futures are pointing to a flat open today, as investors seem to have taken heart from the slowdown in the number of confirmed new virus cases in recent days. The caveat is that the official figures may be underestimating the actual number of infections due to capacity and reporting constraints in Wuhan.

In the big picture, investors are still weighing the breadth and length of potential supply chain disruptions against the encouraging signs that the virus is being contained. For now, the optimistic narrative seems to be winning out, possibly on hopes that the hit on global economic activity will ultimately be short-lived.

The Canadian dollar briefly spiked higher on Friday after the nation’s employment data for January were much stronger than expected, dashing expectations for a near-term BoC rate cut. Yet, the loonie quickly gave up its gains to trade lower against the dollar as investors turned their focus to oil prices, which can’t get off the floor despite OPEC hints for more production cuts.

Meanwhile, the Australian dollar carved out a new 11-year low against its American cousin on Friday, as some downbeat forecasts by the RBA kept a rate cut in play and risk sentiment remained sour overall. Yet, the aussie found fresh buy orders and is clawing its way back today, drawing strength from the calmer risk mood as well.

Looking ahead, the aussie’s fortunes are tied to how the virus theme plays out, given the implications for commodity prices and Australia’s close trading relationship with China. If virus concerns continue to fade, the currency could jump eventually as some shorts are squeezed out after the violent downtrend lately.