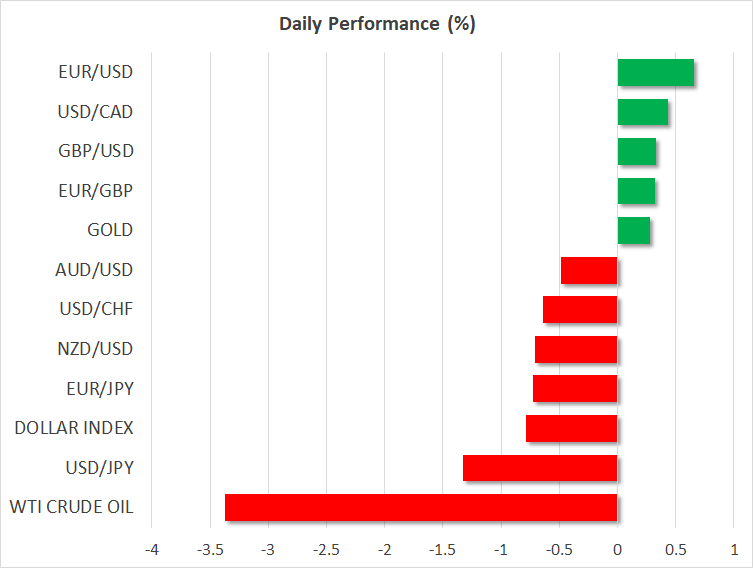 Fed cuts rates to 0% but investors fear the worst

An unprecedented wave of central bank intervention was unable to restore order in the markets on Monday even as policymakers stepped up their response to the coronavirus crisis. The Federal Reserve slashed its benchmark rate by a full 100 basis points (bps) on Sunday – it’s second emergency cut this month, bringing the target range back down to 0-0.25%. But the measures didn’t stop there as the Fed also said it will buy $700 billion worth of Treasuries and mortgage backed securities to shore up liquidity in the financial system.

In another extraordinary move, the Fed announced a coordinated action with other major central banks to bolster US dollar liquidity via swap line arrangements – something not seen since the 2008 financial crisis.

The Reserve Bank of New Zealand swiftly followed the US central bank by reducing its official cash rate by 75 bps in an unscheduled meeting overnight, while the Bank of Japan ramped up its purchases of exchange-traded funds and real-estate funds at an emergency session of its own today.

Last week, the Bank of Canada and the Bank of England both cut rates by 50 bps in response to the virus fallout but the European Central Bank only went as far as announcing measures to boost lending by commercial banks, drawing criticism once again for doing too little too late.

All this, however, failed to ease the anxiety in the markets and might have even spooked investors even more as they face the reality of severe disruptions to economic activity globally for the next month at least.

France and Spain joined Italy in ordering a nationwide lockdown as the virus spreads uncontrollably across the continent, while Germany and others closed their borders to try and contain the deadly disease. European Union finance ministers will be holding a special meeting on Monday to discuss fiscal measures to support their economies but given the nature of this crisis, it will require a very substantial package to ease worries that Europe is not headed for an economic catastrophe from the virus outbreak.

In the US, President Trump declared a state of emergency on Friday, allowing the release of emergency funds and the activation of measures to deal with the outbreak. However, whilst this was met positively in the markets on Friday when US stocks surged by more than 9%, the optimism is being eclipsed by the darkening outlook at the start of trading this week.

Stocks reversed sharply lower on Monday, with European indices plunging by between 7.5-10% and US equity futures dropping by around 4.5%. Losses were somewhat more restrained in Asia, with the Nikkei closing down by 2.5%.

Australia was an exception, however, as shares nosedived by almost 10% to record their worst one-day fall in 33 years. Banking and travel stocks were hit the hardest as the deepening virus crisis sounded warning bells about corporate cashflow.

Dismal data out of China this morning only added to the gloom in Australia and elsewhere. Industrial output and retail sales tumbled by 13.5% and 20.5% respectively in February, giving a possible glimpse as to the numbers other countries should expect in the coming months.

The Australian dollar briefly slipped below the $0.62 level to hit fresh 11-year lows as speculation grew that the Reserve Bank of Australia will soon announce additional easing to support the economy.

As for the US dollar, it was down almost 2% against the safe-haven yen, giving up more than half of Friday’s gains even though the decline in Treasury yields wasn’t quite as dramatic in relation to recent losses.

The euro was once again capitalizing on the greenback’s slide to recover back above the $1.12 handle, but the pound was up only marginally at $1.2310 as investors expressed concerns about the UK government’s lack of measures to limit public gatherings amid a jump in the number of infected cases there recently.