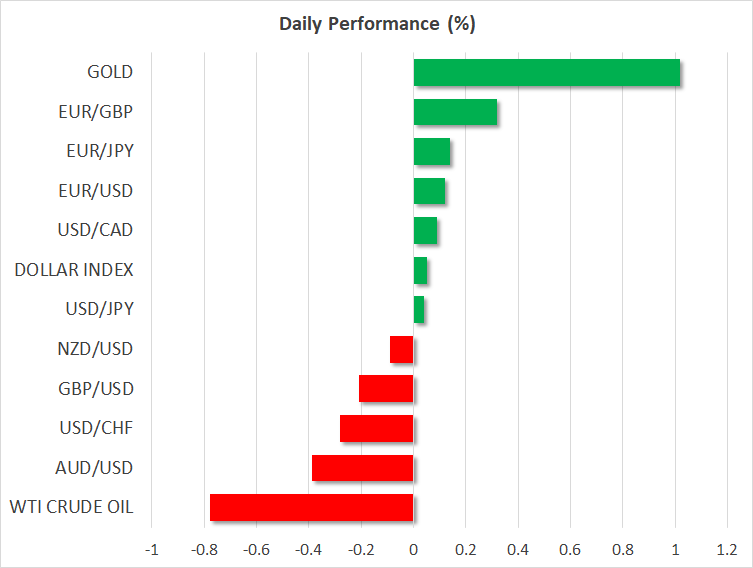 The reprieve in global markets didn’t last long, with virus worries returning with a vengeance yesterday to haunt riskier assets and boost defensive trades. US stocks opened higher but quickly wiped out those gains to close ~3% lower, while the Japanese yen – a haven asset in times of global turmoil – outshined most other major currencies.

Market sentiment took a hit as the number of infections in Korea, Iran, and Italy continued to soar, while more European countries including Austria and Switzerland reported their first virus cases, shattering the narrative that the damage would be contained to China. The dollar was broadly weaker as the flight to safety saw investors pile into US government bonds, pushing the yield on the 10-year Treasury down to a new record low and by extension, eroding some of the greenback’s interest rate advantage.

No light at the end of the tunnel?

The narrative around the virus has shifted from the short-term effects on China’s main trading partners and sentiment, to the bigger impact this will have first on supply chains and then on global demand the longer the panic persists. Two and a half Fed rate cuts are now priced in by year-end, indicating that traders expect the US central bank to come to the rescue again and ‘print this problem away’.

Alas, lowering interest rates isn’t going to fix disrupted supply chains, and monetary policy in general cannot really address supply side issues like this one. If anything, it might even exacerbate any inflationary shock that arises due to goods shortages in the short term.

Looking ahead, risk aversion could remain the main game in town. The virus is spreading quickly on a global level, and the coming weeks will see a parade of multinationals voice concerns about supply disruptions and demand, while February data out of China will illuminate the depth of the damage. What’s more, recall that China already had an over-leveraged banking sector before the virus hit, so any defaults by businesses that have seen their revenue stream dry up could cascade into a much bigger shock for the nation’s financial system.

This would imply that riskier assets like stocks might experience more pain, as investors price in contagion risk and valuations finally come back to earth. In the FX market, the yen could continue to outperform alongside the euro that is increasingly looking like a safe haven itself (see below). This would be especially true if the Fed puts a rate cut on the table soon, as investors anticipate. All that said, it’s doubtful that this the end of the downtrend in euro/dollar, and not merely a rebound.

The single currency is finally showing signs of life again, trading higher against the dollar for a fourth straight session early on Wednesday, drawing strength from the broader risk aversion.

With European interest rates now lower than those in Japan, the euro is increasingly being used as a funding currency to borrow money in and buy foreign assets offering higher returns, like US stocks. Hence, when an episode of market panic hits, the euro gains as several investors unwind their riskier carry trades and return money back to the Eurozone.

In other words, the euro is gradually stealing some demand away from the yen as a safe haven, which ultimately might suppress volatility in euro/yen on instances of market turmoil.

Elsewhere, aussie/dollar hit a fresh 11-year low earlier today after Australian construction data for Q4 disappointed. Coming on top of the sour risk sentiment, this showed that the export-heavy economy was already losing steam before the virus outbreak and the slowdown in China. Watch out for Australia’s capex data for Q4 early on Thursday.