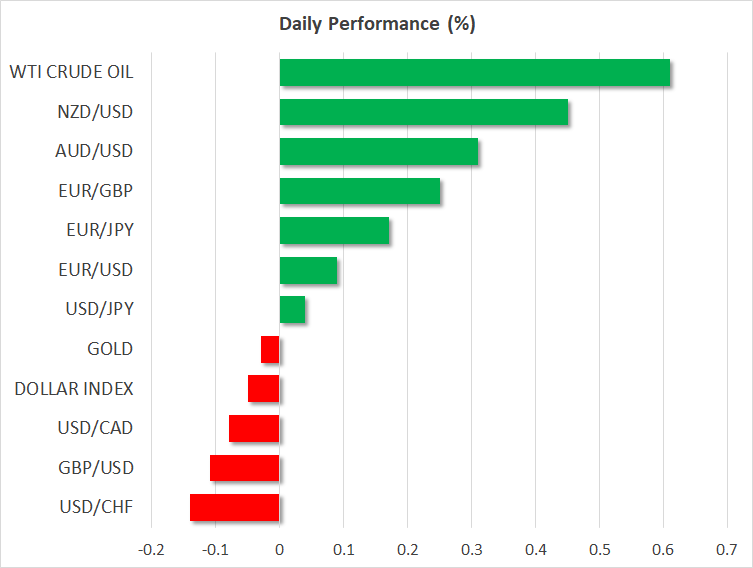 US and Chinese negotiators resumed trade talks in Washington on Monday amid a tense environment as the Trump administration added another 20 Chinese public security bureaus and 8 tech companies to its trade blacklist. Although the US decision to expand the blacklist was in response to the Chinese government’s treatment of Muslim minorities in China, the timing risks inflaming tensions between the two countries who are in the midst of a prolonged trade war.

With the two sides far apart on key issues, the prospect of a major breakthrough in this week’s talks was never lower. However, there is hope that some kind of an interim deal, potentially covering agricultural products, can be agreed upon, which would keep the negotiations open and lead to further mini deals down the line.

But judging by Trump’s latest remarks, the US is pushing for a broader agreement. Speaking on Monday, Trump said, “I would much prefer a big deal and I think that’s what we’re shooting for”. But he also said, “We think there’s a chance we could do something very substantial”, which helped lift market sentiment.

Further helping risk appetite recover was the confirmation by China that its top trade negotiator, Vice Premier Liu He, will travel to Washington on Thursday to hold senior-level talks with the US team.

Asian stocks closed sharply higher on Tuesday, shrugging off losses on Wall Street overnight, while European shares were also modestly positive. The possibility of an interim deal is driving the market optimism, but previous rounds of talks have all ended in disappointment and there’s little to suggest the latest discussions will produce anything substantial. Still, should enough progress be made so that the US decides to postpone raising tariffs on $250 billion worth of Chinese imports from 25% to 30% on October 15, this could provide the current risk-on tone an extra boost.

The Australian and New Zealand dollars also benefited from the improved sentiment, rising 0.3% and 0.4% respectively versus the US dollar, while the safe-haven yen was broadly weaker. The Chinese yuan was another star performer, gaining 0.4% against the greenback as onshore trading resumed after a week-long holiday.

Elsewhere in the currency markets, the euro was stuck within its recent range, while the Turkish Lira stabilized after plunging on Monday. The lira slumped more than 2% against the dollar after President Trump warned Turkey that if it does anything that is “off limits” in northern Syria, then the US would “destroy and obliterate” its economy.

Things aren’t particularly good for the pound either as the prospect of the UK and EU agreeing to a deal is looking increasingly slim. The British government fuelled speculation of a general election, suggesting it sees little chance of a deal, with just days left before any agreement can realistically be reached before the October 31 deadline. The EU yesterday set out a point-by-point rejection of the UK’s Brexit plan, but Prime Minister Johnson is insisting that the UK has made enough compromises and that the ball is in the EU’s court.

Should the two sides fail to resolve their differences in the coming days, Johnson is expected to file a legal challenge in the courts against the bill that would force him to seek a Brexit extension if no deal is reached by October 19.

The pound was last trading at $1.2270, while the dollar was steady against the yen at 107.19. The focus later in the day will turn to Fed Chairman Jerome Powell who is due to speak at 17:50 GMT.