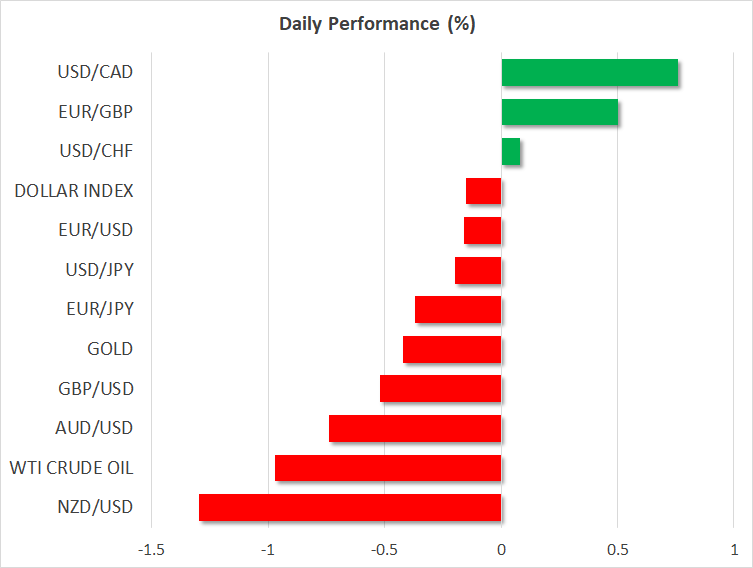 Wall Street futures in the red as Congress dithers and delays

Financial markets remain in a state of panic, with world stocks tanking on Monday to extend heavy losses from Friday, as a worsening pandemic and mounting national lockdowns leave traders no choice but to continue pricing in a deep global recession. Germany became the latest major economy to tighten its social distancing rules, shutting down all non-essential businesses and banning gatherings of more than two people to slow the contagion to a pace that won’t overwhelm the nation’s healthcare system.

Over in the US, in the absence of a nationwide lockdown, it has been left to individual states to take that decision and at the moment one in three Americans has been ordered to stay home. The lack of a coordinated federal approach is somewhat concerning, as it raises the chances of the virus infecting states that have been ‘healthy’ so far. Even more worrisome though, is what’s happening on Capitol Hill.

The highly anticipated spending package that would hopefully negate some of the virus’ economic impact failed to pass the Senate yesterday, igniting concerns of a drawn-out partisan battle at a time when stimulus is needed urgently. The negotiations between Democrats and Republicans will continue today, but the longer this process takes, the less effective the package might be in shielding an economy that is about to be hit by massive layoffs.

Look out for US jobless claims

In this sense, the most important economic release this week will be Thursday’s initial jobless claims. It will be the first piece of data to really capture the impact of the virus, and investors will be anxious to see whether consumption has already cratered with people staying at home, leading to mass layoffs at restaurants, bars, and hotels.

In the big picture, it’s still difficult to envision a conclusion to the market’s carnage. Governments and central banks have thrown everything including the kitchen sink at this issue, but a deep recession still looks inevitable, and the longer things stay shut the greater the pain will be. In financial markets, even though stocks have already collapsed, things might get even worse once official data for March reveal the true extent of the damage and multinationals start to downgrade earnings forecasts.

For the fear to subside and for the markets to truly turn around, investors might need some medical innovation first, which doesn’t seem to be on the cards anytime soon. Rather, the selling could take a breather in a few weeks, once the draconian quarantine measures in Europe start to pay dividends and new infections slow down.

In the currency arena, the defensive Japanese yen is outperforming on Monday as investors seek shelter from the virus storm. The Swiss franc hasn’t been as fortunate, though that’s owed to the SNB’s heavy hand, with data released this morning showing the central bank continues to intervene forcefully in the FX market to weaken the currency.

Across the risk spectrum, currencies of export-heavy economies are getting hammered alongside commodity prices, with the Canadian, Australian, and New Zealand dollars underperforming once again. The kiwi has been hit especially hard, after the RBNZ announced overnight it will launch a huge Quantitative Easing program to drive longer-term interest rates lower and stimulate the struggling domestic economy.

The dollar meanwhile remains resilient near its recent highs, despite the Fed’s best efforts to weaken it via opening billions in swap lines with foreign central banks, cutting rates, and ramping up bond purchases. There’s a lot of talk about FX intervention to weaken the greenback, but admittedly, the situation doesn’t look dire enough to warrant such drastic measures for now. That said, the more the dollar gains from here, the higher the likelihood an intervention materializes.